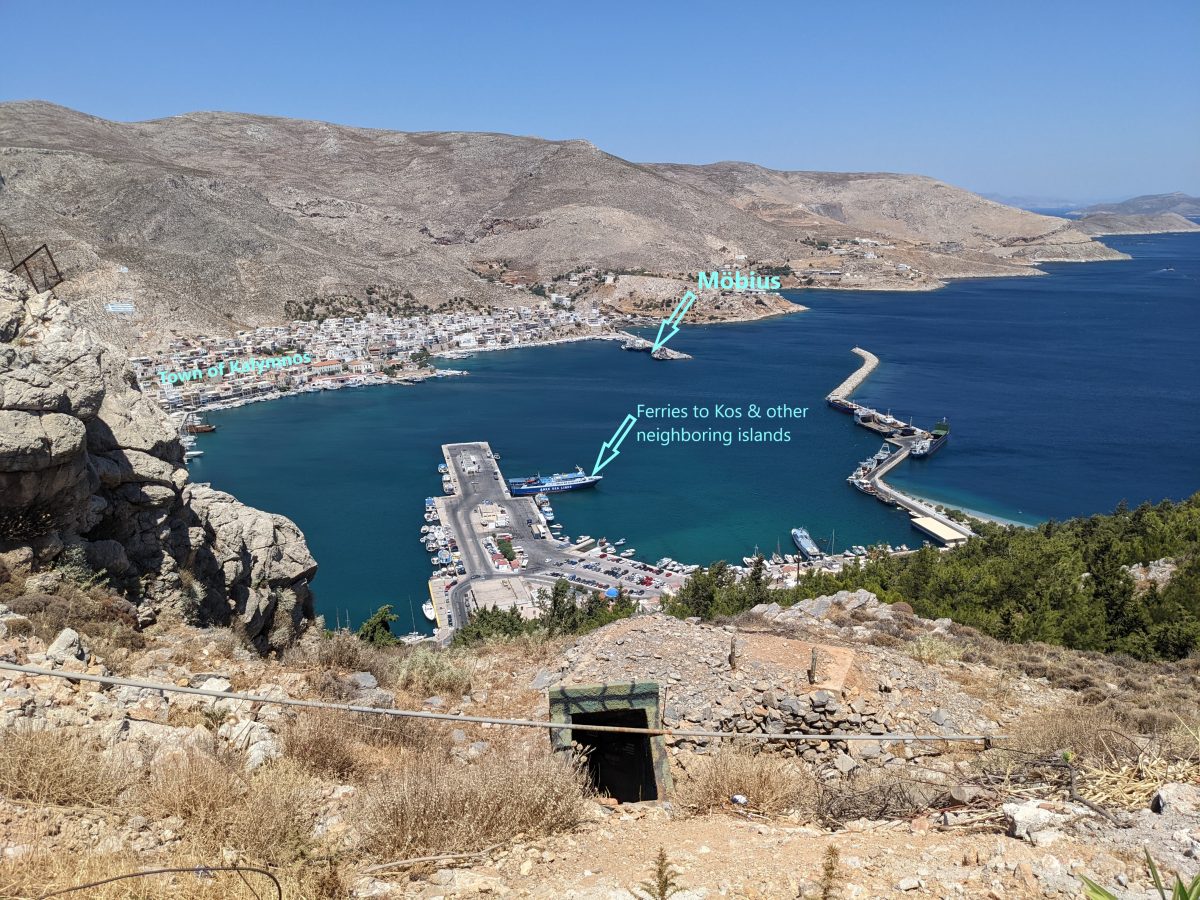 NOTE: Still have frustrating technical issues preventing me from posting this latest update as I usually do. We have been creating these posts for five years with nary a problem but suddenly it isn’t working so I’ve created this update manually direct online to just get it out while we resolve the technical issues. I’m sure you can all relate from having similar challenges with technology and appreciate your understanding and patience.

As you can see the photos are much larger and don’t expand when you click on them so I will put the relevant text below each photo. But, should give you a good overview of what’s been going on the past two weeks and hopefully the next update will be back to normal format.

Möbius is still safely docked in this beautiful harbour on the South end of the Greek island of Kalymnos and other than some very gusty Meltemi winds the last two weeks have been unusually quiet aboard with the absence of Captain Christine.  So we are down to just the three pupsketeers of Ruby, Barney and I aboard. 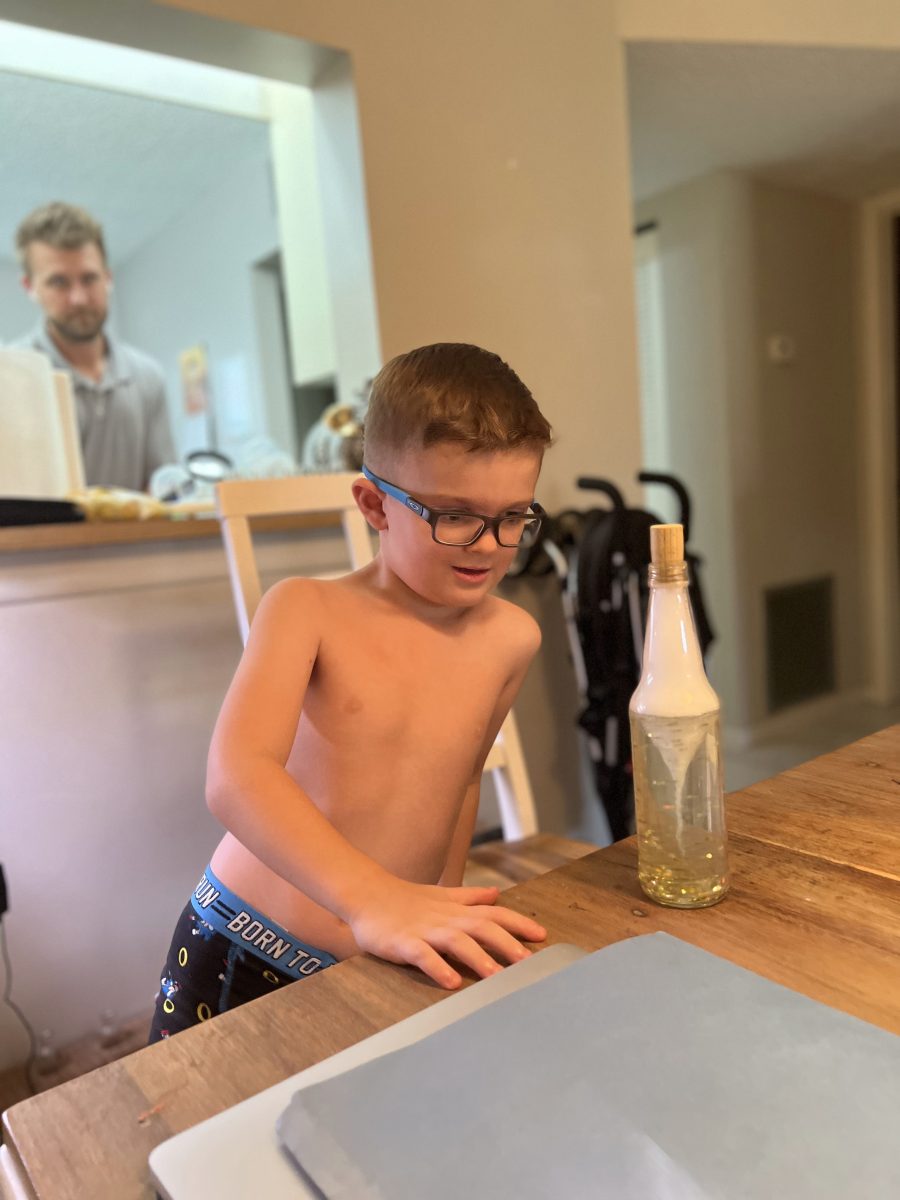 Christine has been enjoying some much needed Gramma time with our Grandson Liam and spending time with her family and friends.  Liam has always been enthralled with tornados and loves making his own in bottles like this one while his Dad, Christine’s son Tim, enjoys the glee. 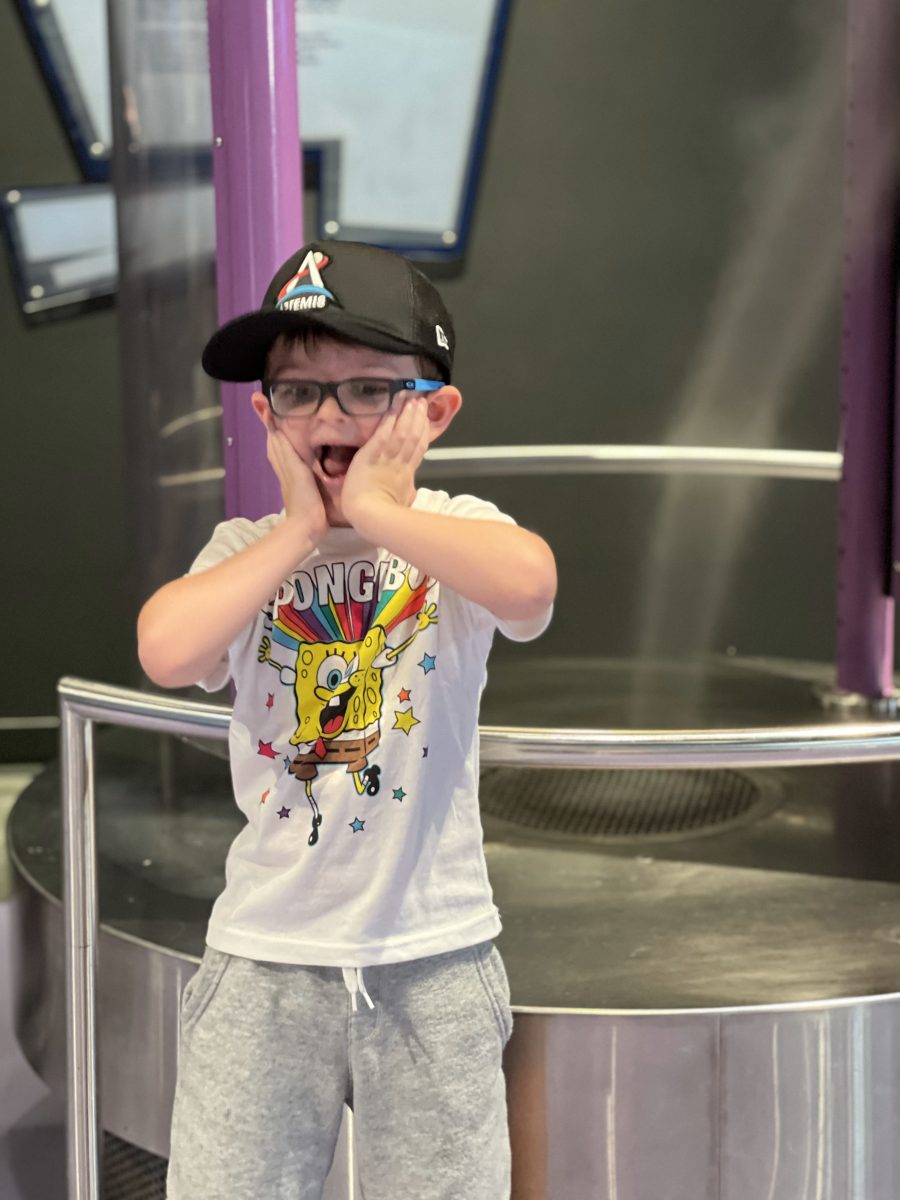 They have been enjoying outings like this one to a great hands on science museum in Ft. Lauderdale to Liam’s obvious delight. 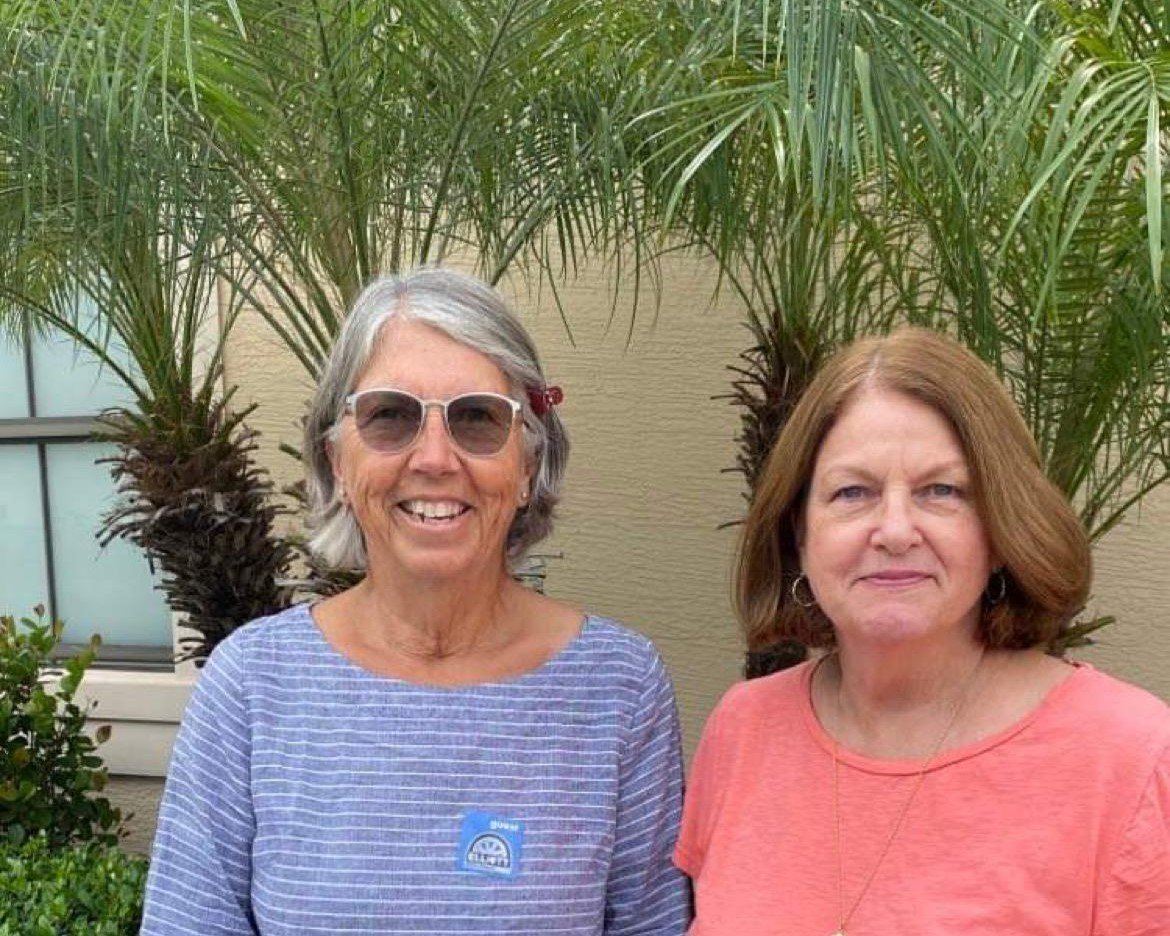 Christine has been able to squeeze in time for a new hairdo and glasses and a visit with her very dear and longtime friends Kathleen and Steve.

She will be flying back here next Monday and the pups and I will be VERY glad to have her back.

Meanwhile back on Möbius I’ve been busy with several projects and ordering boat bits we can’t get over here that Sherpa Christine can bring back with her.

I am also regularly in touch with the good people at Gardner Marine Diesel GMD as they complete the building of Mr. Gee version 2.0.  That has been going very well along with the forensic analysis of Mr. Gee 1.0 and they have been taking photos along the way and I should have more details and photos of that in the next blog post.

It took over six weeks for the engine to get from Kalymnos to the Gardner factory in Canterbury in the UK due to the huge crush of tourists in the EU this summer that took up all the spaces on the three ferries it takes to get there.  Most companies in Europe also shut down for holidays in the month of August so that delayed things further but he finally made it.  GMD have been removing all the parts that will be swapped over to the new engine.  If all continues to goes well, the new engine should be fully completed and run in on the dyno in about two more weeks and start his hopefully much faster return trip!

This part of Greece we are in has always had very strong summer winds out of the North called “Meltemi” winds which are the result of a high-pressure system over the Balkans area and a relatively low-pressure system over Turkey.  Most of the time they are good news to us as they provide a natural form of air conditioning to keep you cool day and night.  Typically these gust up to 25 knots or so but in the wee hours on Monday they gusted up to over 50 knots! (57 MPH/92KPH)

Which leads me to the title of this week’s post…….

Things were howling pretty good all night but about 3AM there were several huge crashing sounds up on deck above where I was sleeping in the Master Cabin so I scrambled out of bed and up on deck to see what was going on. 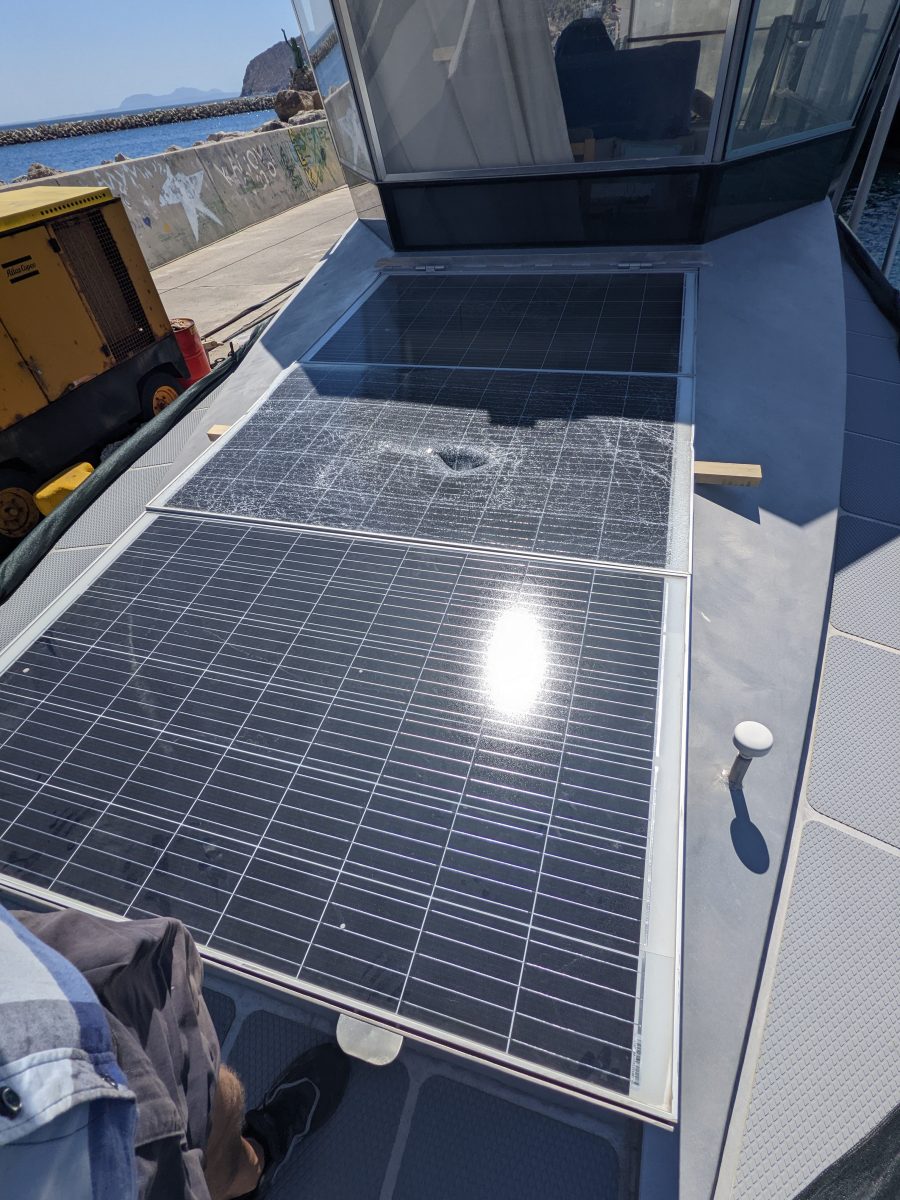 In the early morning darkness it took me awhile to figure out what had happened but became pretty clear when I got up on the forward deck, turned around and looked back over the hinged solar panel array in front of the SkyBridge. 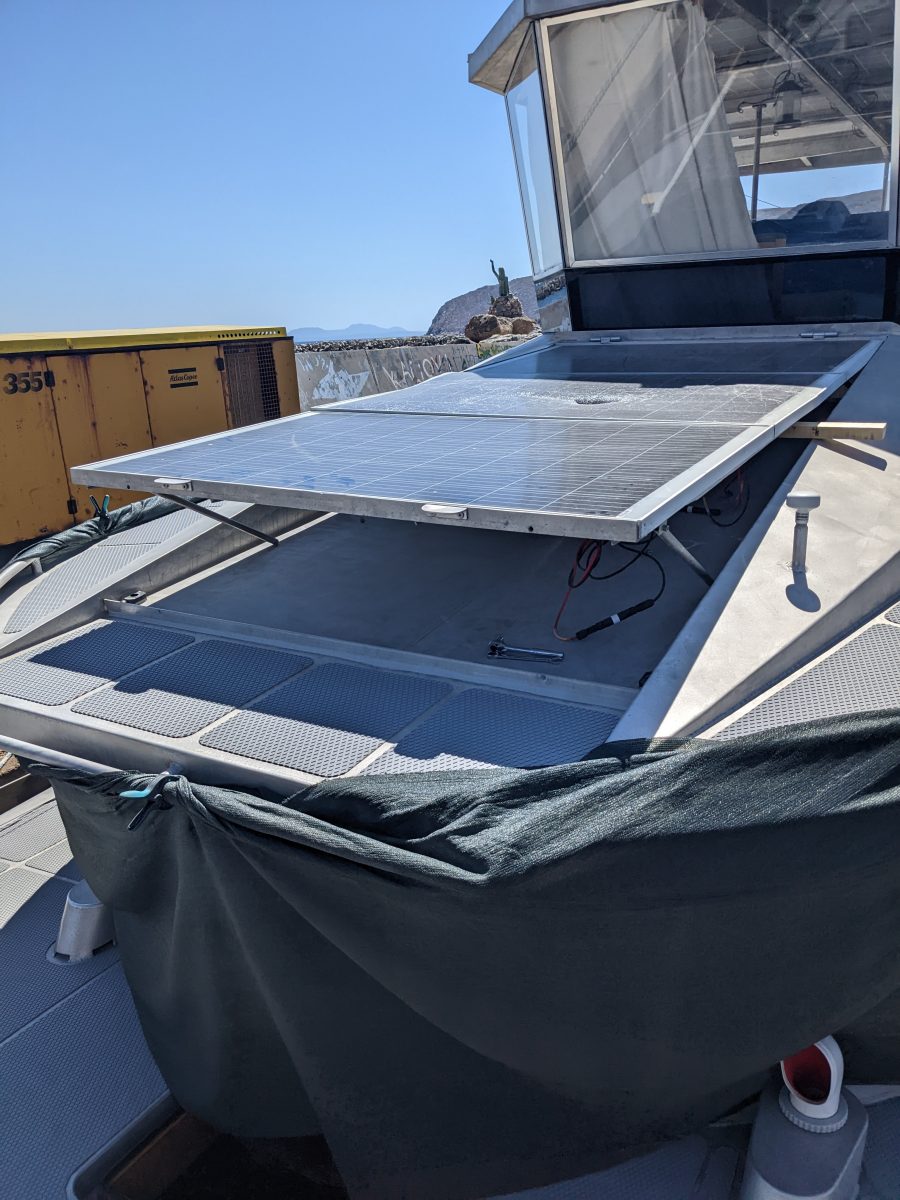 As you may recall, this set of three 300W solar panels are mounted in an aluminium frame that is hinged on the aft end so that it can be lifted up like this when we are at anchor or on a dock.  This has double benefits of getting the solar panels horizontal which is often a better sun angle and then creates this huge wind funnel that takes the breezes over the bow back to a mist eliminating grill set in the far back wall. 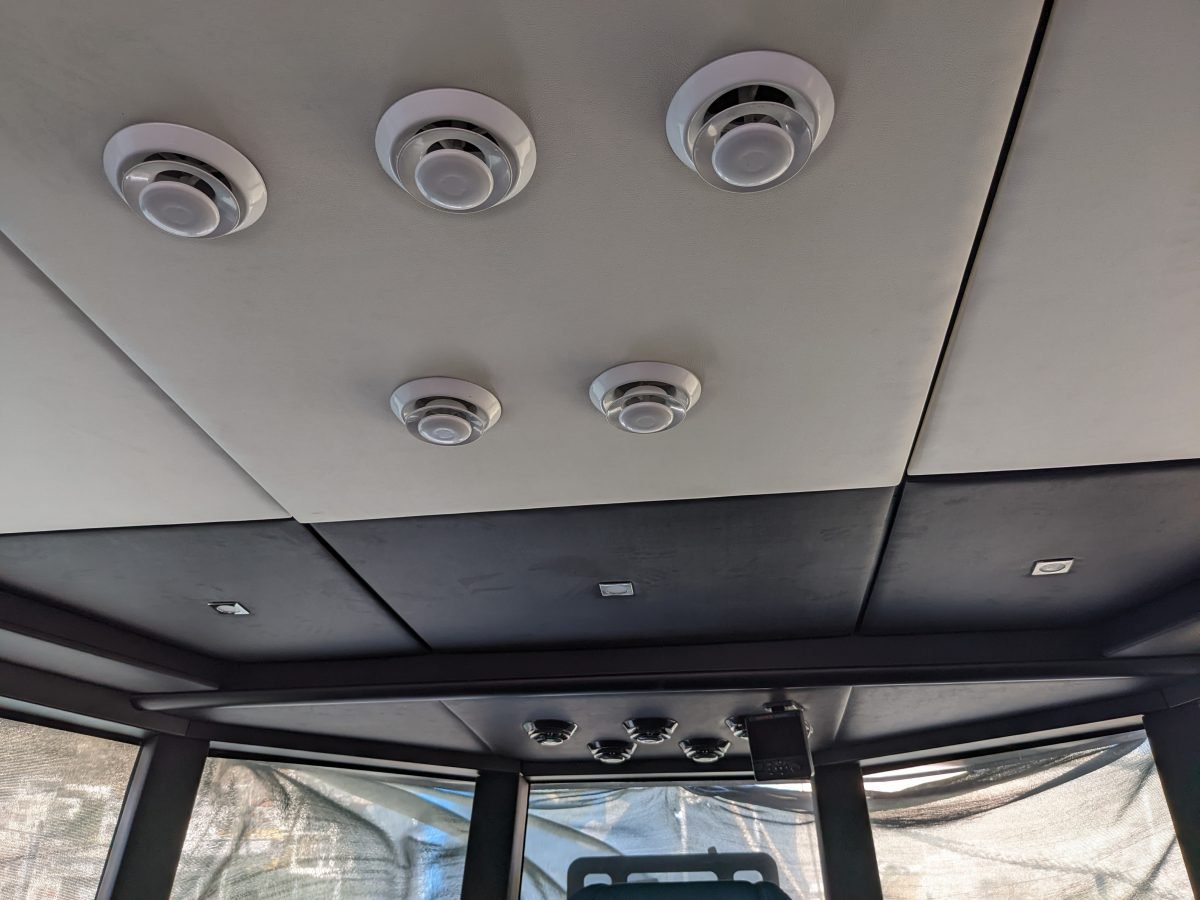 Which then flows into the middle of the SuperSalon through the White air diffusers in the ceiling.  The Black ones further forward get their air from another vent tucked under the overhang of the roof above the front window.  Helps keep good airflows. 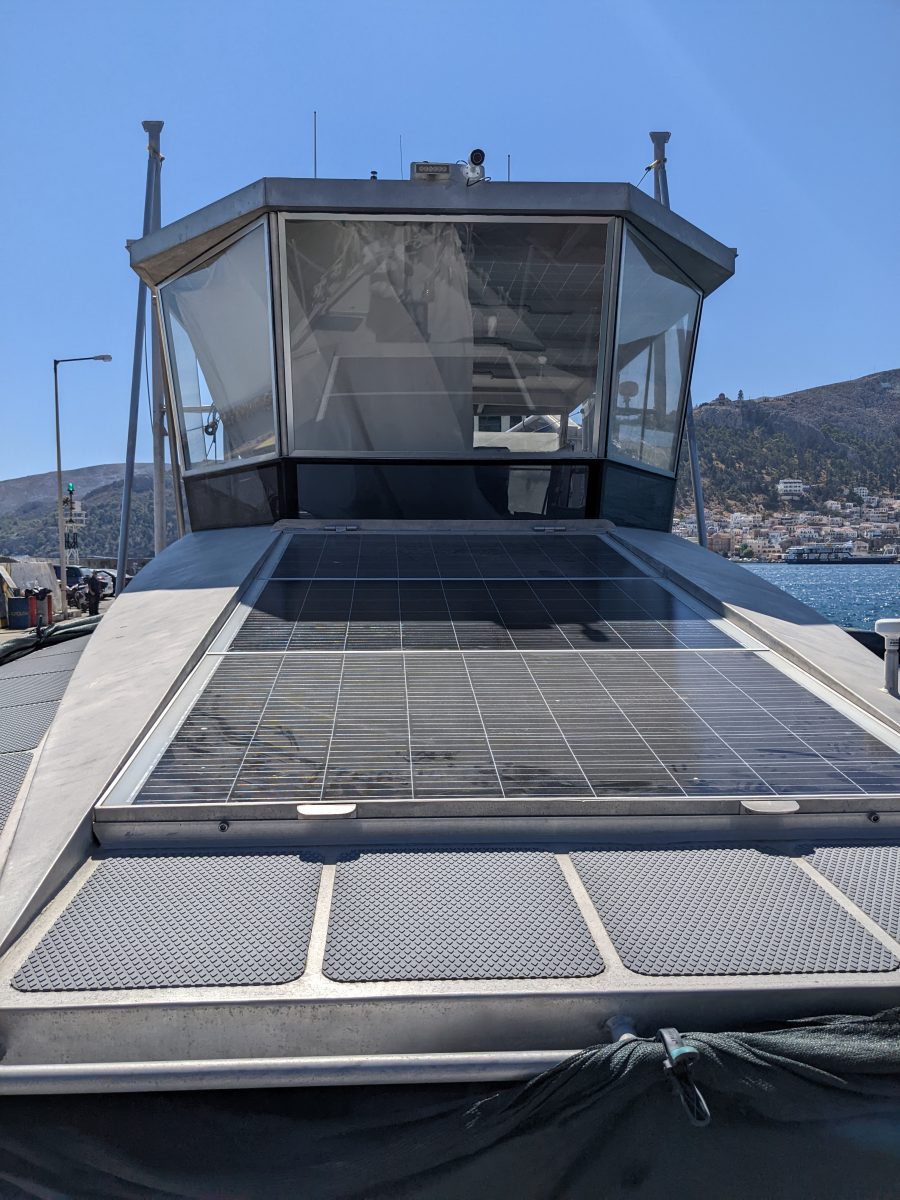 When we are underway, the panels simply fold down like this so they are flush with the angled roof section of the SuperSalon.

I’ll bet you can’t guess which position they were in on Monday night/Tuesday morning??!!

Took me awhile to put it all together as I tried to figure out what had punched that gaping hole in the middle panel? 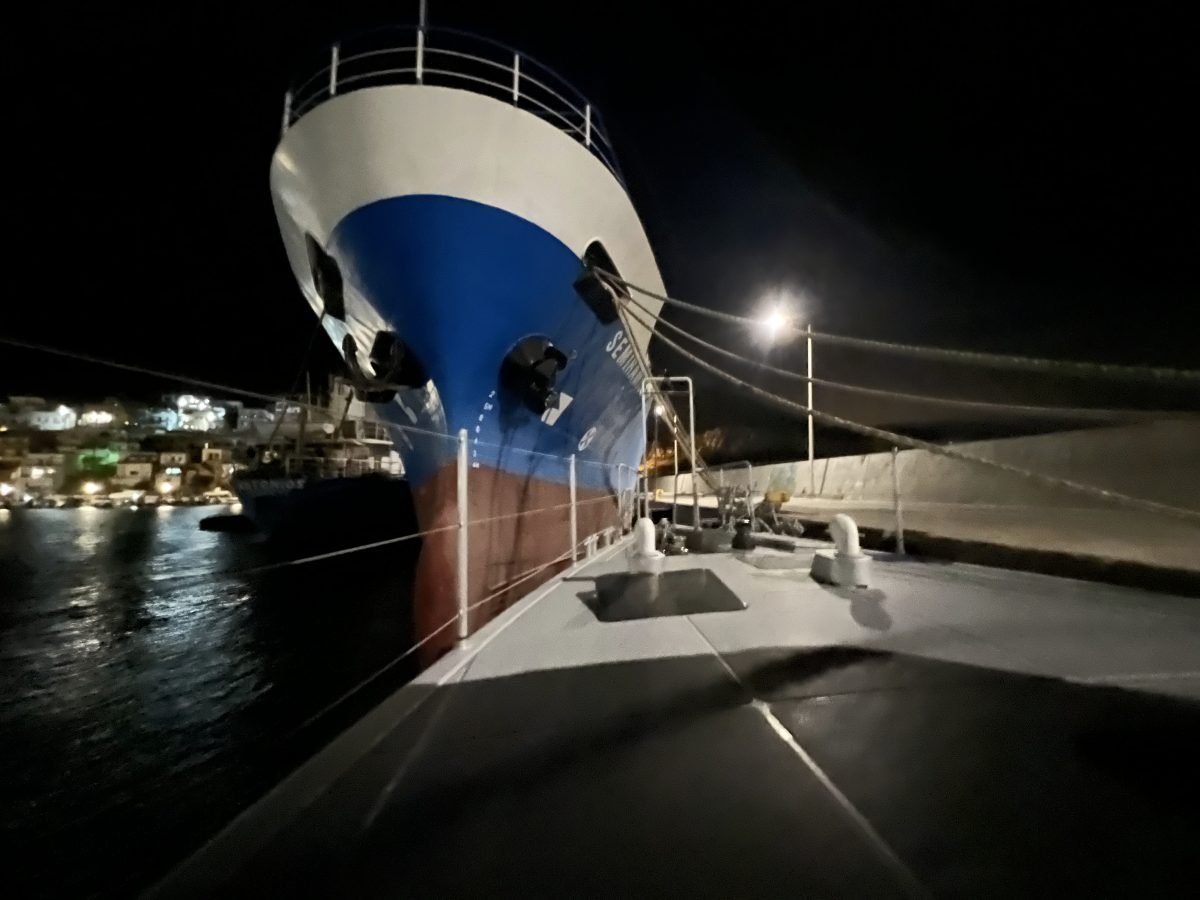 At first I thought perhaps the strong winds had carried some hard heavy something crashing down onto the panel and there was a good culprit staring right at me from the bow of the oil tanker that overlaps our bow on the dock we are tied up to. 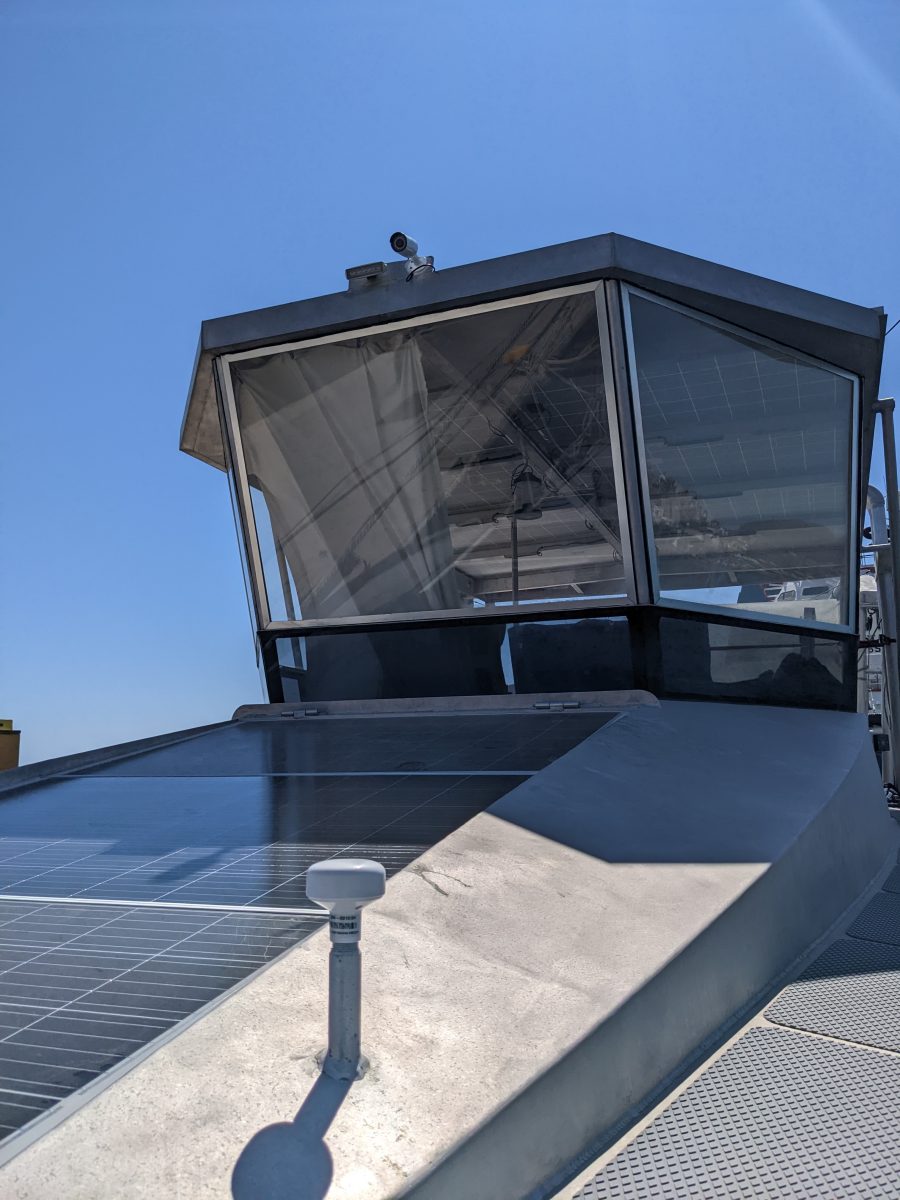 I’d estimate it takes me about 20Kg/44lbs to lift the front of this panel up when I want to put it in the UP position so you would think that it would be pretty stable.  But you’d be wrong!

These panels have been in the horizontal UP position for the past two months with nary a problem but what had happened was that Meltemi winds had shifted on Monday night so that they were coming more directly over the bow rather than over the Port/Left side they usually blow over, and one of those big gusts had lifted up the whole rack, slammed it against the front of the roof over the SkyBridge and the video camera had punched itself right through the solar panel. 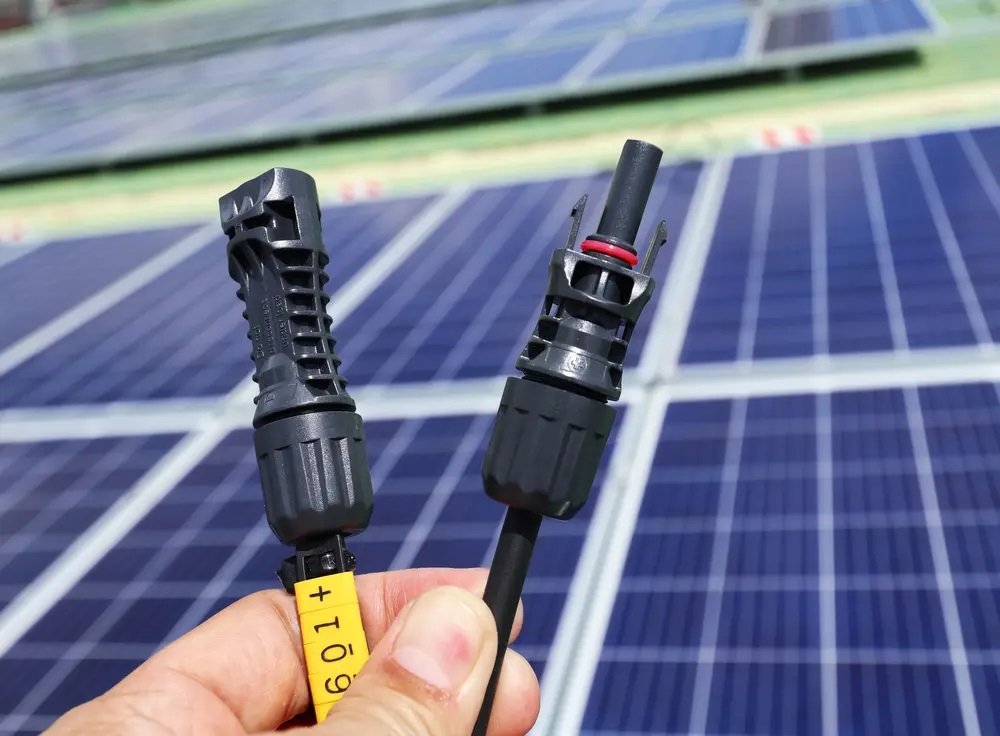 Fortunately I have several new solar panels onboard for spares and so it only took me a few hours to unbolt the broken PV panel and bolt in a new one.  These panels use these handy MC4 connectors with a built in fuse so all I had to do was unsnap the old ones and click the new ones in place and we were back to full solar capacity with all 14 panels now working. 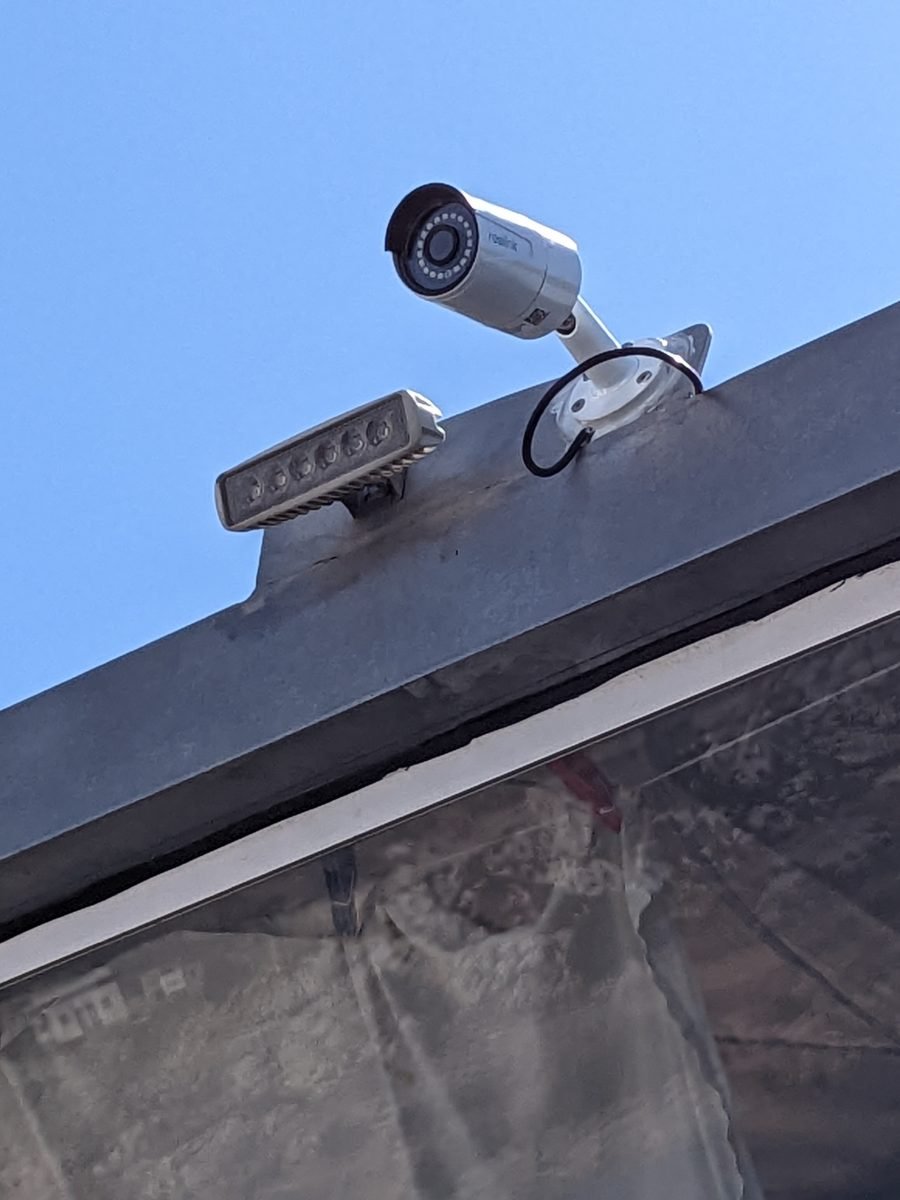 Christine had a new and improved video cam that she had put on my ToDo list to replace the original one.  How convenient!

Easy enough to unbolt what was left of the base of the old camera and bolt the new one in place.   This new camera uses PoE or Power over Ethernet so only requires a single Ethernet RJ45 (waterproof) connector and it was good to test out. 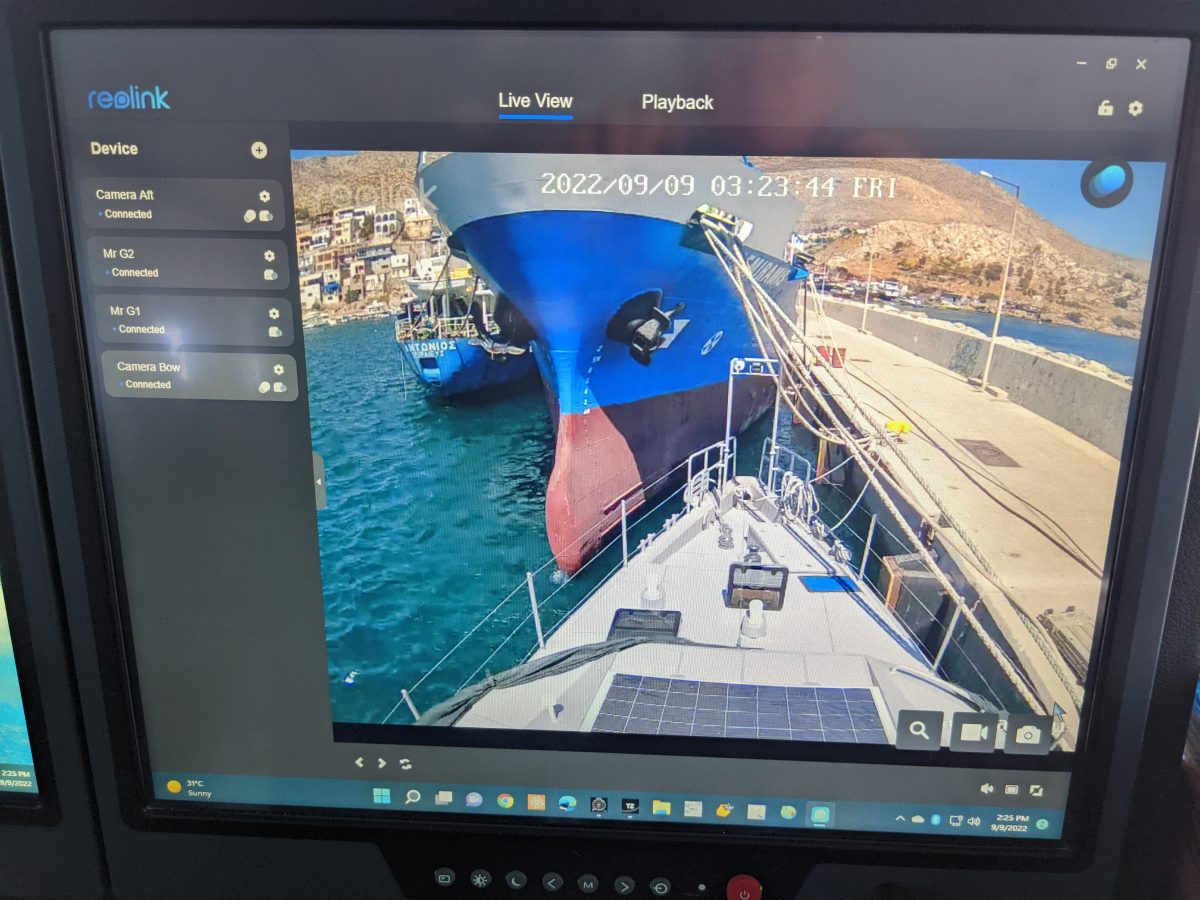 Fired up the main boat computer in the SuperSalon and a few clicks later had the new camera streaking this video over the bow. 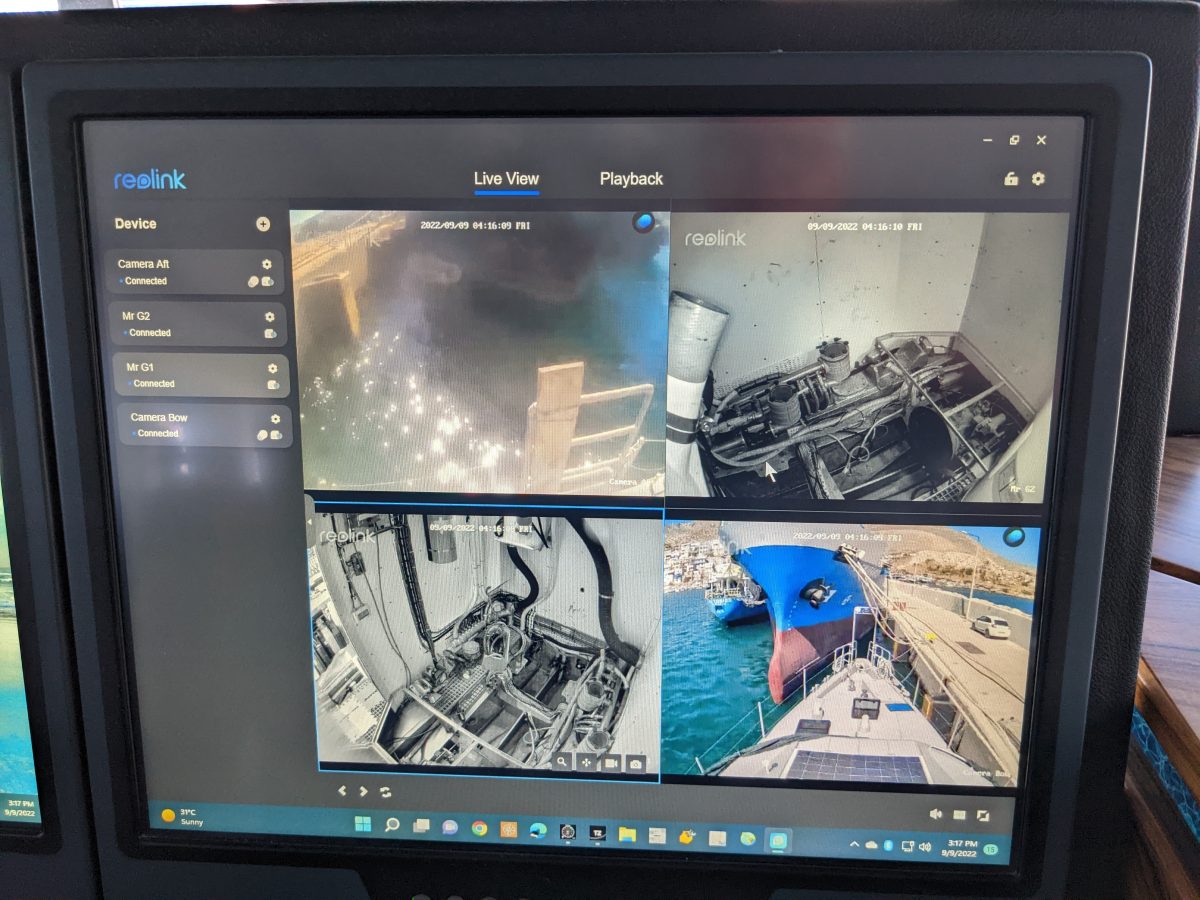 Right now we have four cameras onboard with a rear facing one off the transom which is great for docking and then two in the currently very empty engine room to keep an eye on Mr. Gee once he gets back in there.

Lots of other smaller jobs and time online sorting things out for the new engine and boat bits but nothing too entertaining to show so I’ll close out for this post and will be back when I have enough interesting content to share with you in the next week or two. 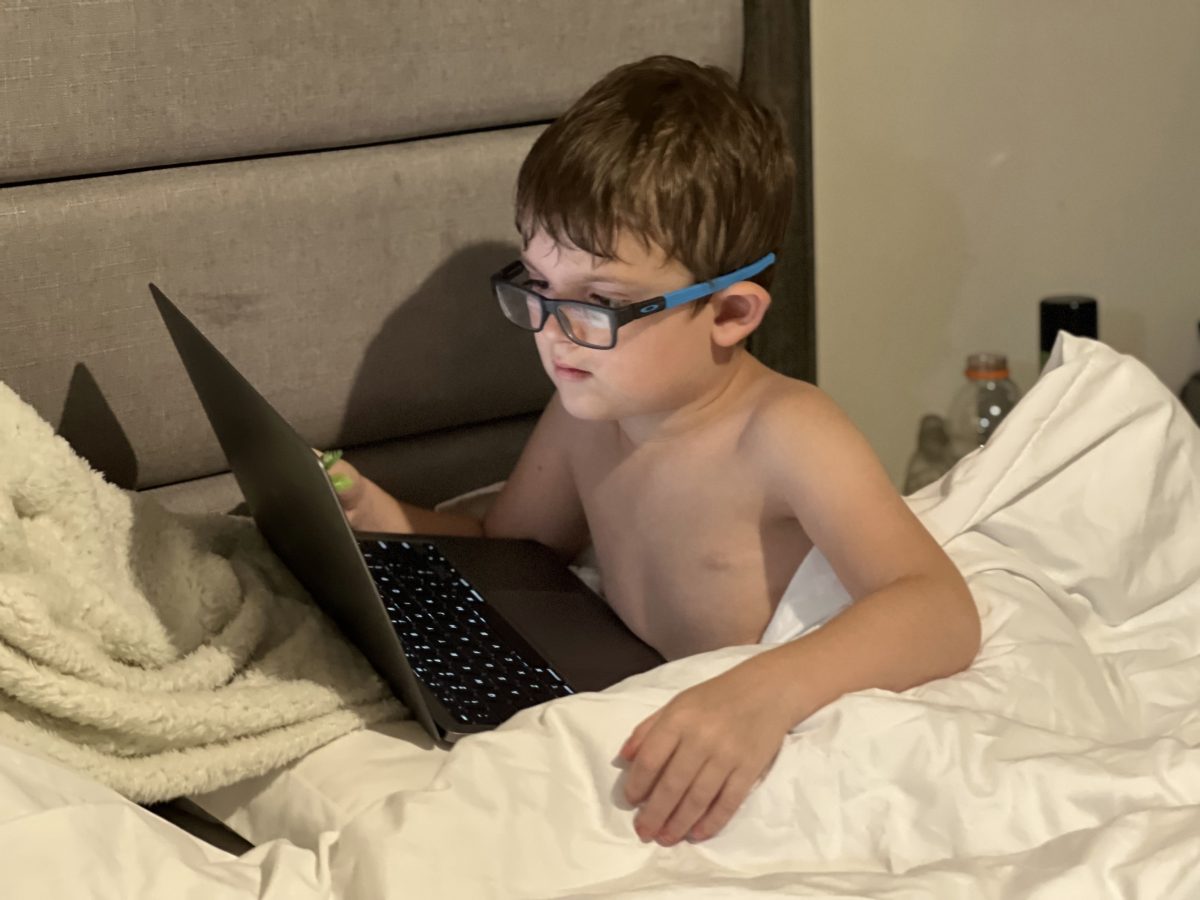 I will leave you with Gramma’s bed buddy and fellow geek.

Thanks for your patience in dealing with this delayed and different looking update. Hopefully we will get the technical posting problems sorted out and be back to the usual format in the next week or two.

Please put any questions and comments in the “Join the Discussion” box below.