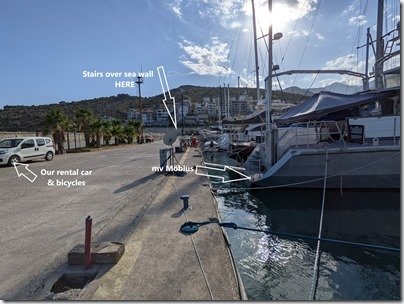 The cooling trend continues with the weather here in Finike Turkey as the daytime highs drop down below 34C/93F most days this week and the forecast calls for our first sub 30C/86F high next week.

We are very fortunate in that we have a huge swimming pool here at Finike Marina, aka the Mediterranean Ocean, that is just a short walk down along the sea wall from where Möbius is docked. 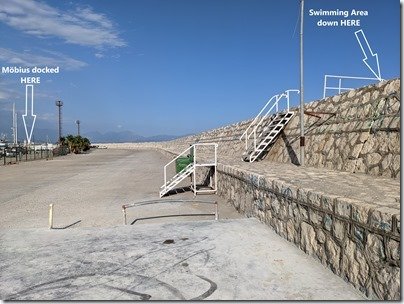 We are able to have our nightly swims thanks to a set of stairs up over the sea wall that the Finike municipality put in several years ago.

You can see more of our nightly swim spot in the fun video HERE which Christine put up last week of her first solo piloting of our Mavic Air 2 drone. 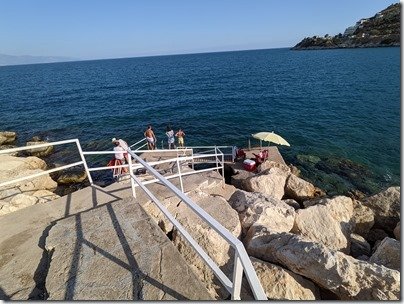 So every evening around 7pm or so, we exchange our work clothes for our bathing suits and make the short walk down to this set of stairs up over the sea wall every evening after we stop working and swim off this landing for 15 minutes or so. 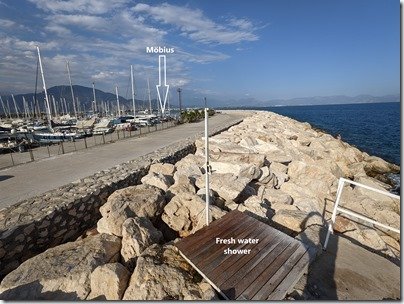 We even a fresh water shower to rinse off all the salt on our way back to the boat.

Oh!  AND we also have the AirCon working very well now for those days that are still a wee bit too warm, so we are very comfy and grateful to be here.I am running late here getting this blog written on Sunday afternoons as usual and it has been another very busy work week getting more and more of the jobs done on Möbius but I’d like to share some details on a set of related topics which I get asked quite about very often and which seems to be surrounded by SO much confusion and misinformation; Power, Load and fuel consumption.

What moves a boat?

Seems like such a simple question, and the answer really is equally as simple and yet, in talking with other boat owners over the years, both in person and online in various forums such as Trawler Forum, I’m often surprised at some of the things I hear otherwise very savvy and smart people say when it comes to things like Horse Power, fuel consumption, propellers and other aspects of the propulsion of their or other people’s boats.  I was reminded of this again just this week by a post that Steve D’Antonio sent out in his August 2021 Newsletter “Full Throttle vs. Full Load”.  If you are not already subscribed to Steve’s newsletter I recommend it highly as a super valuable source of very thoughtful advise and info on all things boating.

In this most recent article, Steve goes over the often confused differences between full throttle and full load and more importantly he links to a much longer and well written article of his called “Wide Open Throttle” from  back in 2010 for Professional Boat magazine which I also recommend eXtremely highly if you are not already subscribed (free) as ProBoat is one of my best learning resources and I have their entire library of magazines.

Both of these articles are must reads in my opinion if you would like to understand the relationship of HP, fuel burn and power going to your propeller.  However THE best explanation of this relatively simple set of relationships is written by Tony Athens at Seaboard Marine in his very well titled article “Propellers Move Boats, Engines Just Turn Them”.  All three of these articles are very much worth your time and I will circle back around from what they address  in a future article here to talk more about why we have a Controllable Pitch Propeller or CPP on Möbius.   It will also address why we chose to have a Gardner 6LXB turn that CPP

Once you have read these over I think that you will clearly understand what so many don’t seem to.  The major points are as follows:

If this does not make sense to you, or you have always been told otherwise, please do give these articles above a read and then let me know in your comments if you still think this does not make sense or is not correct.  Once we all have the same understanding of these basic components of boat propulsion and how they are related to each other, I will address one of the most asked questions I receive; why did you chose to use a CPP on your boat?

I know these more technical topics are not everyone’s cup of tea, but for those it is, I hope you enjoy the articles above and I look forward to any additional discussion or questions you have.