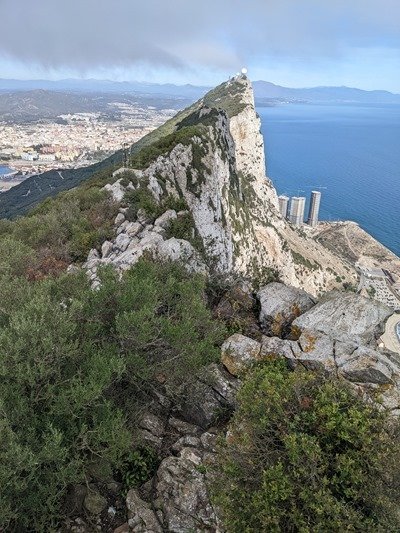 Not too much to report from my side of the past two weeks as we continue to wait for a weather window to open up and let us make the passage south along the West cost of Morocco to one of the Canary Islands from where we will start to cross the Atlantic.  Lots of daily boat projects configuring some of our Maretron monitoring system, dialing in Furuno Radar, adding insulation to fridge/freezers, etc. but nothing too photogenic to show.

However, Captain Christine has been using our extended time in this fascinating city of Tangier to get out and explore so I will mostly share some of her great photos.

Picking up where I left off in the last Mobius Update we were exploring “The Rock” aka Gibraltar as the great sunny weather we’ve been having for months for both shoreside explorations and passages continued. 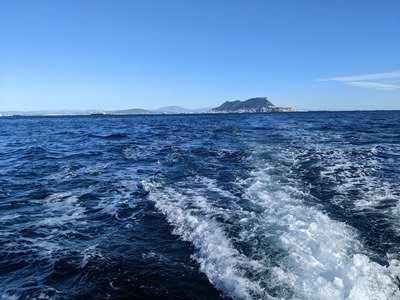 Taking advantage of the good weather, we waved goodbye to Gibraltar as we put it in our wake on Monday the 28th and made our way back across the Straits of Gibraltar heading SW over to Africa and officially out of the Mediterranean and into the Atlantic.

As this satellite shot from space shows the Strait is VERY narrow and the only place where all the water of the Mediterranean flows in. 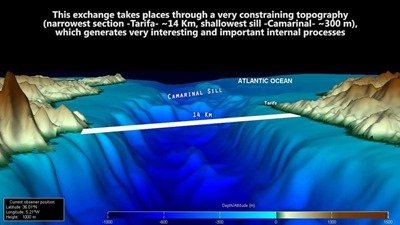 Not surprisingly then this tremendous volume of water flowing for so many years has also made this Strait VERY deep, which makes for some pretty significant and wild currents. 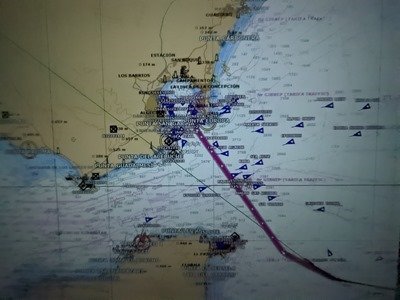 Oh, and of course this narrow passage is also the only passage for all ships going In/Out of the western end of the Med so it its a bit busy as well. Each blue triangle on our chart screen is a commercial ship. 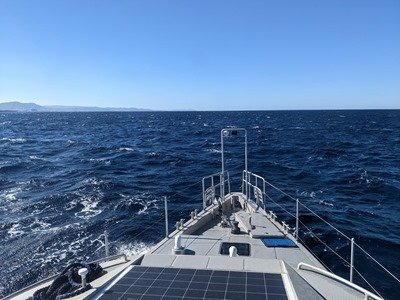 It was another sunny day with winds below 20 knots most of the passage and you can see the seas starting to churn a bit as we headed West to get over to good spot to turn South and get across the shipping lanes as quickly as possible. 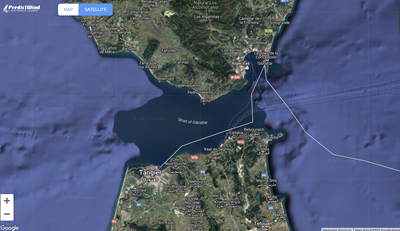 You can see this pretty clearly in this screen shot of our actual track coming out of Gibraltar and heading over to Tangier.  With such varied currents and sea conditions our speeds ranged from as slow as 4kts up to 13 and Möbius handled it all eXtremely well and we made the 37nm passage in 5 hours for an average speed of 7.4kts. 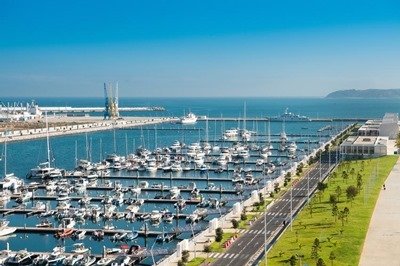 We entered this lovely Tanja Marina Bay in Tangier where we went through a very smooth checking in procedure before moving over to our spot on N dock which is in the top right end of the photo here.  The marina can hold up to 1400 boats and is relatively new having opened in 2018. 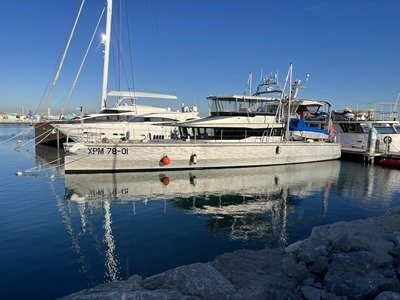 We had heard from other cruisers that the marina was very full due to the poor weather off the coast preventing all the boats trying to get down to the Canary Islands but we were treated to this excellent spot with an empty slot on the Starboard/Right side and nothing on the other.  A good spot for a few days, or so we thought at the time.

Mother Nature apparently had different plans in mind for us and our weather maps since just after we arrived have looked like this one, which is from today, Dec. 11th.  We’re looking for Blues 0-10 kts and Greens 10-20 kts but as you can see it is mostly all Yellows and Reds which are winds up to 50+ kts.  These are being caused by a series of Low pressure spots that keep marching East across the Atlantic one after another for the past few weeks with no end in sight yet.

This legend will give you the details of wind speeds and colours if you’re interested.Fortunately we live on The No Plan Plan and so the only date we have for making the Trans Atlantic crossing over to the Caribbean is whenever Mother Nature gifts us with a nice Blue slot across.  And so we wait until we see something more like …..

…. this!  I’ve marked up this forecast weather map for next Saturday 17th December (click to enlarge) to help visualize the difference and what we’re waiting for.  The challenge is that the passage down to the Canary Islands will take about 3 days and then the crossing to the Caribbean will take about 12-16 days so we are waiting until the forecast calls for the typical “Blue slot” or Green with winds behind us, across the Atlantic like the one you can see here, and one that will hold for 2-3 weeks. 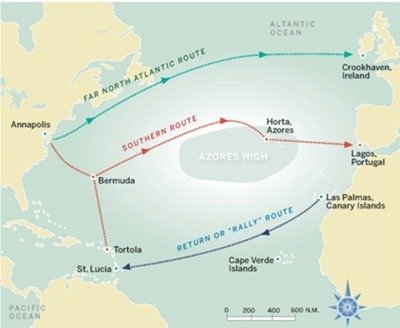 Historically those are the conditions here from about the end of November through February and hence the time when sailors come to the Canary Islands to cross the Atlantic.  But as we are all experiencing no matter where we are, weather patterns are changing and often not following patterns from previous years and so this year we are getting this parade of Lows coming across and so the marina here in Tangier is chock full of boats all waiting like us for the weather window to open up to let us get down to the Canaries or Cape Verde to the south, and then make the Atlantic crossing with good winds and seas.  Being a power boat we have the significant advantage of being able to go in anything from Blue to Green whereas sailboats want Green winds of up to 20 knots from the side to behind so we will likely be able to leave before many of the other boats here.  But not for at least another week or two by the looks of the current forecasts. 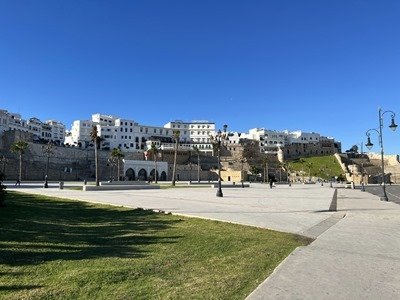 On the flip side, the local weather here in Tangier all last week was beautiful and this is an eXtremely fascinating city with a very long and diverse history so a pretty good spot to be for a few weeks or however long it takes. 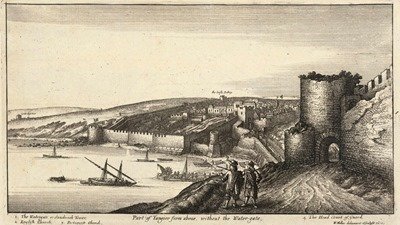 Being such a strategic location Tangier has been very highly fortified since about the tenth century BC, and all the ensuing occupations since by Romans, Berbers, Greece, England, France, Spain, Portugal, and more. 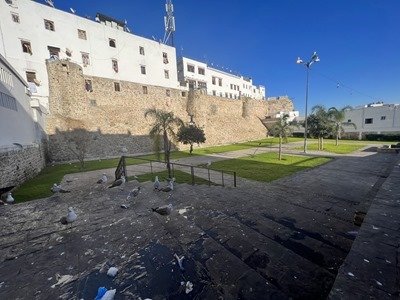 Today fortifications like the one in the photo above have been restored and updated such as we saw here. 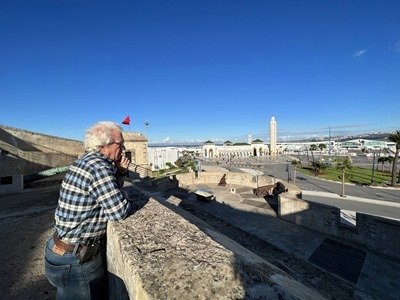 We spent an hour or so wandering through this sprawling fort with views like this which make it easy to see just how advantageous this location was for defending the Straits. 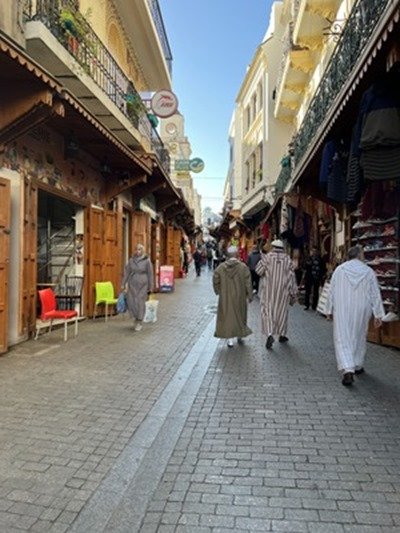 As we moved further in the historic preservation areas soon transformed into scenes like this with shops of every description on street level and apartments above. 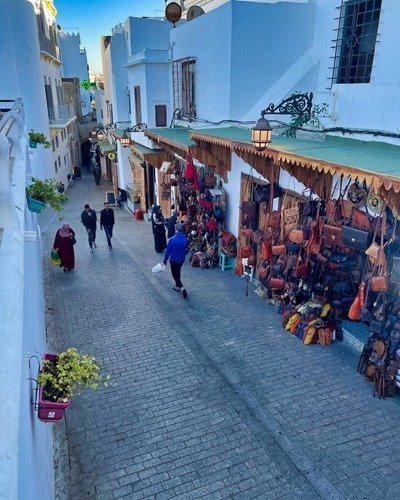 Diverse does not begin to capture the tremendous variety of everything from architecture and colours to ….. 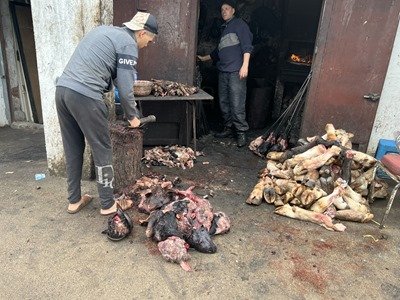 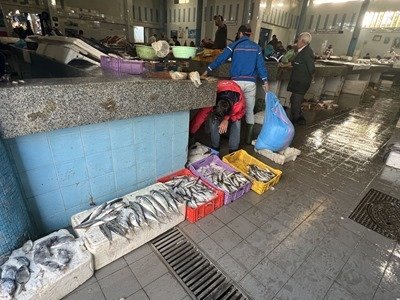 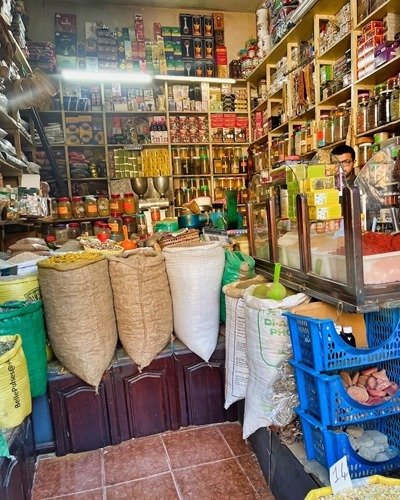 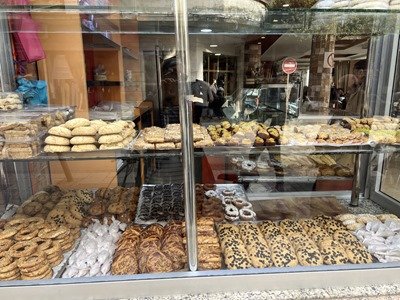 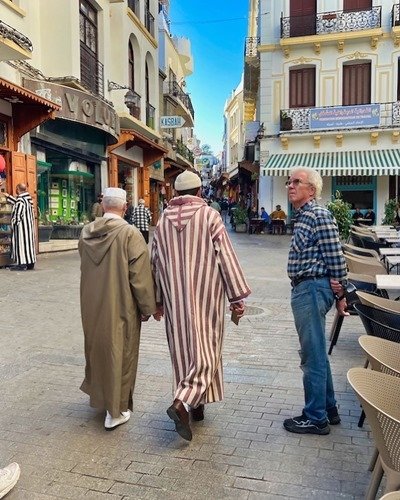 I enjoy just taking it all in and observing details of the buildings, the people and the businesses. 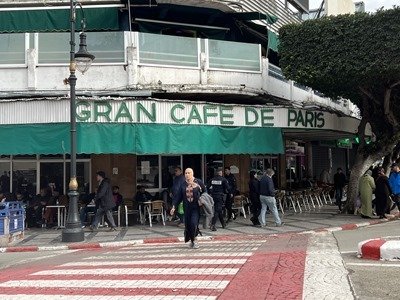 Christine is the researcher and she found out that this was where many scenes in the Jason Bourne Ultimatum movie were shot including the Gran Café de Paris scene. 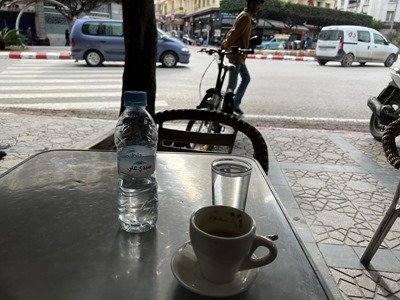 Where she walked there last week for her afternoon coffee. 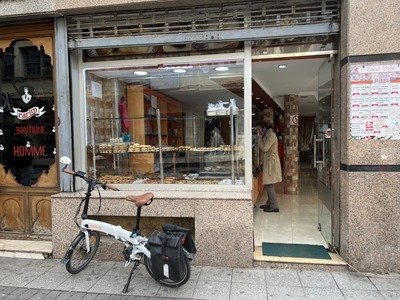 and to this patisserie with her “Freedom machine” parked out front.Meanwhile, back at Tanga Marina Bay …….. 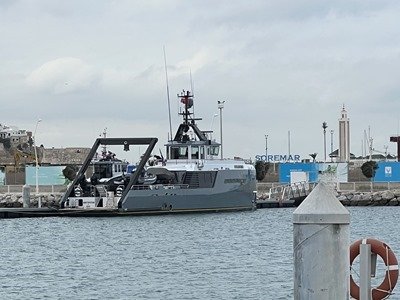 We aren’t the only eXpedition type of boat here when this little fellow showed up about a week ago.  Christine met up with the crew on one of her walks and they were very familiar with our boat and some of the similar ones built in by Circa Marine in New Zealand.  I think their “tender” on the back is bigger than Möbius! 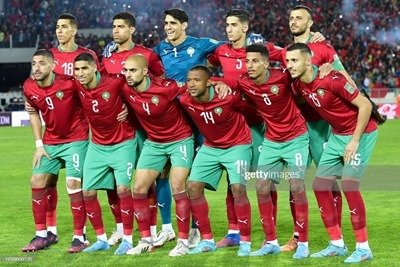 The weather may have turned cold and wet this past week but what was really hot was all the celebrations of the Moroccan national football team competing in the FIFA 2022 World Cup in Qatar.  We are docked beside a long row of cafés and restaurants and the Moroccan fans have been bringing down the house every night their team plays. 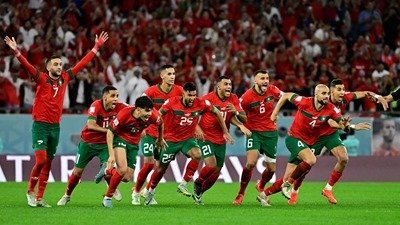 This is closer to what it looks like inside these spots.  We aren’t much into sports but the story of the Moroccan team is quite incredible being the first team ever from Africa to compete in the World Cup and as of last night’s win over Portugal, who were favored to win the whole tournament apparently, the Moroccan fans have been partying hard and loud ever since.  An amazing story and they play top rated France next so I’m sure that the feverish support will reach all new highs on Wednesday.  Great timing for us to be in this mix and Go Morocco GO!

So there’s your update from the Good Ship Möbius and I will update again once the weather window arrives and you can join us in the trip South to the Canary Islands.  Till then, thanks for all your comments and questions, please keep them coming and we’ll do our best to keep you entertained and informed.