The Möbius Rollercoaster Rolls On 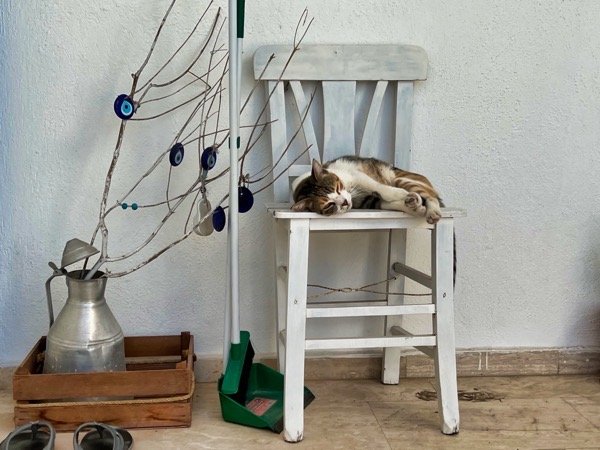 For this week’s Situation Report, we’ll start off outside the door to our Airbnb, as I, Christine, tip-toed out on Monday morning past the Türkitty security system to catch a taxi from the village of Bitez where we were on day 17 of our forced exile from Greece and the EU. 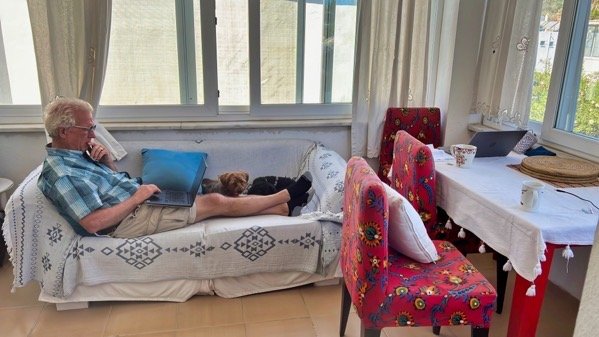 I left behind my family who would be spending their forced internment doing hard labor, as usual.

I was on a mission to free them, no matter the cost.

That cost started out to be rather substantial as the taxi driver asked me in his broken English (better than my Turkish) which ferry I was taking, Castle or Cruiseport. I checked the ticket on my phone and it didn’t say anything about where to catch it. We hadn’t arrived at the castle several weeks ago, so I told him the Cruiseport. Turned out I was wrong, so I had to forego that 18 Euros and buy a new 26 Euro ticket. It wasn’t a good start to the day, and I still hadn’t found any coffee.

The high speed catamaran makes the trip across to the island of Kos in less than an hour, and I made it through immigration with no problem. I still had about 17 days left of 90 allowed in the EU, but I had been in and out many times, and it was clear that the young man who leafed through my passport did not really check all the stamps and do the math to calculate days. He just stamped it, and I was on my way. However, there were two of them working the window, and I had no trouble recognizing the woman sitting next to him. She had been on the job the day we left Greece, and she was a potential problem for us. 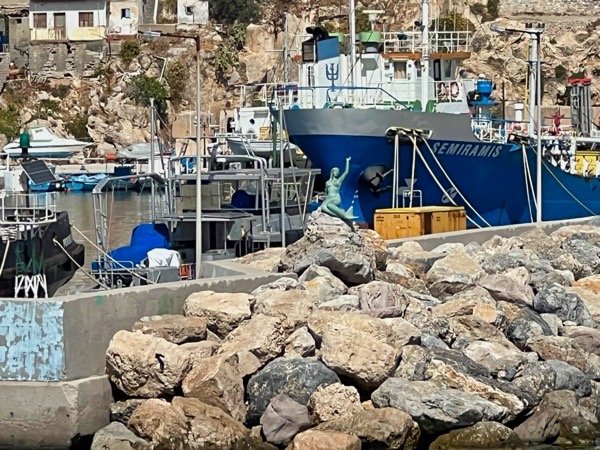 You see the day the mermaid waved us off as we left Möbius behind wedged between the tug and the tanker on the island of Kalymnos, Wayne got stopped by that immigration officer as we were exiting EU immigration on Kos. As she had flipped through Wayne’s passport, she came across a stamp from the TRNC, or Turkish Republic of Northern Cyprus. She refused to stamp his passport as exiting the EU, but rather stamped a white piece of paper and slipped it into his passport.

Way back in 2017, before we had even started building Möbius, we were on our friends’ Lagoon 50 catamaran in Cyprus, and Wayne visited Antalya to talk to builders and to move our vehicle from Rhodes to Antalya. It is not possible to fly from Türkiye directly to Southern Cyprus, so he just flew from Antalya to the north, then walked across the border and took a bus back to Limassol. Later, we learned that though the exact law is in dispute, many Greeks will not let you into their country if you have such a stamp in your passport.

That morning as I had purchased my (second) ferry ticket, I saw a big sign over the window that said, “Persons with a passport stamp from the TRNC will not be allowed to enter Greece when the ferry arrives.”

We had done so well clearing in at Rhodes, and I thought this whole thing was finished. The whole point of our coming to Türkiye was to prove to the Greek immigration authorities on Kos that we had done as they asked and left the country. But Wayne didn’t have the passport stamp to prove it. If we showed them the white piece of paper, the visa issuing authorities would know they had missed seeing that stamp in his passport, and they might never let him back in.

One step at a time. There was no printer in the Airbnb, so as soon as I landed in Kos, I pushed that problem to the back of my mind, got myself a coffee, and then I went in search of a copy shop that could print out the papers that showed that Mr. Gee 2.0 had actually arrived on the island of Kalymnos. The most difficult part of getting around in Greece is that you can’t even read the alphabet, and often the names of the places on Google maps are in the Greek alphabet. But after two or three false leads, I finally found a nice lady who printed out the three pages for 1 Euro. Bargain!

I made it to the police station where the immigration office is located by 10:15, only to be told to come back at 12:30. Okay, breakfast. There was a restaurant right next door. 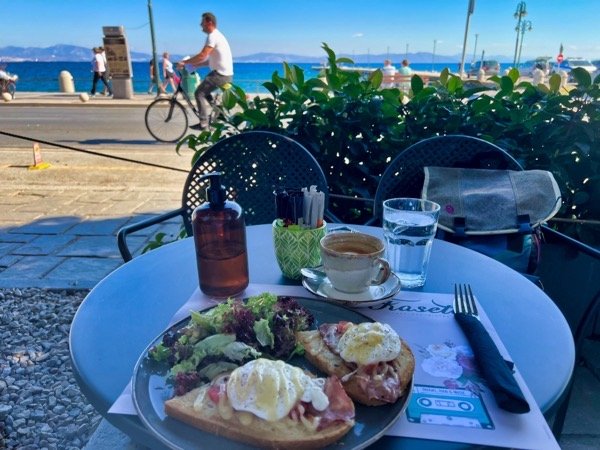 I couldn’t resist sending a What’sApp message back to the prisoners with this photo and the caption, “Eggs Benny, Baby!” And the cappuccino wasn’t too bad either. (The land visible in the distance in the photo is the Bodrum peninsula in Türkiye)

When I returned to the office, the immigration officials looked over the documents I had brought. I explained that the engine was there at last, and we were simply asking for two weeks to get it installed and then we would leave the EU. They went upstairs to talk to the chief. The nice lady came down after a 30 minute wait and said my husband should come the next day with his passport and she gave me the list of documents needed. She also gave me a paper and told me to take it to the Post Office and pay the 30 Euros for the visa. I took care of all that, even went back to the copy shop and printed out copies of all the papers needed and took her the entire file. She approved it and told me to have him there by 10:00 the next morning.

I had planned to go over to Kalymnos and check on the boat, but I called Wayne and told him the good news first. Then I said, look, if we’re both going to be going to the boat tomorrow, I might as well go back to you tonight. It was difficult to even wrap our heads around the idea that after the weeks of making Plans A, B, C, and D, we were both going home the next day.

So I made my way back to wait for the 5:30 ferry, and took a taxi back to Bitez. We enjoyed a “clean out the fridge” dinner and set our alarms for another early morning.

I didn’t sleep well as Wayne’s passport stamp was not the only fly in the ointment. During our stay in Türkiye, I had done my homework on importing the dogs back into the EU. They have had EU pet passports for several years, and they needed to update their rabies shots and get new titer tests done. We did all that. They would also need to have proof of anti-parasite drugs administered and a health certificate from a vet both no longer than 10 days before entry. We had done all that when we entered Rhodes, and I had considered taking them to the vet while we were sitting around in Bitez, but we weren’t sure of dates or if we would even be allowed in before the end of the year. We discussed it that evening and we decided to just go for it with the old health certificate. If we got to Kos and they wouldn’t let the animals in, I would go back with them and take them to a vet and do what I could to get them legal while Wayne went on to the boat. 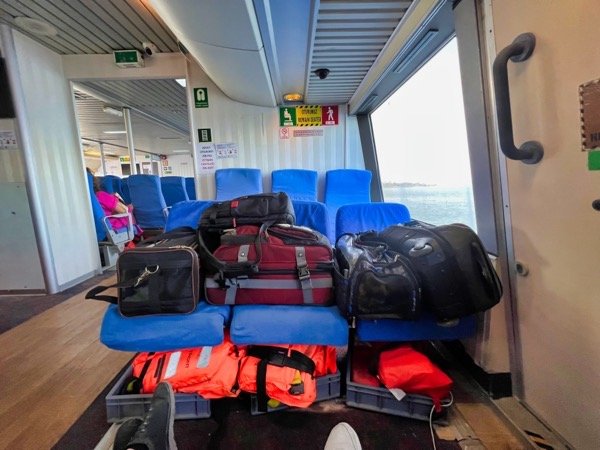 The next morning we were off with suitcases, backpacks, dogs in travel bags, and after yet another taxi ride to the ferry dock, we were on our way. I asked Wayne, “How many times is it now that we have said Good-bye to Türkiye? I don’t think I”ll say anything. I don’t want to jinx it.”

The plan was that when we got to the immigration window, if the man was available, Wayne would go first. If the woman became available, I would go. My heart was beating overtime, but we breezed through that and went around the corner to the Customs lady. She motioned for us to put the bags up on the table. Wayne set down the bag with Ruby in it and when the woman started to open it, Ruby let out a loud whine. The woman jumped back. We all laughed and explained that we had two dogs. She peered at the cases and asked if we had their pet passports. I handed them to her. Then she smiled and told us about her dog and asked our dog’s names. We lucked out. She was a dog lover and she waved us through.

Halfway around the marina basin en route to the police station, Wayne parked me and all the luggage at a cafe while he went on alone to immigration. Suffice it to say that our luck held and they somehow didn’t notice that he had no stamp out of the EU. Some four plus hours later after Wayne getting fingerprinted and lots of waiting, Wayne got his visa extension for two weeks. We took another taxi to Mastichari where we could catch the ferry from Kos to Kalymnos. 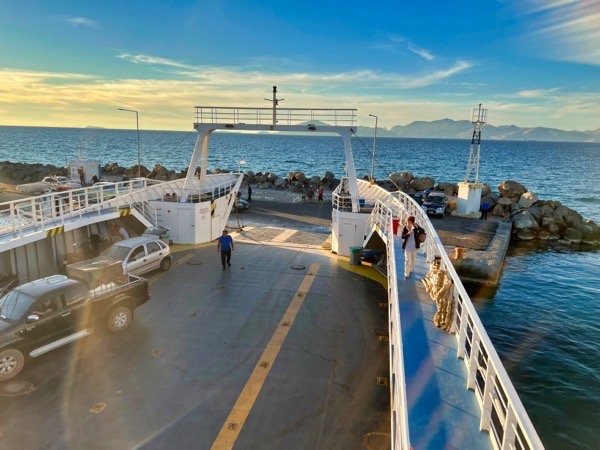 It was so great seeing that island on the horizon where our home had been docked all alone.

It was dusk by the time we got home to the boat. The dogs were almost as happy as we were. The boat was fine, no dead rodents in the traps we had left (that was another story), no signs that anyone had been aboard other than the local cat population that likes to sleep on the Skybridge, and all was well. We had left the boat unplugged, and we had been able to monitor the batteries and solar situation with the Victron VRM. Without us aboard, there wasn’t too much draw, but we did leave one fridge and one freezer working and all the inverters. The batteries were down a bit, but as you know if you’ve been reading this blog, we were happy that the firefly batteries did as well as they did.

Wayne wasted no time. We arrived Tuesday evening and Wednesday afternoon, this guy came barreling down the quay. 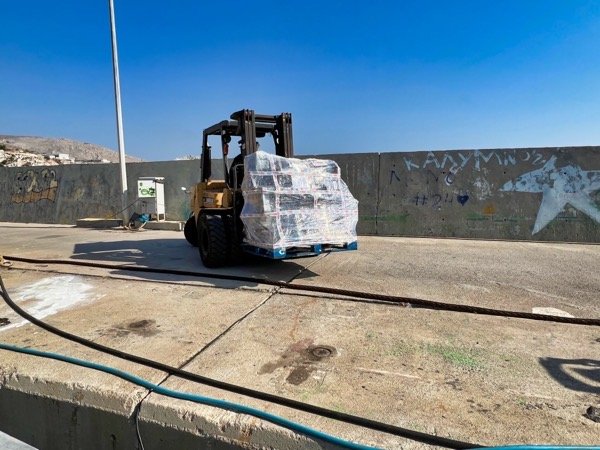 In case you haven’t guessed by now, I am writing this Sunday blog because he has had his hands full the last several days. 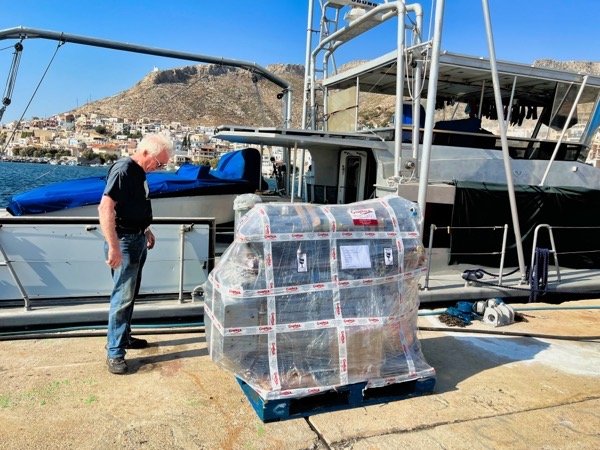 But that will be his story to tell. We just wanted to let you all know that we are back aboard Möbius and Mr. Gee 2.0 is getting lots of tender loving care. 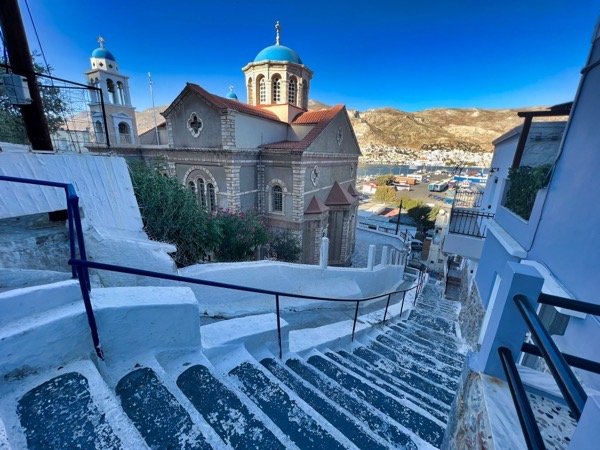 And Kalymnos has worked her magic once more.