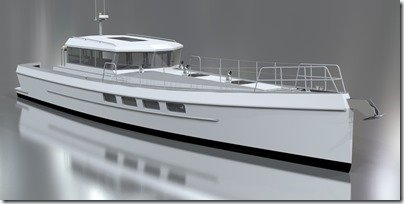 Our lives aboard Möbius have settled into the same pattern of working our way through the list of jobs needing to be finished before Möbius is fully sea worth and ready for us to get back to crossing oceans and eXploring the salt water world we both love so much.  This work is far from “glamorous” or eXciting, just neccessary and a pattern we are accustomed to from our decades being full time live aboards and stewards of many boats before.

What IS eXtremely eXciting is the arrival of more and more members of our family of XPM style boats from the desk of our beloved Naval Architect and designer, Dennis Harjamaa who runs Artnautica Yacht Design in Auckland NZ.  So let me provide a bit of background to help put this all in context.

Finding our Goldilocks NA and Designer for XPM78-01 Möbius

Back in 2016 when Christine and I got serious about switching from sail to power and designing and building our own new “Goldilocks” just right, just for us passage maker, we spent a year searching the world for our equally Goldilocks NA.  There are a LOT of Naval Architects and boat design firms but what made our search so challenging was that we did not want to be just clients the designer worked FOR and end up with a boat design that was based on what the designer thought was best.  Instead we wanted a designer who would work WITH us in a highly collaborative way to transform the very specific visions and specifications which we knew well from all our nautical smiles at sea.  It took us almost a year and a lot of both nautical and air miles but we finally found and met up with Dennis when we had our previous boat in New Zealand and we knew right away that we had finally found our Goldilocks guy.

Winding the clock back a few years more, somewhere around 2010, after designing a lot of very successful smaller boats, Dennis set out to design the Goldilocks boat for himself and his partner Raquel to live aboard and enable them to start exploring the world by sea.

What he came up with was the LRC58 which you see rendered here and hull #1 called “Koti” has been their full time home near Auckland since it launched in 2013. 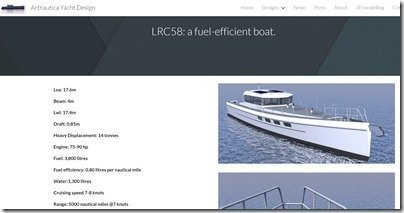 Since then FIVE more LRC58’s have launched from the Aluboot yard in the Netherlands and you can read all about them HERE on the Artnautica.EU website.But wait!  There’s more!!! 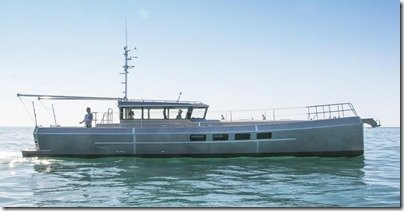 Not only did Dennis design the LRC58, he also built her almost single handedly!  So now you are starting to understand why Dennis was and still is to this day our Goldilocks XPM designer!

The XPM Line of Boats Begins

Christine and I found the LRC name to be too generic and overused in the boating world and so we came up with the more specific eXtreme eXploration Passage Maker or XPM title to better suit this unique style of boats and therefore Möbius became hull #1 of the new XPM78 design.

We spent almost two years working with Dennis in what quickly became a collaborative work of art and engineering and resulted in the completed 3D model and drawings that were used by Naval Yachts to build XPM78-01 Möbius. 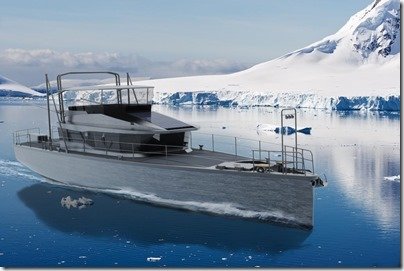 This is a relatively new style of boat which do not yet have a common name or acronym but are all designed and built for a small but growing group of like minded people with a common set of priorities and use cases.  They are most often a couple, sometimes with a child or two, who want to be able to have a floating home that can carry them across oceans and eXplore the most remote spots on the planet and do so with the highest degree of safety, comfort, efficiency and low maintenance. 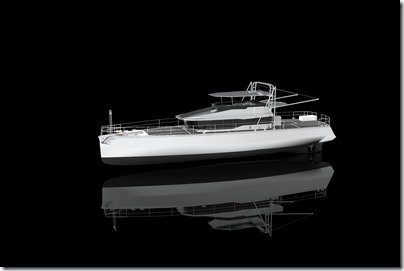 Such requirements tend to determine the overall characteristics of these boats so they are long, slender and slippery all aluminium hulls that are low to the water, self righting and efficient to run with as low amount of maintenance as possible to operate.

Since designing our XPM78-01 Möbius, more and more people have been intrigued by what Dennis calls his LRC or Long Range Cruising boats and have sought him out to design a Goldilocks version of an XPM for them and that’s what brings us to this post.

Over the years as more people became aware of our work building Möbius and chronicling it all with these weekly blog posts, Christine and I have been fielding more and more requests by people wanting to know more about these XPM boats,  In spite of my Emails being even longer than my blog posts, some of these people have been brave enough to keep asking questions and receiving more and more of my novellas aka Emails as their interest grew.  In several cases this has led to them coming to meet with us for lengthy tours of Möbius, Naval Yachts and the Antalya Free Zone and as you’re about to see, in several cases this ultimately led to several signing on the dotted line with Artnautica and Naval to design and build an XPM for them. 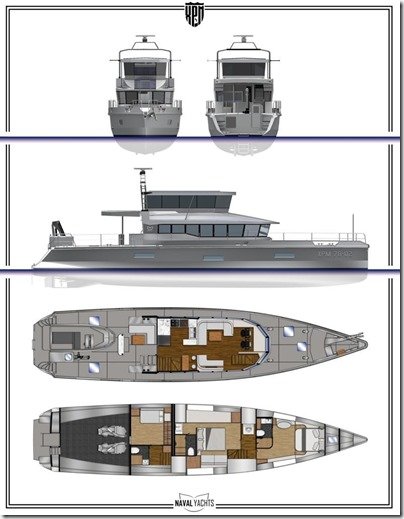 The first are an American couple, Chris and Sebrina and their son Rhys who not only endured hundreds of pages of my Emails but they also very courageously flew over to Antalya last December and we spent several days with them aboard Möbius as she was nearing the end of her build and showing them around Antalya and Naval Yachts.  Apparently they liked what they saw as a few months later they had signed on with Artnautica and Naval to design and build what is now hull # 2 XPM78-02 Vanguard.

These are some relatively recent renders of how hull #2 has evolved. 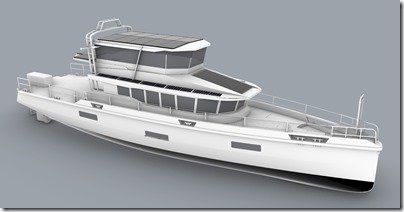 You can see the XPM78 family resemblance and she is based on the same models as Möbius.  However Chris & Sebrina worked with Artnautica and Naval on some important modifications to make this the just right, just for them, XPM78. 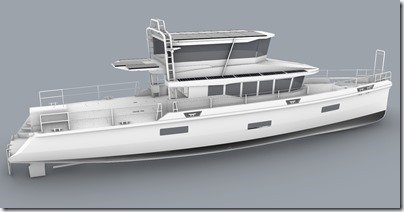 Keen eyed followers might notice that the Pilot House has been lengthened by about 1 from aka 1 meter which is a change that we recommended as well for all future XPM78’s.  More significantly and perhaps controversial, the Pilot House has also been raised by about the same amount to enable the area underneath to become living space that includes a 3rd cabin.Some of the other key changes that Vanguard will have include:

Some will love those changes, others will question but all that matters is that this is what’s best for Chris, Sebrina and Rhys. 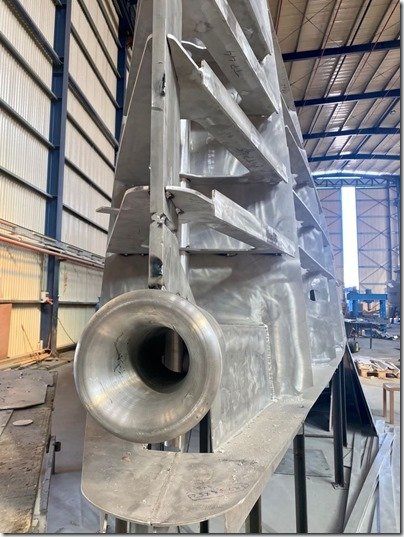 There are a growing number of designs similar to these XPM’s from other companies that have appeared in the past couple of years but almost none of these have gone on to be built.  So pictures like this are a big deal IMHO! 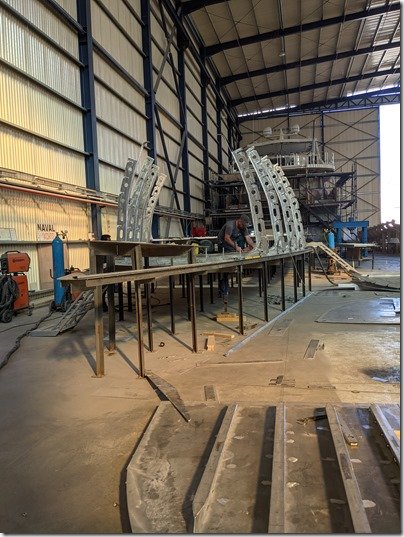 Construction at Naval began in April and matches the way Möbius was built.  A steel frame is built on the shop floor and then the hull is built upside down on top of this.  For the curious, if you go back to posts here starting around April 2018 you can see when Möbius was at this same point and follow the construction from there if you’d like to look into the future of the building of Vanguard. 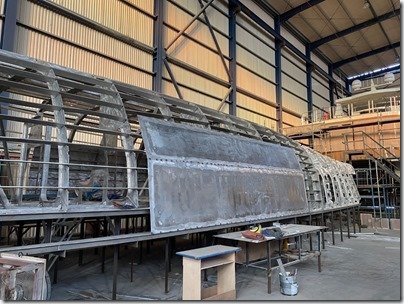 This is the most recent photo I received from Chris which I think was taken a few weeks ago at the end of August.

I believe Chris and/or Naval will soon be creating a blog to cover this build and I’ll be sure to pass that on here for those interested.

Not to be outdone, another couple, Andrew and Lily, also from the USA have recently signed on with Artnautica and Naval to build XPM hull #3 and this one will be much larger at 85’ LOA.

Covid travel restrictions have not allowed us to meet in person yet, but Christine and I have had some video calls with Andrew and Lily and they too have been subjected to my barrage of Emails as I attempt to answer all their questions. 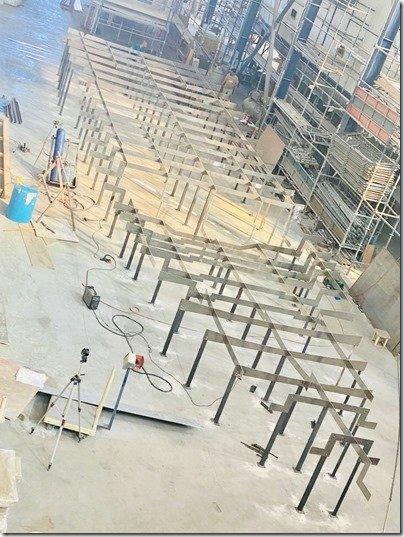 Unfortunately as you may have heard in the news, there has also been a Covid related shortage in the world’s aluminium supply so work on both XPM78-02 and XPM85-01 has been delayed but Naval has been busy getting ready for the aluminium to arrive by building the steel support structure that XPM85 will be built upon.

Dennis and Naval are still working with Andrew to finalize the design so I don’t have much more to show you yet but will bring you updates when I get them and we could not be more eXcited for Andrew & Lily as their dreams are transformed into very real aluminium.But wait!  There is still MORE!!

Meanwhile, in the Netherlands 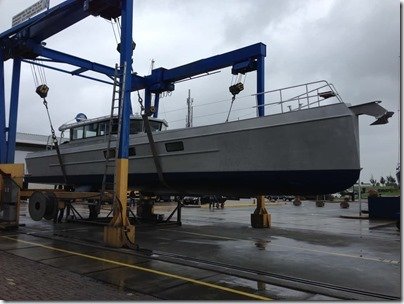 As if these new XPM builds were not enough eXcitement for one blog post, things have been equally as busy or more so over in the LRC world of Artnautica.  Somewhere around 2018 Dennis was in conversation with the owner of LRC58-03 Britt which launched from the Aluboot yard in July 2017. 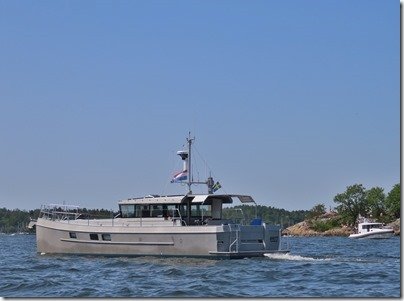 Rob Westermann and his wife Janet have been touring the many waterways surrounding the Netherlands and their conversations with Dennis soon resulted in Rob setting up Artnautica Europe.  Rob and I first met at the big METS marine trade show in Amsterdam back in 2018 and have gone on to become very good friends who have visited with us in Antalya several times.  Rob is eXtremely bright and entrepreneurial and he has been a great partner with Dennis to extend and expand the LRC line of boats being built in the Netherlands as well.

Rob & Janet enjoyed their life aboard Britt so much that they decided they wanted not only more time but more boat and so began a conversation and a whole new design process that has now culminated in the LRC65 which will become the new home for them to continue to explore Europe and the world.

FYI, LRC58-03 Britt is therefore now for sale and can find out more about that and how to contact Rob HERE. 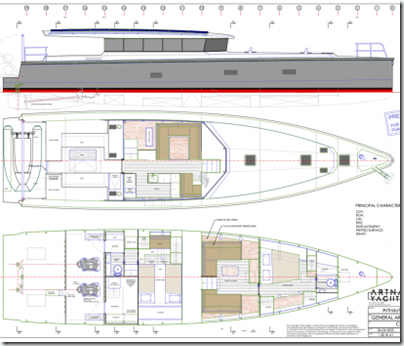 As you can imagine, Covid restrictions are doing their best to get in the way of getting LRC65-01 off the drawing board and into the build, but Rob is tenacious and very experienced so he was able to get in an order for some aluminium just as the supply was drying up and they expect to begin construction in about a month. 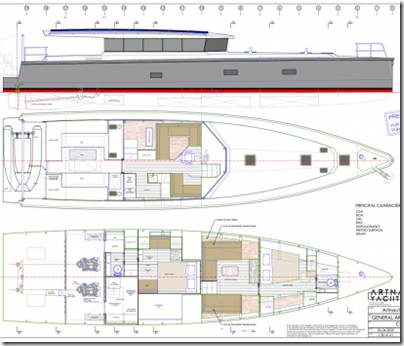 Dennis & Rob have created two layout versions GA 5 and GA 6 have each with different galley, settee, and helm station positions, as well as a different position of the staircase leading forward. This could be interchangeable between the two layout options. 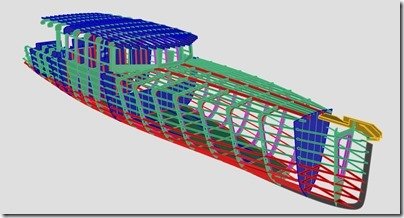 As you can see here in this rendering of the framework of LRC65, the LRC/XPM boat similarities are much more than just skin deep.

Here is a similar shot of Mobius’ framework.  When you peel away the outer aluminium plating, the familiar Artnautica framing signature is very clear to see.

There will be several propulsion options for the LRC65; twins of either Beta 75 or John Deere 4045 DTF 70 (80hp). The single-engine option will have a turbocharged four-cylinder, 130-160hp engine, likely supplied by SABB who make the CPP gearbox of choice and can therefore supply the whole driveline (Deutz, Iveco, and AGCO Sisu).

All the specifications for the LRC65 can be found HERE on the Artnautica.eu web site.

Phwew!!!  That was quite the tour of the XPM Family Tree! 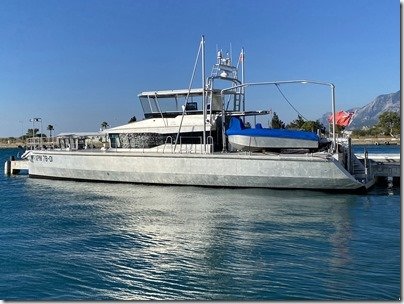 Coming around the XPM world full circle, I will leave you with this photo of the very first XPM, our beloved Möbius.

Hope you enjoyed the tour and if you have any questions or would like to consider creating your own XPM just let me know in the “Join the Discussion” box below or send me an Email to us at wayne.christine@mobius.world