Switching from sail to power

It was Christmas, 2014. We were anchored in the lagoon of an atoll in the Marshall Islands, Majuro, off a gorgeous little motu called Eneko. That was to be only the second Christmas that Wayne and I had spent together. 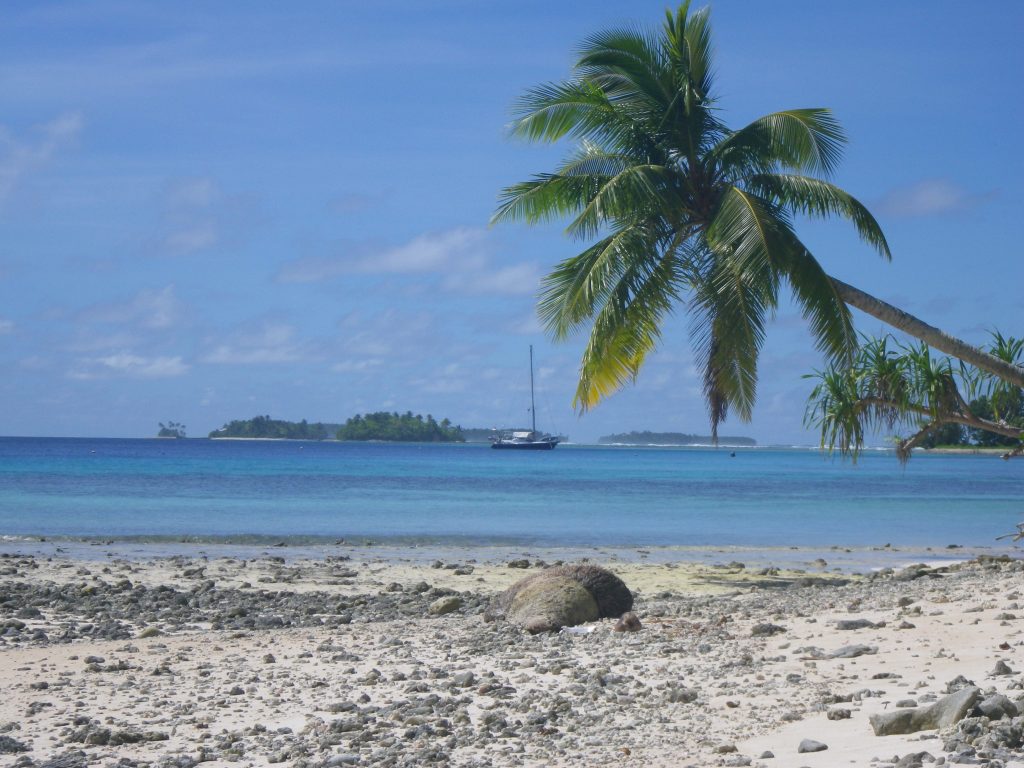 We had met just over a year earlier, when Wayne commented on my author blog, Sailingwriter. I was living aboard my sailboat, a Caliber 33, in Merritt Island, Florida after recently returning from the Bahamas. Wayne had been single handing his big steel motorsailer, LEARNATIVITY, out in the Pacific for about eight years, and he was currently in Fiji. We started up a conversation via email, which led to Skype calls and eventually to my flying out to Fiji for the passage up to the Marshalls. We’ve been together ever since.

So, back to that Christmas when one of the gifts Wayne gave me was the ebook Voyaging Under Power by Robert P. Beebe and Denis Umstot. 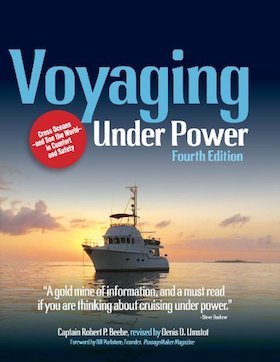 I can remember thinking, seriously? Powerboats? I started sailing as a kid and I learned the word “stinkpot” early on. I’d been a passagemaking sailor since my first job as a delivery cook from La Paz to Long Beach in 1974. Two years later, I sailed across the Pacific in an Islander 44 and spent the cyclone season in New Zealand with the man, James Kling, who would later become my first husband. That boat had only one piece of electronics—a home-built Heathkit depth sounder—and not even a VHF radio.

I learned how to how to use a sextant, how to survive hand steering with a tiller on a 4-day passage when our wind vane broke. I learned to love our Aries wind vane that never let us down. We sailed back to California via Fiji, Samoa, the Line Islands and Hawaii, nearly all against the wind. I’d worked on our bigger charter sailboat  in the Caribbean, sailed on deliveries, and for the previous nine years, I had been sailing solo on my own little boat up and down the east coast of the US and out to the Bahamas. At that point, I’d been sailing for more than 40 years, and it was one of the reasons I fell in love with Wayne—he shared my love of sailing.

So when he asked me to read a book about crossing oceans in a stinkpot, I was stunned. At that point, though, I was behind on a deadline to finish a novel that was due in May. I promised him I would read it as soon as I’d finished my book.

As it turned out, I finished that book and shipped it off to my editor just a few days before we left on passage to sail down to Fiji for the start of the southern ocean cruising season. During my off watch time, I read Beebe’s book for the first time. Somewhere about the middle of the book, I became intrigued. No coincidence perhaps that the middle of book coincided roughly with the middle of that 1800 mile passage across the equator, i.e. the doldrums, and I was finding it a luxury to have 700 gallons of fuel. There were challenges to this idea of crossing oceans under power that I had never really considered, and many of Beebe’s points were valid. While the wind is free, what it takes to catch the wind is not. And sailors motor much more than they like to admit. In order to go faster in a displacement vessel, you need a greater waterline length. We were already sailing in a 54-foot motorsailer, and our maximum speed was only about 8 knots. If we wanted to go faster, what we needed was something long and lean and more efficient. Once you start looking at building a boat over 60 feet, the cost of putting a sailing rig on it is enormous. What if we put that money into fuel instead?

I had lots to think about on that passage.

On the very first day we met in person, Wayne introduced me to the new line of boats that Steve Dashew was building. We went for a walk around the boatyard in Vuda Point, and there in one of the cyclone pits was a boat called BUFFALO NICKEL, an FPB 64. As a long time sailor, of course I knew who Dashew was, but I had not followed this move of his to power. Even then, I’d thought it was a cool-looking boat. My first husband had built a 38-foot aluminum sailboat for a customer in Hawaii back in 1977, and we both had been long admirers of unpainted aluminum hulls.

Serendipity had already played a big part in Wayne’s and my meeting, but when we arrived in Fiji to clear in, there in Savu Savu was another FPB 64, and this time I set out to meet the fellow and get a tour. 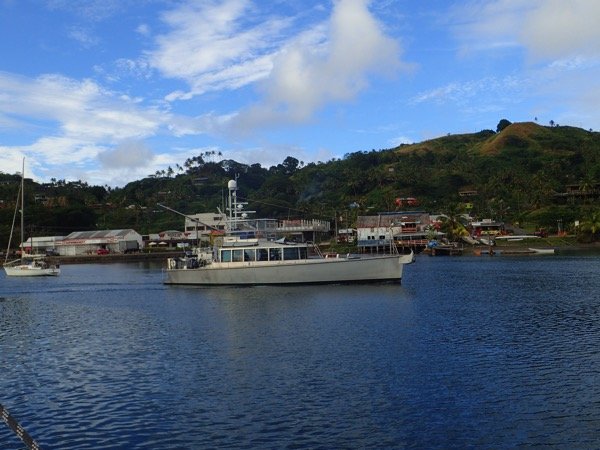 The owner turned out to be a very nice guy from Washington state, Stedem Wood, owner of FPB64-8, ATLANTIS. He graciously gave us a tour and put up with our hundreds of questions for several hours. Hearing about his trip from New Zealand to Fiji that took him just over five days really got me to thinking. What would it be like to be able to do 9-10 knots regardless of the wind direction?

Of course, serendipity was not done with me yet. We left Savu Savu and slowly cruised our way out to the Lau group. There, we met Marie and J.P. Dufour on the 20-meter Malcolm Tennant power catamaran DOMINO that had been featured in Beebe’s book. Again, we were invited aboard and given the grand tour. These folks had built this big cat themselves in Paraguay, and they had so many fascinating stories about that adventure. They were also strong advocates of power cats as ideal cruising passagemakers. They spoke of the ability to do 20 knots when needed, and we watched them retrieve the anchor a few days later and the way J.P. was able to spin that boat around with the twin screws was something to watch. 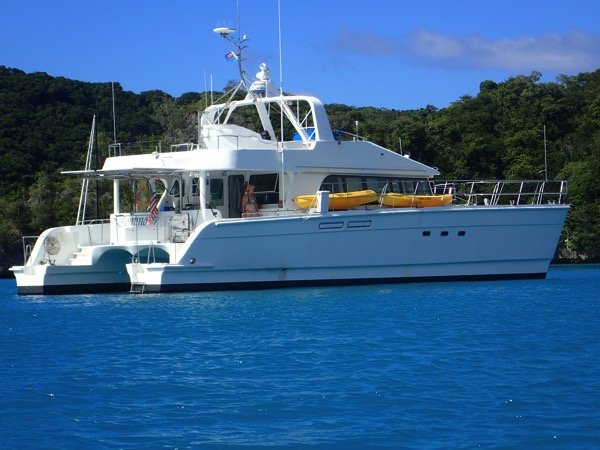 At some point out there cruising through the Lau group of islands, Wayne tentatively brought up the subject.

“What would you think about us building a power passagemaker?”

I took a deep breath and thought back to 1977. My first husband had asked me a similar question back then. We had cruised the Pacific on an Islander 44 that he had built from a hull and deck. Jim was then proposing that we find a mold and have a 55-foot hull laid up to our specs, then build the rest ourselves. I was only 24 years old at the time. What did I know? I said yes. There began a grueling routine of working days in the boatyard, nights as a waitress, seven days a week. Those three years were the longest of my life. I came to say, partially in jest, that purgatory must be a boatyard. You never get out. When we did finally launch that boat that became our home for the next 14 years, I said silently under my breath, Never Again.

And yet, there I was smiling at my new husband, nodding and saying yes.

We had lots of time to talk and dream as we cruised Fiji, but the more we read and talked, the more convinced we both were that this was something we wanted to do—and could do.

Eventually, we made our way back to Vuda Point where we hauled LEARNATIVITY out and started on what would become a full year’s refit. While we were there in Vuda, Stedem arrived on ATLANTIS, and I enjoyed catching up with him. While we had covered about 300 miles sailing around Fiji during the cruising season, ATLANTIS had been up to Palau and back covering well over 3,000 miles. And he certainly didn’t look exhausted. Then, while all the sailboats were sitting in Vuda Marina waiting for a good weather window to head down to New Zealand, ATLANTIS took off. He didn’t need favorable winds, and he would be able to get down there between the infamous low pressure systems that stalk boats on that passage.

That was it for me. I was sold. We decided to move over to the dark side.