Today (Friday Aug 30, 2019) is a national holiday here in Turkey for Victory Day so all of Team Möbius and Naval Yachts is taking a well deserved 3 day weekend.  Victory Day in Turkey commemorates the key Turkish victory against Greek forces in the Battle of Dumlupınar (August 26-30, 1922). The outcome of the battle, which took place in Kütahya province in western Turkey, determined the overall outcome of the Turkish War of Independence (1919-1923).

Christine and I flew back into Antalya on Wednesday evening after a fabulous time away in Napoli and Sardinia so I was able to spend several hours aboard Möbius taking pictures and discussing all the new progress with the various team members so lets go aboard and see what they accomplished while we were away. 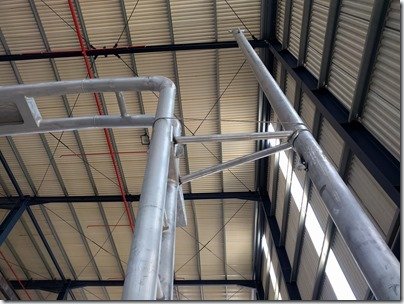 You don’t even need to go aboard to see the most visually obvious bit of progress this past week as the Starboard/Right side Paravane A-Frame pole or boom makes its presence very well known.

Everything is just tacked in place at this point to test out all the various dimensions and fits. 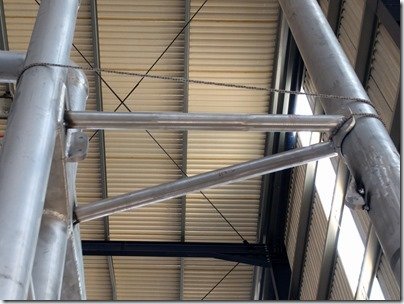 This triangular brace provides a solid support to securely lock the A-Frame in its stowed position as shown here.  The two inner pipe ends of this brace will be bolted to the Arch so they can be removed if needed when the A-Frames are tipped down on deck for canal mode journeys.  They are just tack welded here for fitting purposes. 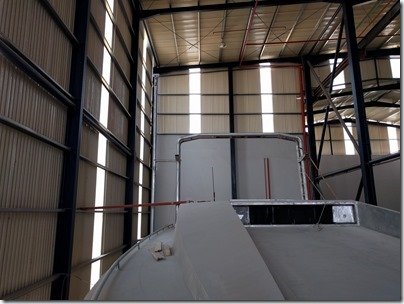 I had to move all the way to the Foredeck to be able to get this more complete view of this vertical pole and give it some relative scale.  Overall length from the bottom hinge pin on top of the Rub Rail to the upper end is 6.2m/20.3ft which is easily the highest point on the boat.  However both these Paravane A-Frames and the whole Arch beside it can be folded down to dramatically reduce the Air Draft, the height above the water line for situations such as navigating canals or putting the boat in a hunkered down hurricane mode. 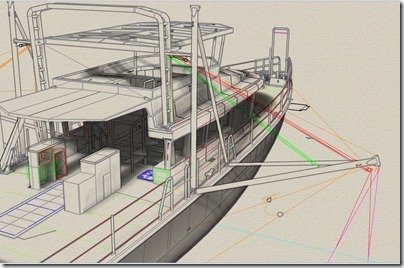 This is a much earlier version if the Paravane A-Frames and rigging with much shorter pole lengths but will show you how the A-Frame hinges on the beefy Rub Rails and the basic components of the rigging to deploy and control the A-Frame booms and the “fish” or paravanes which are suspended from the outer ends of the booms and run in the water about 5m/18ft below the surface.

** NOTE:  Don’t be confused by the apparent two A-Frames on each side as this design/analysis rendering is showing the A-Frames in both stowed (vertical) and deployed positions.  There is only one A-Frame on each side.For those interested in the rigging:

NOTE:  These are early iterations of the rigging and I will provide an updated version as the build continues. 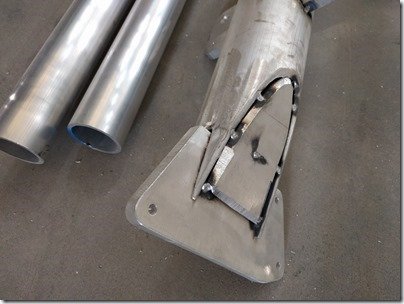 Here is close up of the top/outer end of the A-Frame boom poles with the plates tacked in place and edges well chamfered to allow full penetration of the welds.  The smaller diameter pipes on the left are the angled tension poles of the A-Frame. 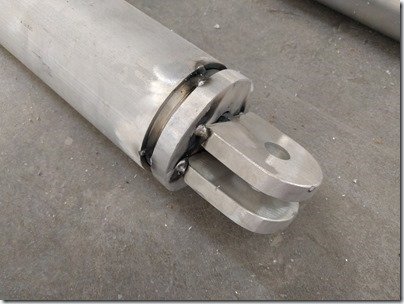 At the other bottom end of the vertical A-Frame pole this massive assembly of 20mm / 3/4” thick plates and the disc inserted into the pole with full chamfer at the bottom of more through welds. 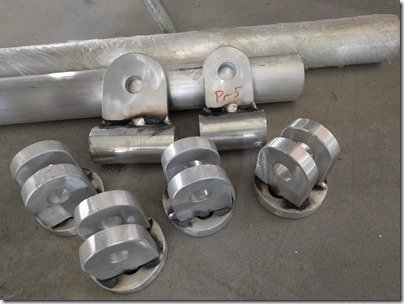 These are some of the same kind of fittings where the smaller diameter angled poles of the A-Frame attach to the outer end of the vertical larger pole. 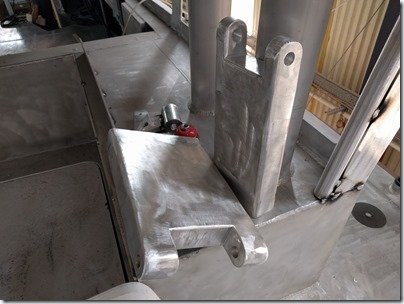 These are the pair of hinge halves which will be inserted deep into the hull framing through the Rub Rails.  These are machined from 50mm / 2” thick aluminium plate and will have SS hinge pins. 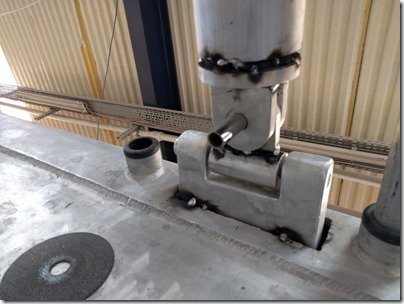 The Starboard/Right side hinge at the bottom of the vertical A-Frame pole with all its parts tacked in place for test fitting.  Comparing the length of the hinge plates in the upper photo you can see how these plates extend deeply through the 10mm thick Rub Rails and down the hull framing.  When fully welded these will be about 5X the required engineering strengths which helps us SWAN when we have the Paravanes deployed.

SWAN = Sleep Well At NightThere will be thick Delrin washers on both sides of the inner hinge cylinder to keep it centered and moving freely.  The SS pipe is being standing in for test fitting only and will be a SS through bolt in the final assembly. 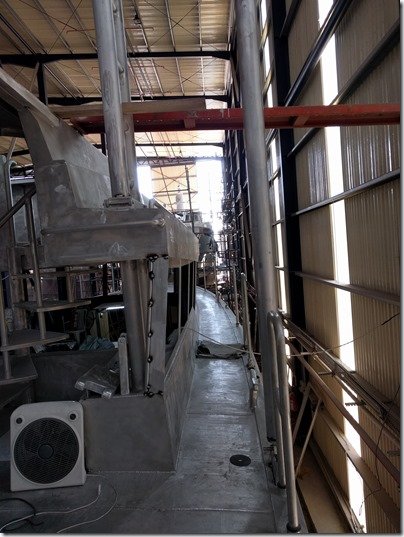 We designed the Arch and Paravane A-Frames to do their jobs well and while not compromising the access when walking along the side decks.  This picture confirms what we succeeded very well I think. 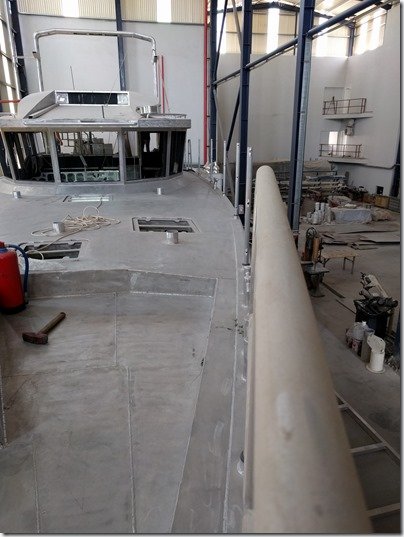 Safety is the first of our four fundamental SCEM principles, Safety Comfort Efficiency Maintenance and you can see many examples of this in the photo above and this shot along the top of the solid railings on the bow’s pulpit and down the line of stanchions on the Port side.  If you look closely (click to enlarge any photo) you can see other examples such as the full set of handrails along the top of the Pilot House roof, the solid hand rail assemblies and stanchion poles and the A-Frame poles themselves all of which combine to make it very safe to walk along these side decks should it ever be neccessary in eXtremely rough seas.  There should never be any need for either of us to be outside the Pilot House or SkyBridge in such conditions as we have designed all the systems and functions of the boat to preclude this, however we also design with “readiness for the unexpected” in mind and when it comes to Safety we try to account for such unexpected “Black Swan” type events as much as possible. 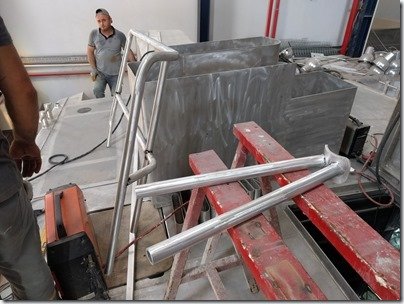 Uğur and Nihat were also busy on the Aft Deck fabricating and fitting the solid handrails for the Aft Starboard corner of the deck where the stairs go down to the Swim Platform.

One of the triangular support braces is tacked up in the foreground. 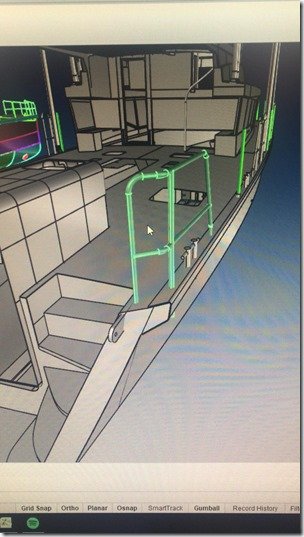 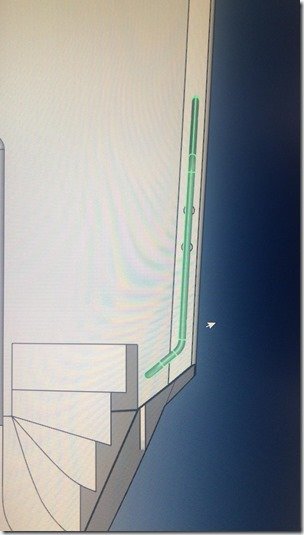 Yiğit and I were able to continue our collaboration while I was away in Italy using Email and WhatsApp and Yiğit came up with this design for the Aft Starboard handrail.

There will also be a handrail along the side of the “dog house” on the left and there will be three Dyneema lifelines snapped across the stair well opening. 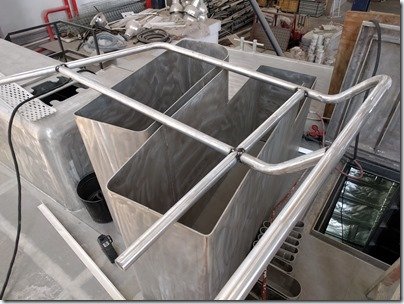 Here is the Aft Stbd Handrail all tacked up and ready for fitting into the same type of Delrin lined sockets through the Rub Rails as with all the other Stanchions and Handrails. 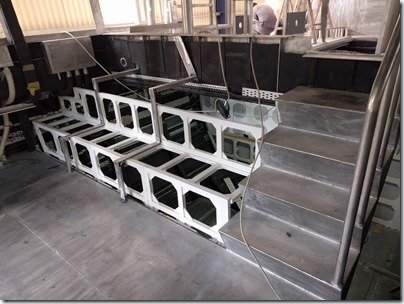 Moving inside down the steps from the Aft Deck, the stepped aluminium and wood grid is all in place and forms an extremely rigid transition between the Galley cabinetry up top here and the Guest Cabin down below.  Yiğit and I tried out our own stress test on this transition grid with each of us standing on one of those two aluminum step frames and jumping up and down on them.  Solid as a rock!

Several of you asked why this type of stepped transition was used rather than bringing a full bulkhead up and you can hopefully see why here in this photo.  The bulkhead running along the top of the photo is the most massive of any on the boat and it spans the entire beam/width of the hull to form the very aft end of the Pilot House and SuperSalon.  Then on the left you can see how the top of the watertight Basement area creates the floor of the SuperSalon and the 3/4 wall in the Guest Cabin which along with the stairs forms an extremely strong combination of boxed beams surrounding this transition area between the Galley and the Guest Cabin.  Building it in this way gave us both eXtremely strong and rigid framing as well as creating maximum use of both spaces.  We are very pleased with how this has turned out now that we can see it in real life. 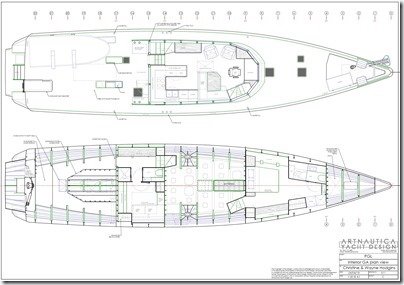 This transition takes a while to visualise and hopefully looking at this GA plan view and a few of the renderings of the finished Galley and Guest Cabin will help. 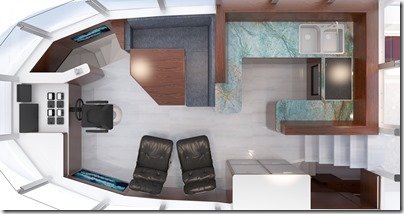 Looking straight down at this plan view of the whole SuperSalon and comparing this to the previous photo of the transition grid above you can see how the countertop with the induction stovetop and Speed Oven below at the end of the Galley on the right side here extends into the Guest Cabin space.

It may help if you look at where the bottom step down into the Galley area is in this rendering and the photo above to get an idea of the overlap. 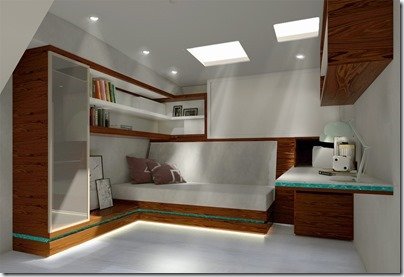 Moving down into the Guest Cabin and looking across to the forward Starboard corner where the Basement bulkhead forms the Guest Cabin wall on the left side here you can see how the stepped transition is used to create the dropped ceiling on the upper left and how the bookcase fits in under this. 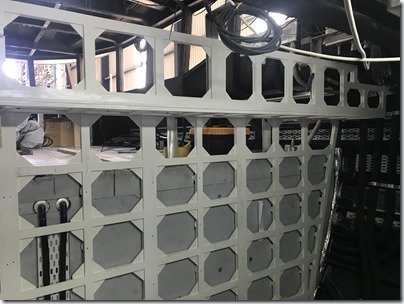 Flipping back to reality here is what that transition step grid looks like from the Guest Cabin side. 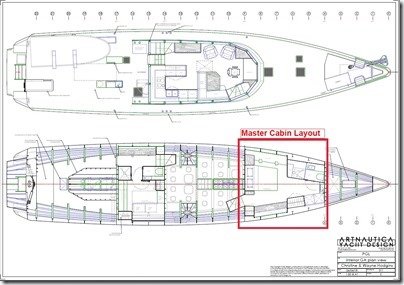 Meanwhile, forward in the Master Cabin Ömer and Selim have been busy building the wall grid for the shower and Head area in the Cabinetry workshop and then bringing them on board and fitting in place. 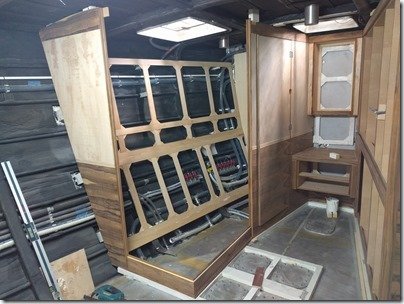 The door into the Head up by the Vanity sink is now in place and the outer corner of the shower is framed in at the bottom of this photo along wtih the half wall which makes the transition from the glass wall to the Port side of the hull.  There will be a similar header frame for the corner above to provide support for the aluminium channel which the edges of the two etched glass wall panels will fit into. 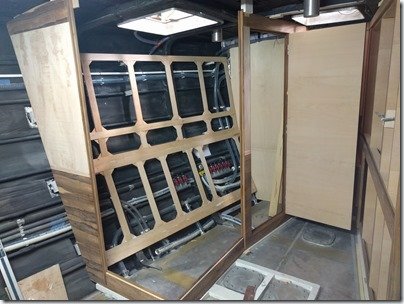 Opening the door you can see where the toilet will sit at the far end up against the bulkhead with the Forepeak on the other side.  Access to all those red handled ball valves on the hot and cold manifolds as well as all the hose connections to the drains and into the water tanks below the floor…….. 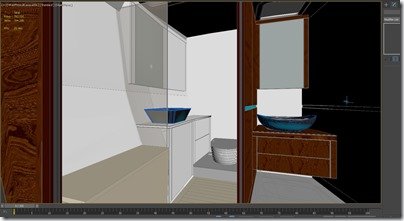 …… will be provided through removable backs inside the cabinets running down the hull sides and below the seat in the shower which you can visualise better with this quick rendering. 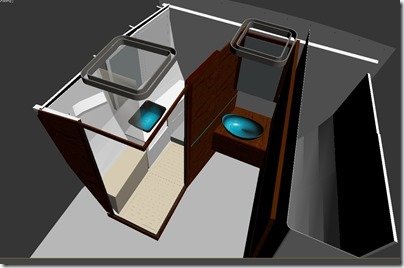 This overhead shot shows the overall layout of the front end of the Master Cabin with the two large hatches overhead and the Vanity sink in the center and wardrobes flanking the Starboard/Right side of the hull. 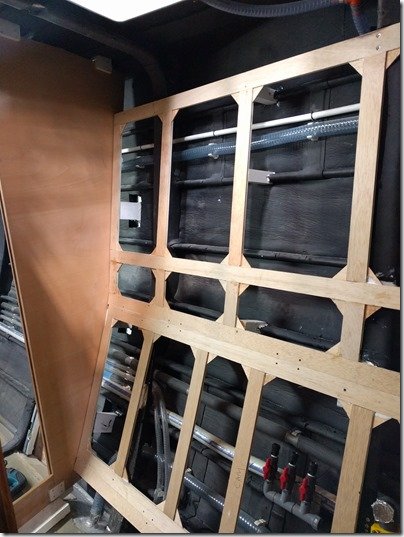 Standing with my back inside the Head area with my back against the Forepeak wall looking aft you can see the inside of the half wall and the construction of the wall grid.Not bad progress for a four day work week and we’ll be back to full time again next week.

Hope you enjoyed this latest progress update and please do send in any and all comments, ideas and suggestions in the “Join the Discussion” box below.

Thanks for all your input and for joining us on this adventure.  See you again next week for more.