Passage Making the Sea of Standards to Common Connectivity

I’ve been a big fan of Victron electrical components and the company for a long time since discovering them when I first bought our previous boat sv Learnativity in Sidney British Columbia back in 2005.  She was and still is a 1994 all steel 52’ Bruce Roberts designed cutter with a raised pilot house and was wonderfully overbuilt by a local builder in Sidney.  After searching the world for my Goldilocks sailboat at that time, and my first boat ever, it made me smile to eventually find her a few miles the closest thing I ever had to a “home base” when I was growing up which was Victoria BC on Vancouver Island.  I am an “Army brat” having been born into a military family in the sense that my Dad was a chef in the Canadian Army Service Corps and so we moved about every 2 years to a new base somewhere in Canada or Europe and I never grew up with an understanding of home being a building.  Instead, home for me was wherever my family was and that’s remains my model to this day.  A big reason why living full time aboard a boat has worked out so surprisingly well for me I guess. 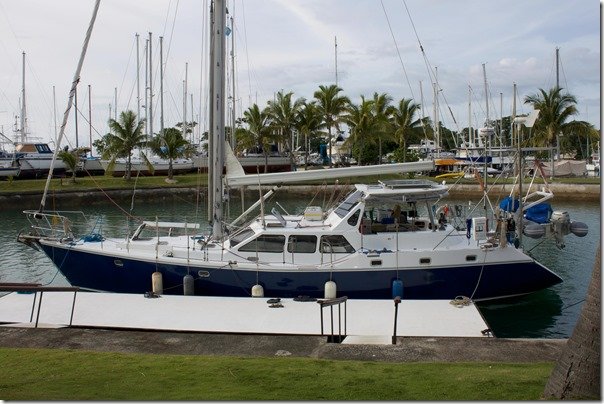 I spent the next two years doing a major refit to make her fully outfitted and up to the task of being sailed single handed around the world as that’s where I was headed.  Part of this refit was a major upgrade to all the 1994 based electrical and electronic systems and that’s how I got to know Victron equipment.  Learnativity was a word I had invented many years earlier and seemed like the just right name for this crazy adventure I was bound and determined to pursue.  Amongst the endless list of things I learned over these past 13 years is how much of your safety and comfort at sea, and at anchor, depends upon electricity and so I gained a whole new appreciation for the value and significance of having a rock solid electrical system on any boat I was going to captain  Möbius offers me an amazing new and rare opportunity to design and build the best possible electrical system based in large part on my past experience as well as what I am able to learn from others.  There is a plethora of choices of manufacturers and we have the wonderful problem of too many good choices, but going with what I know to work well, and seeing them do things such as this support and adoption of Signal K, is why I’ve decided to go with Victron equipment on Möbius for things such as chargers, inverters, isolation and DC to DC transformers, solar MPPT controllers and battery monitoring systems.

**  Just to be clear, and as with all decisions we make for designing, building and outfitting Möbius, what is “just right” is also “just for us” and not meant to imply that our choices should be what you or others do.  I have no affiliation with Victron or any other manufacturers so my interest here with these postings and this blog is simply to share our experiences and thinking as so many others have done on their blogs and books and sites which have played a huge part in our learning and decision making.

OK, dismounting from this horse named Tangent, let me get back to the point of this article and my reference to Victron.  Because I had such great experience with the Victron chargers, inverters, isolation transformer and battery monitors on Learnativity Christine and I have specified all Victron equipment for our new boat Möbius.  I will write much more in future posts about our thinking and planning for the overall electrical system on Möbius in future posts, but I wanted to put this short one up after just reading this new posting on the Victron blog about Victron’s recent decision to join and support an open source initiative I’ve also been following for the past few years called “Signal K”.

I will let the article’s author John Rushworth tell you all about Victron’s decision in his article I linked to above but to put this in context for myself and other boat builders, owners and enthusiasts out on the water in any form of boat, as John writes, Signal K is about the development of a free, modern, Open Source, universal marine data exchange format.  A more comprehensive description is the one on the Signal K website:

“Signal K is the next generation solution for marine data exchange. It not only allows for communication between instruments and sensors on board a single vessel, but also allows sharing of data between multiple boats, aids to navigation, bridges, marinas and other land-based resources. It is designed to be easily used by Web and Mobile applications and to connect modern boats to the Internet of Things”.

Whether you are a boater or not I think we have all known the frustration of not being able to share data of many forms with others because the data is saved or transmitted in a format that is not compatible with the ones we are using.  If we use the analogy of electricity this would be the ongoing frustrations and limitations any traveller knows when your physical plugs don’t match up be they AC plugs in the wall and at the ends of the cords on our electrical devices, or data connections such as USB, DVI, HDMI, serial, RJ45 and the list goes on almost to infinity it seems.  And the data itself can be incompatible with other data as well which might be analogous to 120 vs 240 AC voltages, or 50 vs 60 Hz power.  Standards are the answer to most of these issues but having worked within the international standards worlds of IEEE and ISO for almost 20 years in a previous life, we used to have the not so amusingly say that “The great thing about standards is that we have so many of them!”.  Still an all too real problem today and one which I’m personally dealing with on my personal devices such as my Nexus phone and Lenovo laptop which both use the newest iteration of USB C for all their data and some power connections.  USB-C is great, small, reversible, fast, covers data, sound, video and power.  BUT of course it doesn’t help when my other devices and cords use previous versions of USB A, B, mini, etc.  As I said, we ALL know this all too well.

In the marine world these challenges have been and continue to be with both the physical connections and the data formats and transmission standards.  The advent of NMEA 0183 was a huge leap forward from a mostly all proprietary past and this was then updated to NMEA 2000 or N2K as it is often abbreviated.  I went through this transition on Learnativity and learned a great deal not the least of which was a great desire for the next leap forward to whatever the next standard would be.  As you may know and will read in John’s article, while NMEA 2000 has been and remains a huge help with interconnectivity of the many devices on our boats, it has some significant limitations not only technically but with the standard itself being quite closed and limited to development and improvements mostly by the manufacturing community.  Kudos to this community for the truly immense and difficult work they have done and their solutions have really revolutionised setting up and maintaining and using electrical devices and signals on our boats.  However if there were to be a truly “open standard” which anyone could support then as history has clearly demonstrated I think, such a standard would progress much faster and benefit far more people, companies and organisations.  And THAT is what Signal K, amongst several others, is all about.

The biggest challenge I would opine, lies within the “amongst several others” part of that last sentence.  For standards themselves are NOT the true solution, the ADOPTION of standards is when things really improve.  Going back to the electrical standards while it is very helpful that within one country or region there is usually a common standard for the AC plugs and receptacles, but as soon as you travel outside these areas you quickly experience the “many standards to chose from” problem and you end up carrying a whole bag full of just power adaptors to go along with your bag full of USB adaptors and converters.  What would be REALLY revolutionary and powerful is to have ONE standard become the defacto standard for all these and that is what Signal K and more so this Victron support outlined in this article above is all about.

You don’t need to know the intricacies of the Signal K standard itself, I certainly don’t, to appreciate the potential of having this, or any other standard for that matter, become a defacto standard.  A standard that would be adopted by all manufacturers and available to all of us to use and benefit from.  Hence my excitement and support for Victron in joining forces with Signal K by choosing to adopt it and support it within their product development going forward.

I certainly have no idea if Signal K is up to this daunting challenge, nor that it will be widely let alone universally adopted by manufacturers.  As you’ll read in the article it is very much undecided if the manufacturing community will adopt Signal K and the Signal K standard itself is still very much in the early stages of development but all great journeys are born out of such small steps.  I can however appreciate the promise and do my best to promote and encourage things like Victron’s adoption and support for Signal K and hence this posting so you too can be aware and consider ways you might assist with realising this form of electrical and data nirvana.