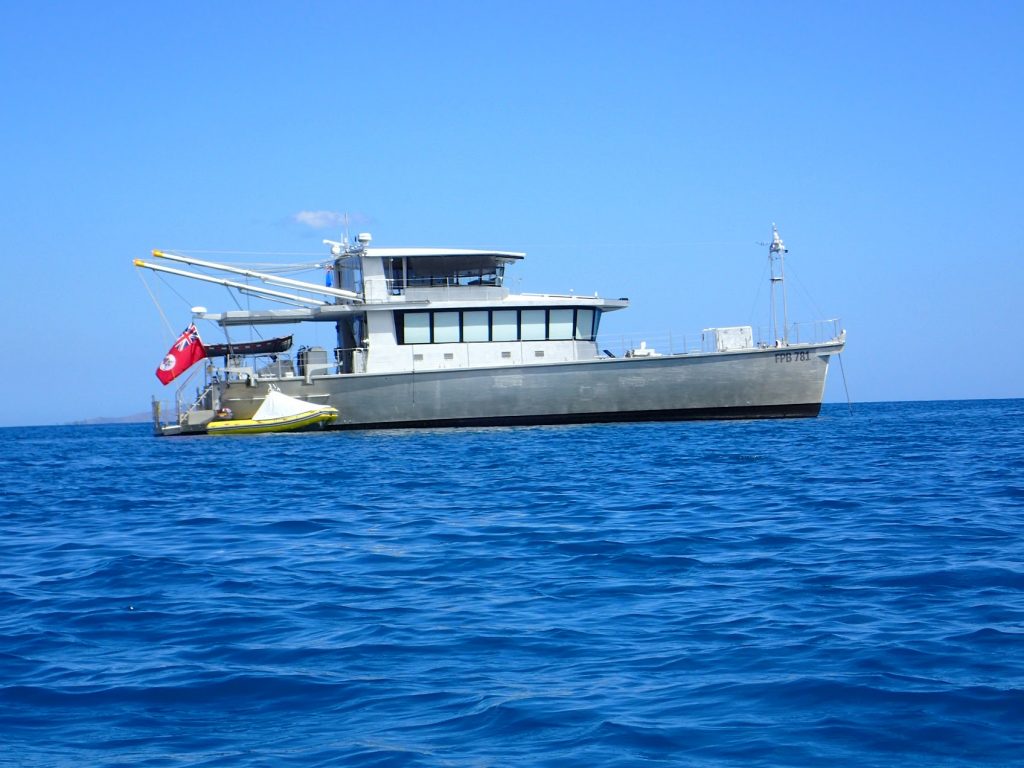 In early September of 2016, Wayne was off on his second boat-building-related trip to Turkey with his bidding package from Dennis in hand, while I returned to LEARNATIVITY in Fiji by myself. We had left the boat in a hurry( to return for the birth of a grandchild) just days after putting her back in the water, and things on board were a mess. I spent my first night back aboard sleeping on the settee because our bunk’s mattresses were removed and the plywood half pulled up while the rest was covered with tools, paint cans and boat bits.

During my first days back as I tried to get the boat sorted out and get our Fijian helper Ben back to work putting insulation in the engine room, I noticed a post on the Dashew’s Setsail website saying that they were heading up to Fiji in their own newly launched FPB-78-1, COCHISE. There are only a few places to clear in to Fiji, and I suspected they would soon be coming my way. Two days later, that proved to be true. On my evening walk out to watch the sunset with my dog Barney, I sighted COCHISE anchored outside the entrance to Vuda Point Marina. 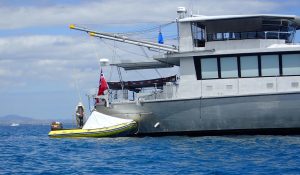 The next day, I kept watch, hoping that I would be able to meet them if and when they came ashore. Finally, the yellow inflatable RIB came ripping into the harbor, but instead of tying up and staying, Steve dropped off Linda and a couple of other people, and he took the dinghy back to the boat alone.

I decided it was now or never. Our dinghy was out on loan with a friend, so I ran back to LEARNATIVITY and pulled out the bag containing our inflatable tandem kayak. Quickly, I put the bits in to support it, and with the help of the foot pump, I managed to get the boat and seats inflated.

I didn’t really think I would be able to meet Steve, but I knew I could get close enough to take some photos that would make Wayne so envious. I grabbed my little Olympus underwater camera, a hat, a paddle and my dog, and we took off on our little adventure.

There was no sign of anyone on board when I first arrived. I figured since they clearly had guests on board, he was probably enjoying having the boat to himself for a few hours. With Barney as my scout on the bow, we paddled in closer, and I began to take some photos. And then Steve appeared out on deck. He climbed down onto the swim step aft and then stepped into the dinghy. He wasn’t happy with the way the small boat was tied up and bouncing in the wind chop.

Now normally, I am fairly shy and not the most social person, but I figured this was a moment I couldn’t afford to pass up. I paddled in closer, he looked up and smiled, and I shouted hello. I told him I was admiring his boat. He sat down on a pontoon, and when I paddled alongside, he grabbed my kayak’s lines.

What struck me most at first was how unassuming he was. Clearly, there I was as a fan, but he made me feel comfortable right away. While he does speak with self-assurance and authority, he was also open and friendly and kind to this stranger. Fortunately, I know someone who knows Steve from way back when they were young men sailing outriggers off Malibu Beach, and when I told him about our shared friend, Steve recounted a story about a delivery they had done together in winter sailing south from New England. And so we began swapping sea stories like cruisers do. We laughed together when I told him that I had first sailed to Fiji in 1976 on a boat with no electronics, not even a VHF radio. He said something about how his RIB —rigged with forward facing sonar, a GPS chart plotter, VHF, etc.— had more nav gear than early boats he had sailed around the world. After a while, he graciously mentioned how much he was enjoying our talk. He explained that it had been four years since they’d been cruising, and he missed swapping sea stories with other cruisers, especially one who had been around back in those old days. 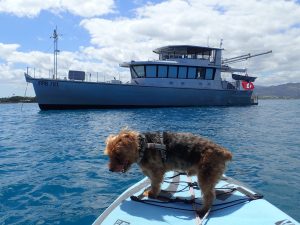 I mentioned that we had met Stedham on the FPB-64, ATLANTIS, too, and we talked for a while about how many miles the owners of the different 64s had covered. Eventually, I worked up to courage to tell him that my husband was off on a trip to Turkey and Tunisia with bid proposals for a long slender passagemaker we planned to build for ourselves. We talked for a while about building in different places in the world, and he spoke about all the US materials and supplies that he had brought into New Zealand because he preferred certain American suppliers. I asked him if he knew of Artnautica and the designer Dennis Harjamaa. He said he had heard of the LRC 58 being built by Dickey Boats that had recently been in the Auckland Boat Show. And of course, because he is Steve Dashew, he went on to explain how much better the FPBs were. For Steve, the FPBs will always be the best boats on earth, and he certainly does have the experience to back that up (and the marketing expertise). But, by the same token, I think he respects that we will learn so much through this building process just as he has learned from every boat build.

After we said our good byes, and Barney and I paddled our way back to the marina, I made myself a little wish. I hope that one day MÖBIUS and COCHISE will be anchored side by side in some far off bay, and we can invite Steve and Linda over for a drink. I would like to think that he would be rightly proud of the impact he’s had on the design of ocean-going powerboats.