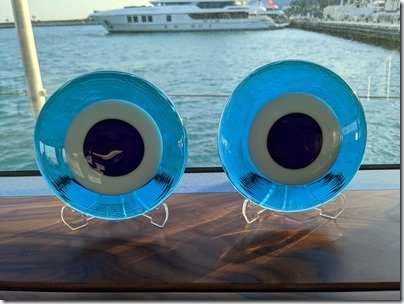 As we all continue to work our way through the commissioning of systems and getting XPM78-01 Möbius fully ship shape and sea worthy, it was another week of good progress but nothing too visually exciting for you I’m afraid.  However, progress is being made and there were some significant accomplishments this week so come on along for this week’s Show & Tell.

You may recall seeing these beautifully handcrafted glass “Blue Turkish “Evil Eyes” that Christine found in Antalya when I posted about them in THIS previous blog post last month.  In Turkish, these are called nazar boncuğu and they are seen on almost every boat here in Turkey and many other countries.

The”Evil Eye” moniker is a bit misleading as these are a GOOD thing with folklore having that they protect you from evil and bring good luck.

Hope I didn’t offend the Evil Eye for making it wear this patch while the adhesive dried overnight!

I like twisting a straight line spectrum so that the two opposite ends meet so this seemed like the perfect spot to have these beautiful glass eyes cozy up to their opposite lean and mean XPM78-01 military font on the bow.

What do you think?

The major milestone/accomplishment this week for sure was getting the hydraulic steering cylinders re-machined, installed and finally working with NO leaks!

We are using Kobelt 7080 balanced cylinders that have a 3” ID with a 12” stroke cylinders and as you can see they are Beautiful Brutes.

Dennis and I spent a good long time with the great engineers at Kobelt in Vancouver BC and this is the cylinder geometry that we came up with.

There are two of these SS bleeder screws, one at each end which you use to bleed the air out of the system as you first fill it up or after working on the system.  The threaded bleeder screw has a 4mm OD SS ball bearing underneath which when tightened easily seals of the 1000 PSI pressures that we can see in rough weather steering.  However the body of these end caps is brass which is relatively soft compared to SS and so you have to tighten these the Goldilocks Just Right amount or else the SS ball deforms the brass seat which is what had happened to several of these bleeder screws when they were originally installed and hence they leaked.

Getting new end caps sent over from Vancouver would have taken too much time and money so I thought I’d try to re-machine the angled brass face at the bottom and see if I could renew the cylinder end caps this way.

At the left and right ends of the bottom section drawing you can see how these bleeder screws (#11) work.

Lance and Keivan who I worked with at Kobelt continued to be absolute super hero’s for me throughout the many years I’ve been working with them and were able to send me this dimensioned drawing of the bleeder screw and several other drawings for me to figure out how to re-machine the brass faces.

They also dug up that the included angle of the brass face is machined to be 1180  so I had all the info I needed to fabricate a little re-facing tool.

Hard to show you but here is the little tool I came up with.  It is the end of a broken 4.5mm titanium drill pit which I ground the end to a 1180 angled cone shape, a bit like a sharpening a wood pencil and then used a very thin cutting wheel chucked in my ever handy Dremel tool to cut these four groves which created the sharp “teeth” to cut the brass seats inside the end caps.  The trick was to create a tool that was part cutter and part burnisher because the face of the seats need to be very flat and even all around for the SS ball to seal.

I was pushing to get this all done as soon as possible so I didn’t get any photos of the process but I clamped the brass end caps in the blue vice you see in the background and then chucked my little tool bit in my drill press and carefully removed just enough brass to renew the seats yet not take off too much brass and weaken the seal.

I’ve dragged that drill press around the world with me for over 40 years and this is a good example why.  And Yes! it is about to get mounted in my Workshop on Möbius for another world tour.

From there it was a relatively straight forward task of putting the cylinders back together again and remounting them to the AL tiller arm on the Rudder Post at one end and to the brass ball socket joint on the other outbound end.

Connect the hydraulic hoses, fire up the Accu-Steer HPU400 24V Hydraulic Power Units (pumps) and then bleed the whole system.steering pumps.  Once I had all the air out I was eXtremely careful to tighten those bleeder screws to that Goldilocks torque and then test by running the pumps briefly up to their max 1000 PSI.

….. check out underneath those bleeder screws …..

*  I think I heard Möbius release a soft sigh (and a few other people at Naval as well) to finally have her steering back in full working order again.  And me too!

Stand Back!  Free for All in the Free Zone!

While all this work was going on aboard Möbius, there was MUCH more action happening all around us every day because for the past few months there has been 400 million Euro construction project of the launching facilities at the Free Zone.  Check THIS very well done time lapse VIDEO ANIMATION which does a great job of showing how the whole new harbour facility works.  A very innovative idea with that cable raised platform!

The dramatically enlarged launching bays called for an equally enlarged TraveLift and so over the past 3 weeks, this tiny little 560 tonne TraveLift was being assembled right beside us and this week he sprang to life and has been an eXtremely busy boy!

With no launching facilities in the Free Zone harbour for the past 3-4 months there has been a huge backlog building up of new boats waiting to be launched and older ones waiting to be hauled out for their refits.  This week those flood gates opened up and they have been launching and hauling out boats every day.

Such as this classic trawler style Bering 80.

This 36 meter “Phantom Phi” boat by Alia shipyard.  This is a support vessel for a super yacht and these are often referred to as “Ghost” or “Phantom” boats as they are not to be seen by the superyacht they are supporting.

This shot will add some perspective for you to see the relative size of the raised platform bay that they will be installing next.  Check out the link to the animation above to see how this works and I think you too will be impressed.

Out behind us is one of four 25m Turkish Coast Guard boats launched this week by Damen Yachts.

I have lost count now but I’d say well over 20 boats like these have launched this past week so there is never a dull moment here in the Antalya Free Zone.

And that’s the week that was April 12-17 here at Naval Yachts and aboard the Good Ship Möbius.  Hope you enjoyed this brief update and I will try to have more for you in the next weekly update.

Please be sure to leave all questions and comments in the “Join the Discussion” box below and I hope you will be back for more next week.