When we were going through the process of choosing a boat builder, we knew that the location mattered a great deal to us. We didn’t know for sure how long it would take to build the boat, but we knew we would be measuring the time in years, not months, so it had to be someplace we would enjoy. That played a big part in why we chose Turkey. When we first announced we were moving here, lots of people ask us if we weren’t worried for our safety, or were concerned about the standard of living over here. So many people don’t know what a gem this country is. The archeological sites are extraordinary, the nature is stunning, and it’s a modern, well-developed and tolerant country. Even more so, lately, lots of folks have written asking if the political and economic situation is impacting us. I hope that by sharing in this post a little of what our day to day lives are like here, our friends, family, and followers will understand better why (aside from the great boatyard at Naval) we like it so much here. 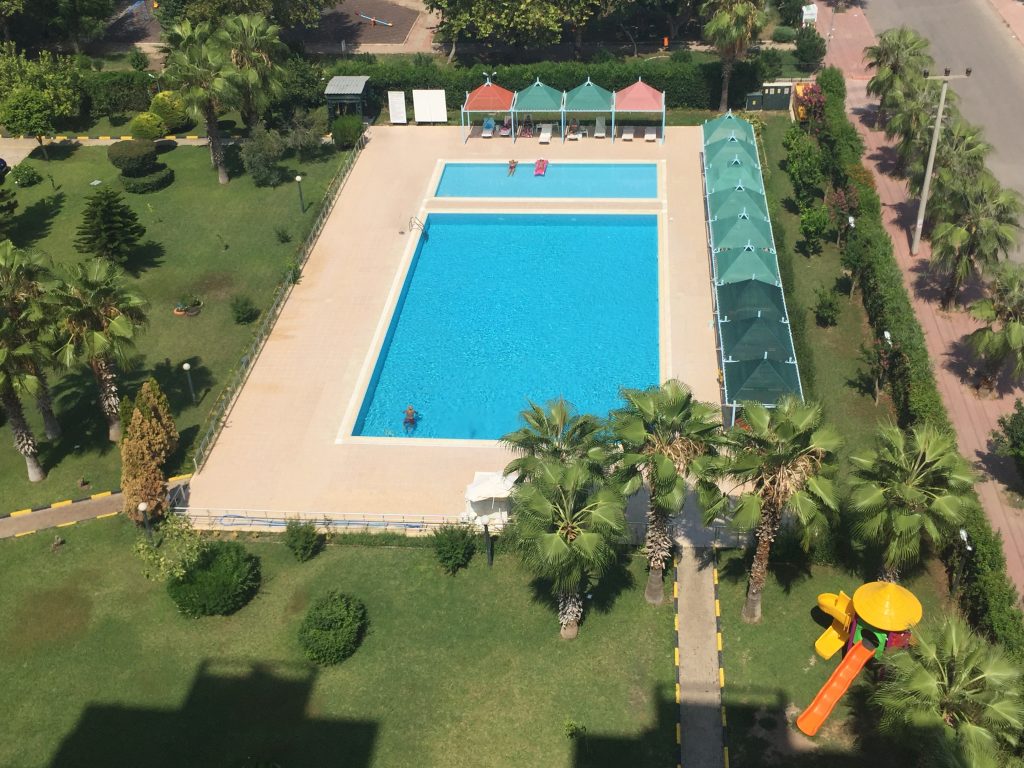 In February 2018, we signed a year’s lease to rent a three bedroom, two bath,1900 sq. ft. fully furnished apartment, and after more than 6 months of living in the place, it has become home. We are on the 9th floor of a 12-story building, and there are only two apartments on each floor. The three buildings in our complex are arranged around the enormous swimming pool and a small playground you see in the photo above. There is 24-hour security on the gate supplied by three very kind gentlemen who smile indulgently at our attempts to greet them in Turkish. One of the three bedrooms is set-up as my office and out the corner window, I can see a small strip of the blue sea over the rooftops in one direction and the imposing granite mountains in the other. For this, if we count rent, maintenance fees and utilities, we are still under $500 a month. 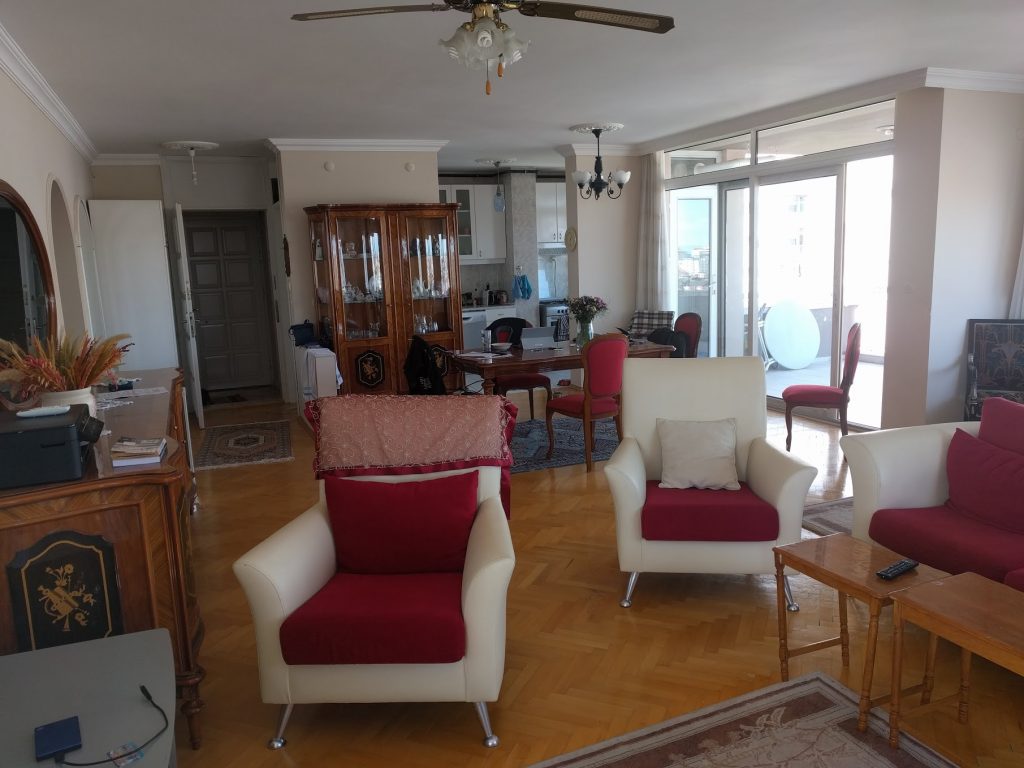 Our apartment is located about six blocks from a long gorgeous beach that was nearly empty in the winter, but is now covered with tourists from elsewhere in Turkey, and primarily from Eastern Europe. It’s not unusual here to find restaurants with tourist menus in English and Russian. The Free Zone where Naval Yachts is located is a kilometer or two from the apartment, and for the last month or longer, Wayne has been riding his bike there every day. 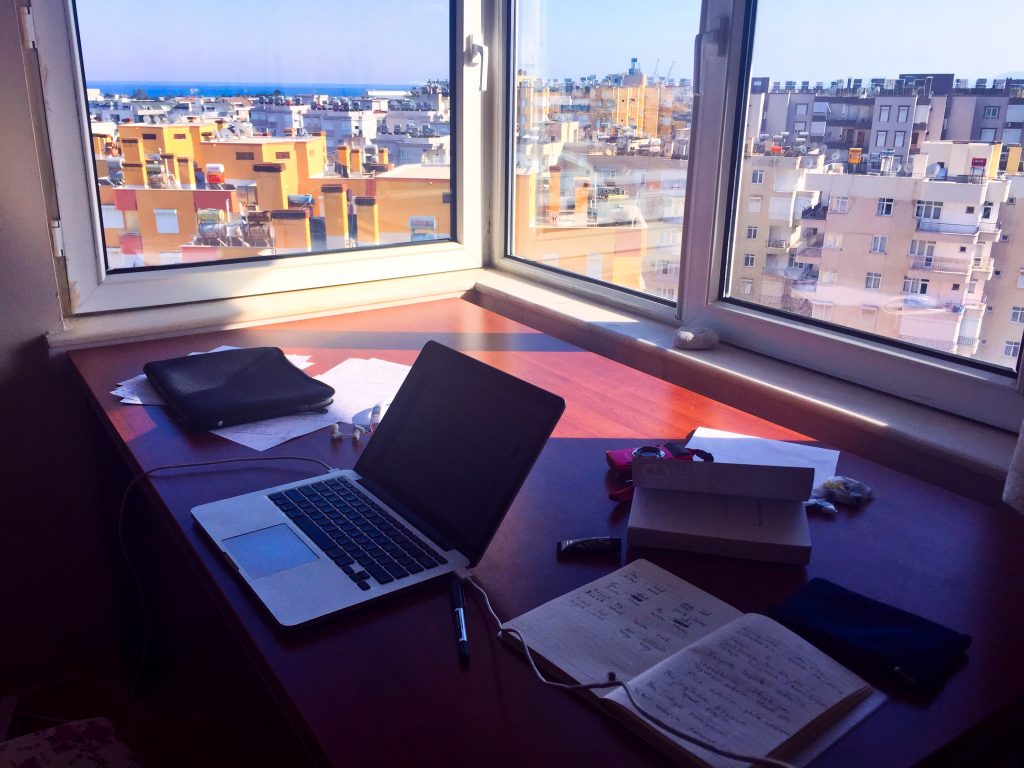 I stay at the apartment where I get to work on my book business. I’m drafting a new novel and running advertising for the existing books. I take the dogs out, go shopping and visit the pool. And every day, I try to spend at least one hour studying Turkish. It’s a tough language, but I am determined. I’ve got apps on all my devices and I listen to vocabulary as I walk the dogs, cook and do dishes, and I practice with Duo Lingo, Babbel, Monday and Memrise. The language is unlike any I’ve learned before and Wayne teases me about my fascination with the grammar and structure of the language, but I will be able to speak by Christmas. Maybe. 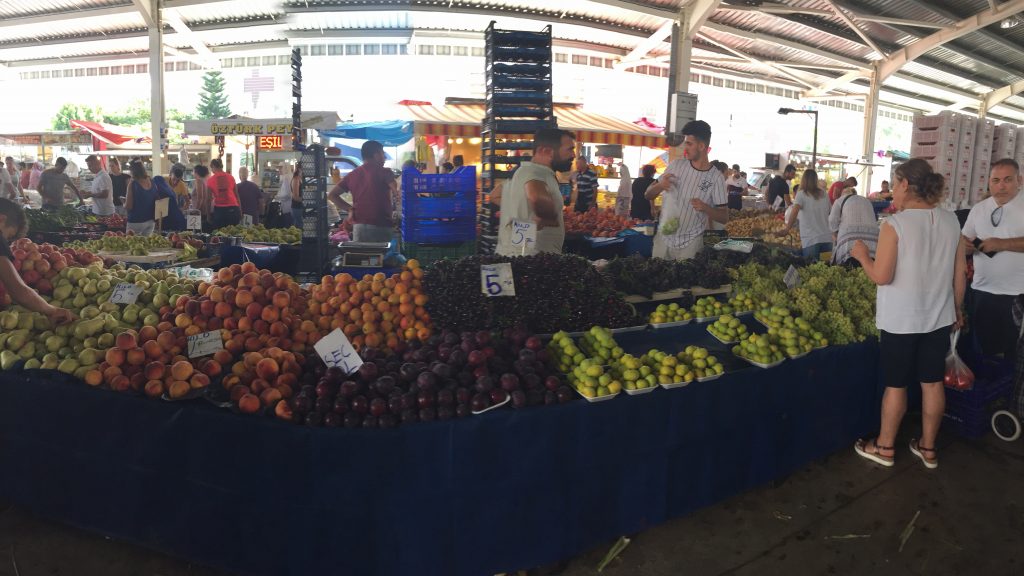 Every Tuesday, there is a neighborhood market selling fresh fruits and vegetables, cheese, eggs, fish, olives, dried fruits and nuts, and various household goods. I take my little rolling trolly just like the other Turkish housewives and walk the few block to fill my shopping cart with all the healthy makings of our Mediterranean diet. The market spills out of the main structure and for two blocks on every side street, people are selling honey or homemade yogurt or bath towels and T-shirts out of the trunks of their cars. We eat what’s in season, so we were enjoying the winter squash and Brussel sprouts back in March, and now it is all about peaches, cherries, grapes, melons, and figs. There are so many different types of peppers, I can’t keep track, but surprisingly few of them are very hot. And tomatoes, a staple of Turkish cuisine, come in every size, color and shape. 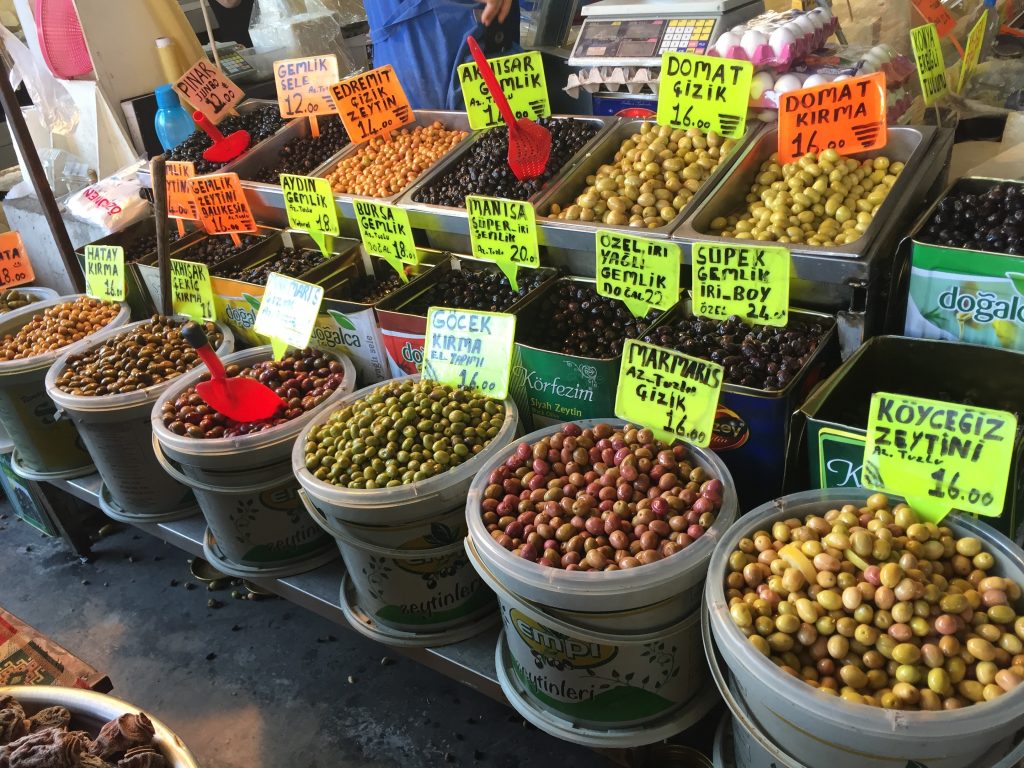 I look forward to my Tuesday market days as the place is crowded and loud and wild, but loads of fun. The men are always shouting and joking, the Turkish ladies are squeezing the produce with a skeptical look, and the tourists are wandering around showing the whites of their eyes. The fish vendor is also the waiter at our neighborhood restaurant and the young man at one of the olive booths always practices his English with me. The prices you will see in the photos of the market are in Turkish Lira per kilo, and today the TL trades at about six to the USD. It’s hard to beat a kilo of fresh cherries for about 85 cents. 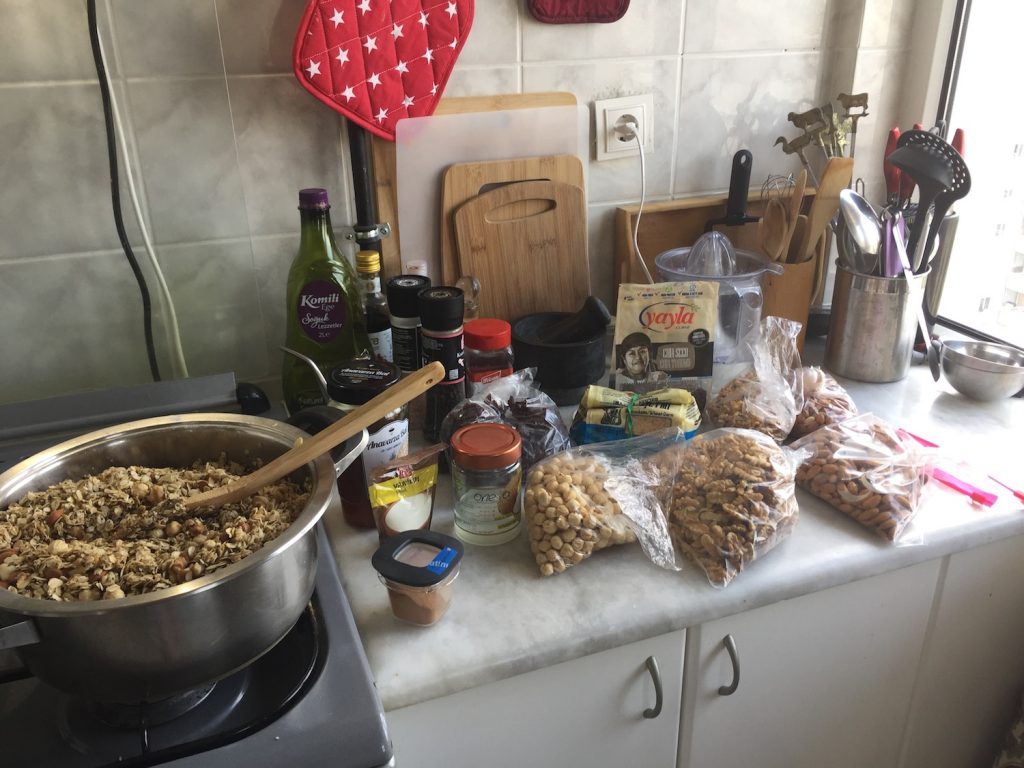 Because there is so much good inexpensive food here, we eat very little processed food. I have even taken to making my own granola cereal. I use oats, coconut oil, Turkish honey, and walnuts, hazel nuts, almonds, chia, dried cranberries and whatever else I can find at the market. Bake it in the oven to crisp it up and with sliced peaches on top, it’s yummy. 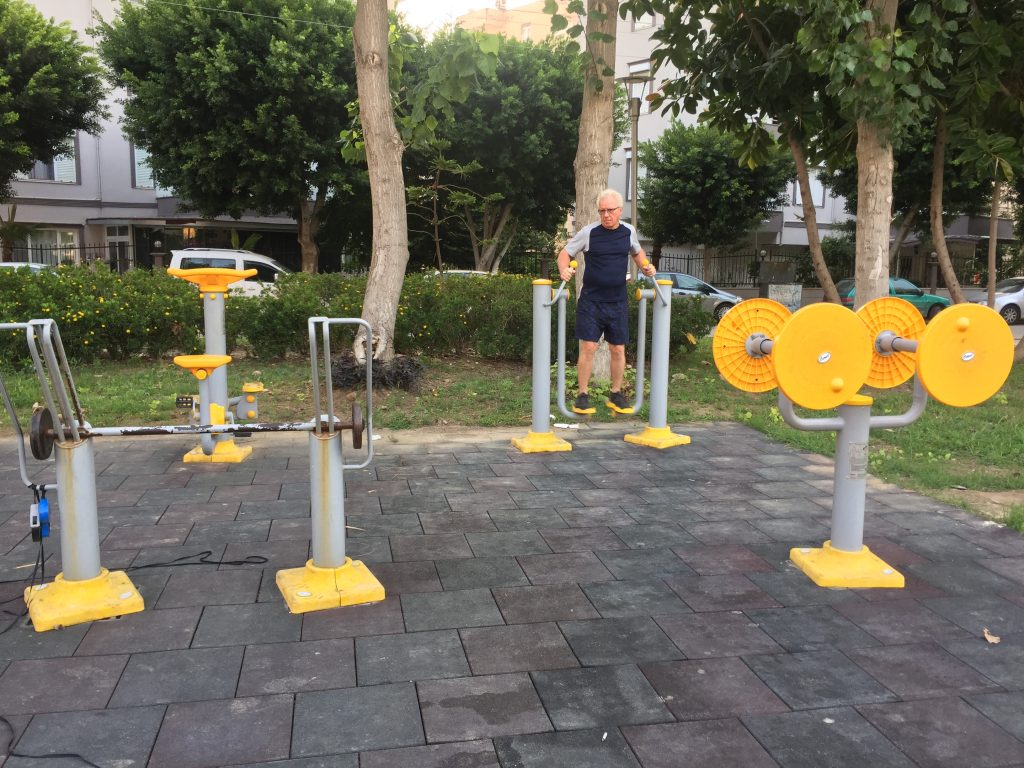 All over Antalya, there are loads of small neighborhood parks, and most of them have playgrounds for the kids and exercise equipment for the adults. With all the good Turkish food here, and no longer living a boating lifestyle, we found our waistlines growing. Back in May, we decided we had to do something about it. We don’t see too many people using the equipment, but for the last three months, we have been getting up at 6:00 a.m. and spending about 60 minutes working out. We take the dogs for their morning walk around the block and we stop at the park for our workout. I had been noticing so much loss of strength in the last few years, and I didn’t think I would ever get it back. Surprise! I’m feeling stronger and healthier than ever.

Since we are going to be living here for a long time, we haven’t been in a rush to see all the sites, but in six months we have managed to get out and about a bit. 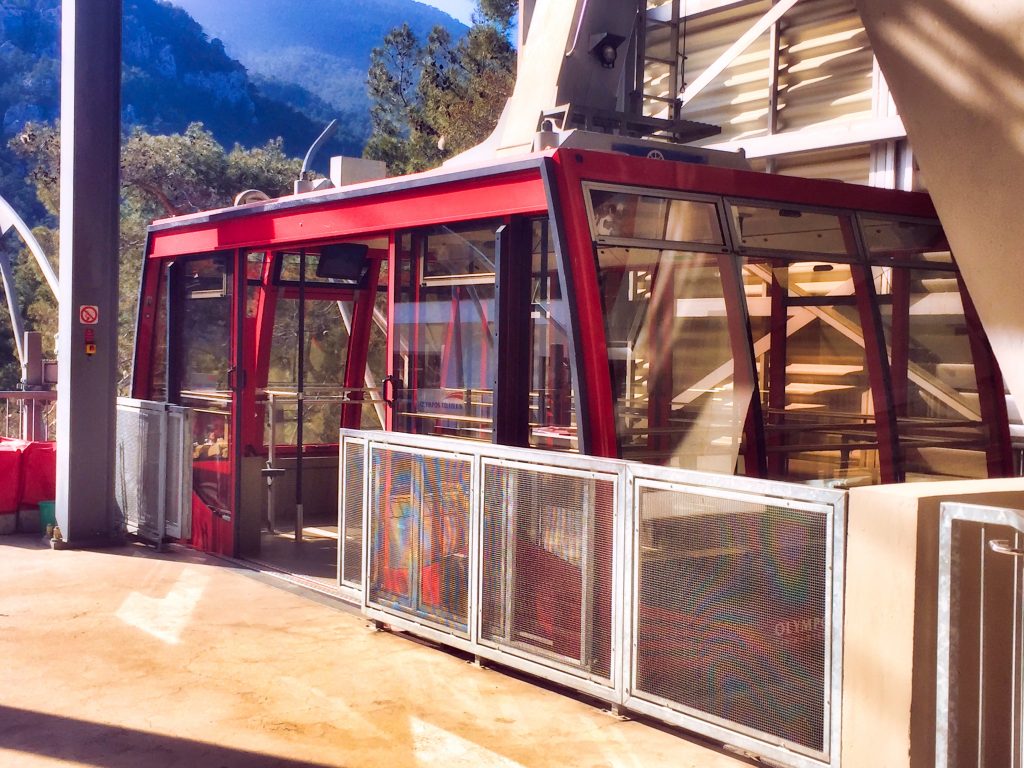 In March, for my birthday, Wayne took me to the top of Mount Olympus Teleferik(Tahtali mountain) via the cable car.

The temperature outside the car as we drove the seaside road past Kemer was in the 70’s. We drove up through a fragrant forest to the cable car base, and after a long ride in the cable car, we found ourselves in snow at 2365 meters height. The views were stunning and the whole cable car structure was a feat of engineering. 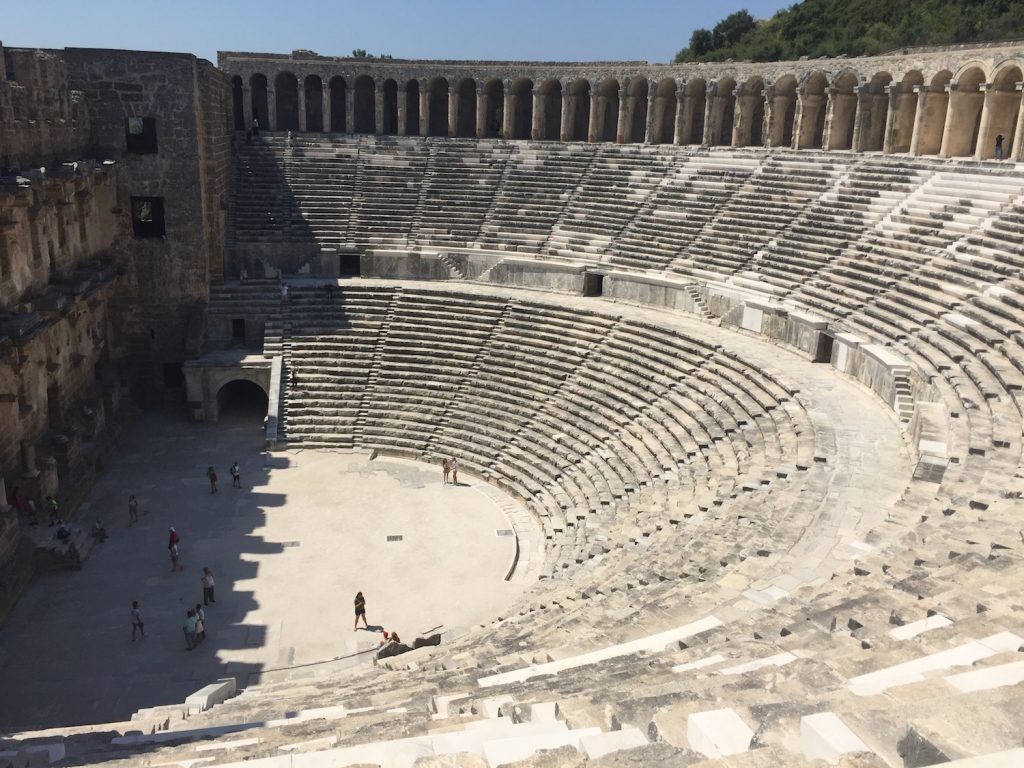 In late June, friends aboard an American cruising sailboat, Chuck and Patty on Soulmates came through Antalya on their cruise along Turkey’s southern coast. We shared some meals, and I spent one day showing them around a few of the local sites. We visited the best-preserved Roman theater of the ancient world at Aspendos where they still hold performances since Ataturk had the theater restored in the 1930’s. 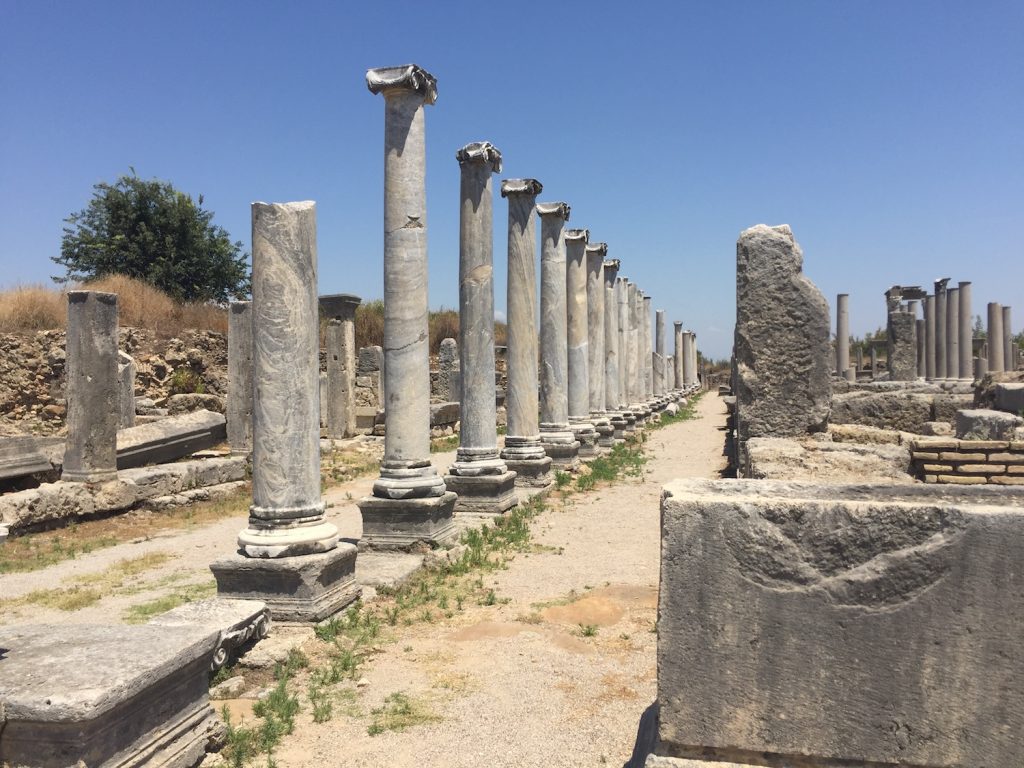 We also stopped to see the ruins of the huge Hellenistic city at Perge built in the 2nd century BC with its baths and market and stadium. The volume of archeological sites within a day’s drive of our apartment is stunning. And they are continuing to find more. People have been living in this area for thousands of years through dozens of different cultures and civilizations. 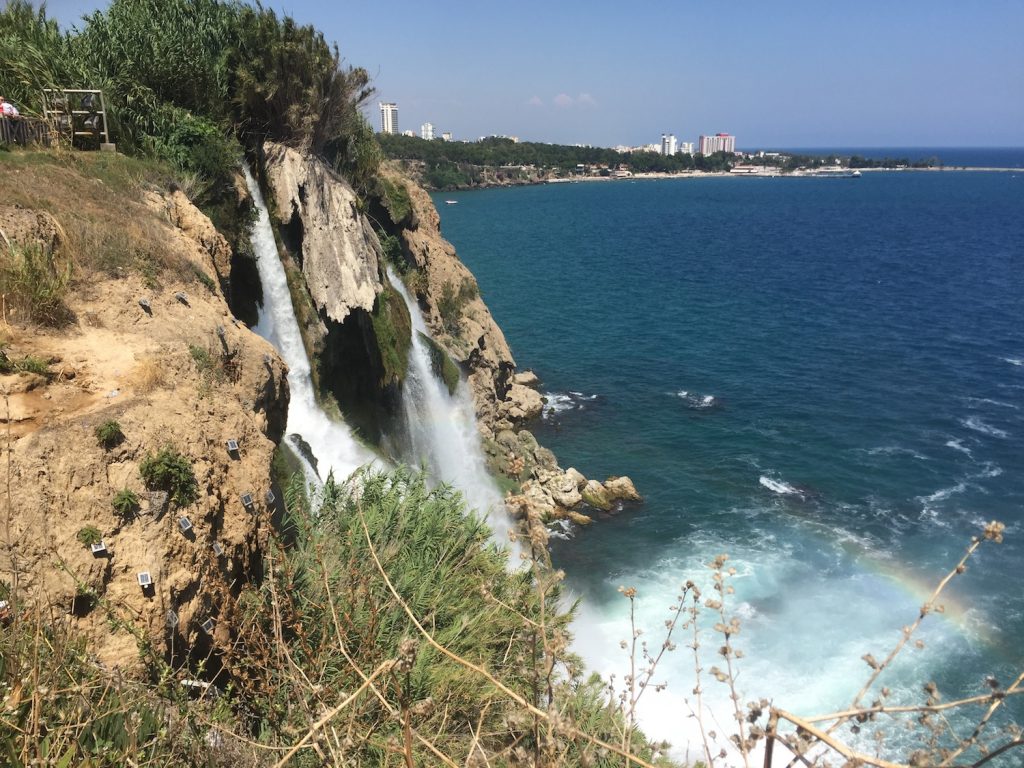 Finally, we stopped off at the Duden falls park right here in the city of Antalya where a waterfall drops into the sea. We ate a late lunch at a restaurant along the river and watched the guys taking rafts up the river so folks could do a mini raft trip down this stream. It’s a good thing they have a good net at the end. You wouldn’t want your raft to go over these falls!

Recently, we also got the chance to go up on our local Antalya cable car with our friends, Baris and Dinçer Dinç, the brothers who are the owners and the brains behind Naval Yachts. Though the climb was not as high as Mount Olympos, the views of the city we have come to call home were stunning. From the marina, the port and the Free Zone in the foreground, to the miles-long Konyalti Beach along the shore, you can see why Antalya is a favorite for us as well as tourists.

We ate gözleme and talked of travel, family and politics. And we had the opportunity to talk about what the impact of the drop in value of the Turkish lira is having on the average Turkish citizen. They explained that in the marine business, almost all prices now are quoted in US dollars (such as our contract). They also said that as employers, they try to help their workers with bonuses to make up for the loss of buying power. And while we haven’t really seen prices change much at the market, the supermarkets, or even at the gas pump, inflation is coming. Right now, Antalya is brimming with foreign tourists, and people here are not perhaps feeling the impact yet, but when the customers have gone and the city returns to the sleepy town we saw last winter, things are going to get tough for some of these folks. Yet, not once in all my time here in Antalya has anyone ever made me feel unwelcome when they found out I was American. They have reason to. I know Turkey has had economic difficulties for some time now, it’s not new.  But there is no doubt that the severe drop in the lira one week ago was brought on by the war of words between the USA and Turkey. In spite of that, I have been treated with nothing but courtesy, kindness and respect.

And I often don’t get that back in the USA! Is it any wonder we are loving life in Turkey?