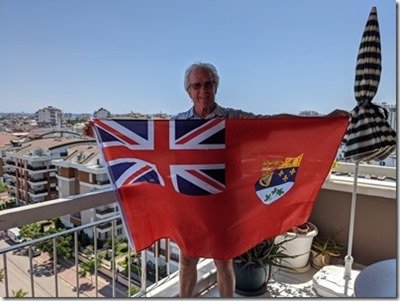 As you will soon see, Summer is not the only thing that is officially here.  Captain Christine has now officially registered XPM78-01 Möbius with the Jersey Ships Registry in the island Port of Jersey and I can’t resist the chance to start off this week’s update with this riddle:

Can you find the TWO Canadian’s in this photo?While you ponder that question and search the photo above for that missing 2nd Canadian, a few more details on our choosing to register our new boat/home Möbius in Jersey which should provide you with a few more clues to solve the riddle above.

OK, all very interesting Wayne but WHY register Möbius in Jersey?

OK, back to the riddle.  Did you find the second Canadian in this photo?

The second Canadian is the flag!

You would have to know your flag history MUCH better than I do to have spotted this, but the flag I am holding is the Canadian Red Ensign used from 1921 to 1965 ……

…… until the current Red Maple Leaf flag was adopted in 1965.[1] The Maple Leaf flag also replaced the Canadian Red Ensign as the civil ensign of the country.Way more than you ever wanted to know about Canadian flags I’m sure but for Christine, who came up with the whole idea,  and I this is the perfect Goldilocks just right flag for us to sail under on Möbius.

Getting back to where I started this latest tangent, to complete the formal registration of XPM78-01 Möbius in the Bailiwick of Jersey we needed to send them photos to prove that we had “marked and carved” as it is officially called, the transom of the boat with the correct sized and placed letters of the boat’s name and Port of Registration.

Earlier in the week Christine rode her bicycle over to a printer she had discovered last year and they printed out a set of vinyl self adhesive Black block letters of Möbius  and Jersey.

Meanwhile, I did a quick layout of our Official Number and Gross Tonnage on a piece of 5mm aluminium plate to be my guide as I used my fabulous little Milwaukee cordless router to carve these numbers.

I gave it a quick sand blast, painted over all the numbers with some Black spray paint and then sanded the surface to reveal just the numbers.

Asper the requirements of the Jersey Ship’s Registry, “the official number and the tonnage calculation should be permanently carved or marked on a small plaque which should be fixed onto the main beam or on a readily accessible visible permanent part of the structure inside the vessel.  A plaque is usually approximately 20cms x 10cms and should contain the official number and tonnage figure.”And there you go XPM78-01 Möbius is officially ship # 749887.

On her weekly Friday inspection Christine brought along the vinyl letters and while everyone else was at lunch we carefully laid out and applied the letters on the Aft Transom.

These vinyl letters are just a temporary stand in while we await the arrival of the CNC waterjet cut aluminium letters but were enough for us to take the required pictures to send to the Port of Jersey Registrar.

In my youth I once had a job putting decals and lettering on semi trailer tankers so I knew the trick about spraying the surface with some water and dishwashing liquid so you can float the letters onto the aluminium plate and still adjust their position to line each one just right and we soon had the job done.

We called in some cheap labour to do a bit of final cleanup.

And soon had our boat all officially named and ready for some photos to prove it.

First photos we needed are to prove the height of the letters of the boat name and at 160mm/6” tall we are well above the minimum 100mm requirement and that’s all the photos we needed and Christine has sent these on their way to Jersey and they will mail us the official paper Registration document.

With the stern of Möbius backed up against the aft wall of the shipyard it wasn’t easy to get a shot from the rear like this but I managed to climb up onto a little ledge on the wall and squeeze off this shot to send to the Jersey officials.

Lucky me; in my eyes and heart I’ve got the most Beautiful Bride AND the most beautiful Boat there is!

Our new “baby” is born!  Please join us in welcoming XPM78-01 Möbius to the world.

Displacing a mere 66.83 Gross Tons, little # 749887 in the British Ships Registry and our newest boat and home has officially arrived.

Did I happen to mention that this is an eXciting new milestone for both of us?!!