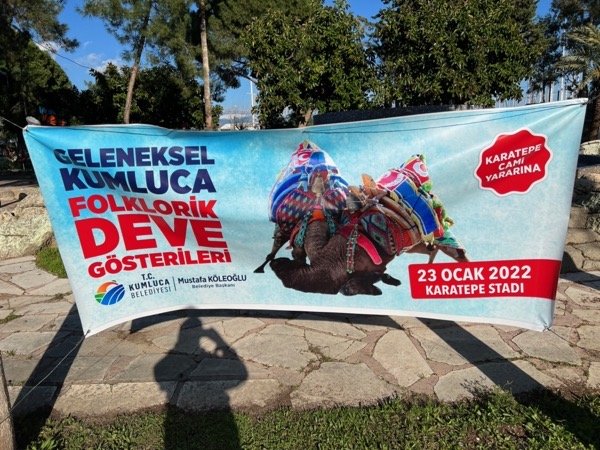 Christine here, guys. Yes, I know. Wayne did not have time to write a blog on Sunday, and it was my fault. You see, Sunday, January 23rd was Wayne’s birthday. It’s really hard to figure out what to get him for his birthday. At this point in our lives, we don’t really need more stuff, so we decided recently to try to simply give each other experiences. My first plan (which sadly got thwarted) was a pretty good one, I thought. On one of my daily walks, I came upon this banner strung up between a couple of trees. What were the odds? They were going to have Turkish Camel Wrestling in the next town over on January 23, Wayne’s birthday.

Camels were used as an important form of transportation in this Antalya region where we live for over 1000 years and up until about 50 years ago. They were important in the Ottoman Empire and a big part of the Turkish culture. Today, they have these festivals where they dress up the animals in these fantastic costumes and they have them “wrestle.” Essentially, they try to get the males to do what they might do in the wild, which is to fight over a female, so they parade a female camel (who is in heat) before a pair of males which makes them start foaming at the mouth, and then they go into the ring and “fight” for the female. Usually, after a bit of jostling, the loser runs away. I think it sounds fascinating and I am dying to go before we leave Turkey!  If you are interested in seeing a video of a camel wrestling event click here. However, the whole event got cancelled due to the weather getting down to freezing. With nowhere to house the camels locally overnight, the event has been postponed. So, there I was with a rented car for Wayne’s birthday, and I needed to do a fast change of plans. 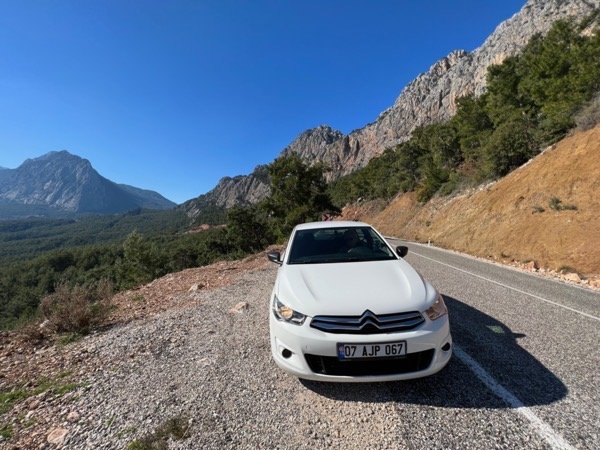 I understand that people who have to commute to work, don’t think that driving is much fun, but when you don’t own a car, having one for a day does become a sort of a treat. And I know Wayne loves to drive, especially on curving mountain roads, and we had ourselves a little standard 5-speed diesel Citroen. 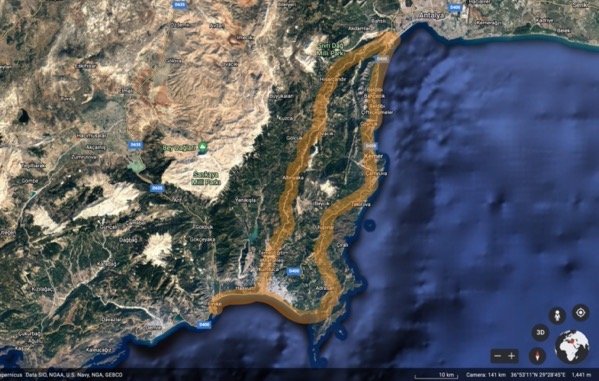 We also were out of coffee and a few other more exotic provisions, so a trip to the “Big City” of Antalya was in order. I opened Google maps. Our route is highlighted in orange above. We normally drive to town on the route called the D400 which more or less follows the coastline and that is the way we came home (more or less). However, I noticed this tiny curvy road inland, and while I was a bit worried about how high it might take us given the snow level on the mountains, I decided we’d give it a go. Finike Marina is at the bottom where we started out, then we went up through the town of Kumluca and into the mountains. We came out at Antalya and drove back mostly on the D400 with a side trip to Adrasan and Karakoaz before returning home to the marina. It totaled about 275 kilometers. 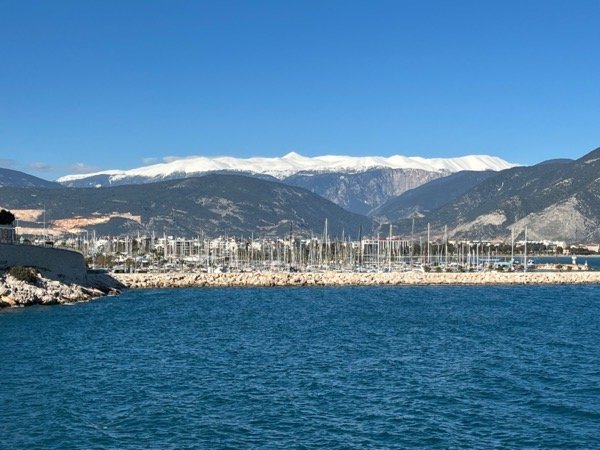 I took this photo of the marina here the last time we had a gorgeous cold, clear day. Since then we had another rainy few days and the snowline had crept lower. Just so you understand my concerns about how high we might get without chains or snow tires. 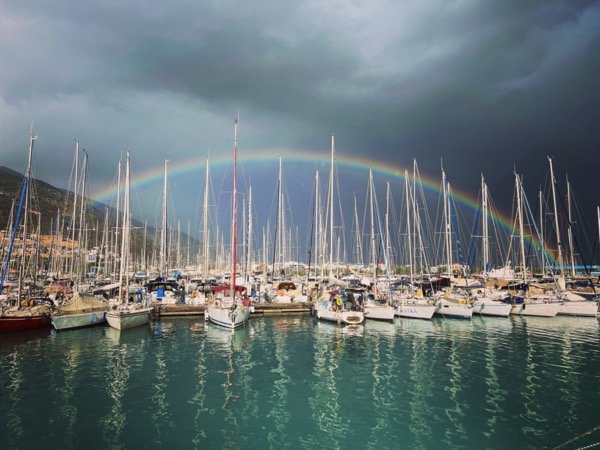 The storms we get here can be pretty fierce and the temperatures lately have been slipping closer to freezing even here on the coast. The snow is creeping lower and lower down the mountains. 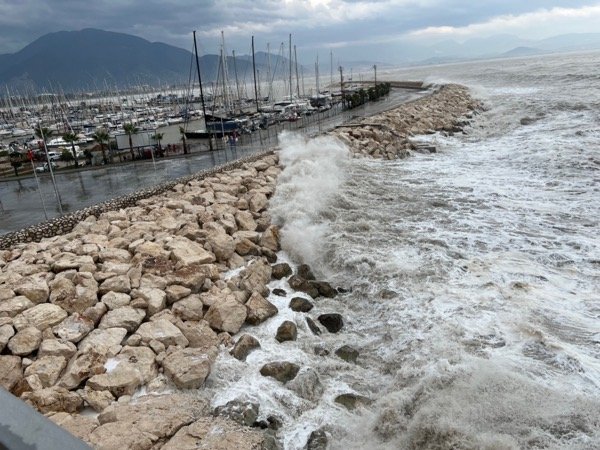 The last time we took our intrepid sea dogs with us on a curvy coastal road, our darling Yorkshire Terror, Barney, suffered a bout of motion sickness (he who has crossed the equator and sailed to New Zealand) and puked all over the back seat of the last rental car, so we decided this would be an Adults Only trip. 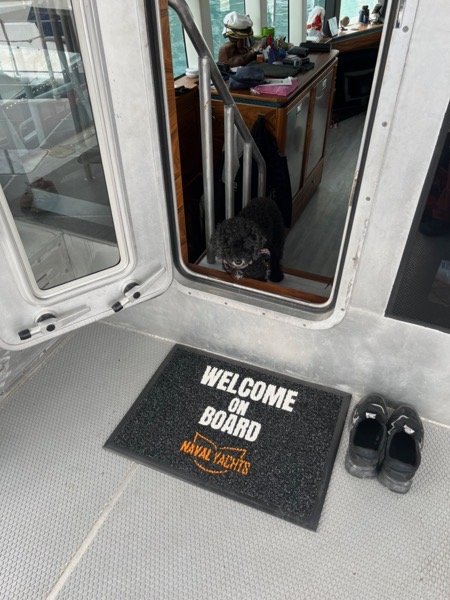 So on Sunday, we closed the door on the pups assuring their safety inside the boat and climbed into the car for our drive up into the mountains. The weather was spectacular to start with a clear and cloud-less blue sky. 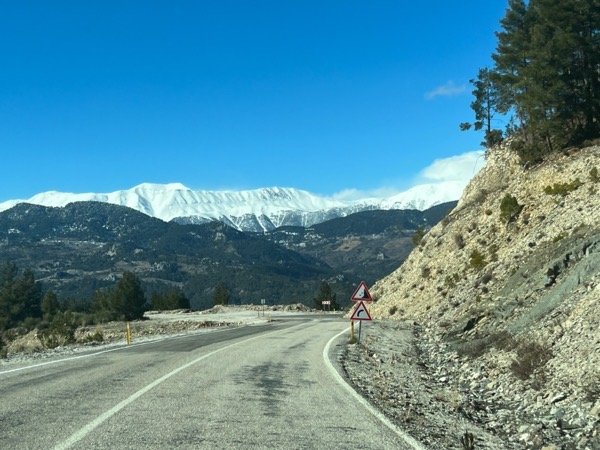 The tallest peaks of the Taurus Mountain range were off to our left as he wove our way over this pass through the lower mountains. Sometimes the road got so narrow, there was only space for one car. When we started out that morning down at sea level, the temperature had been about 6C. Lots of people have a stereotype in their minds when they think of Turkey. They think about camels and desert. Turkey also has amazing mountains and pine forests. 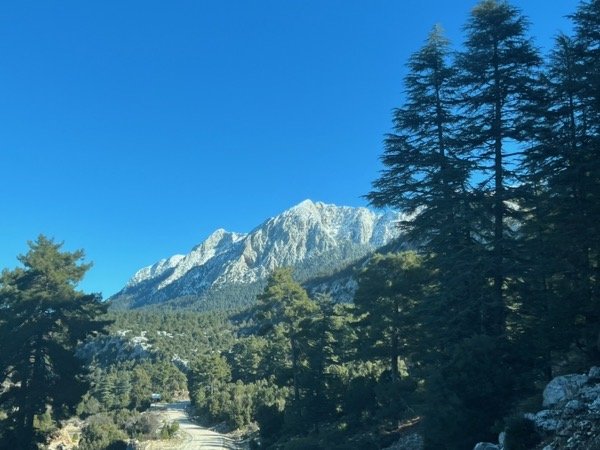 As we climbed upwards closer and closer to the lower snowy peaks, the trees grew taller and the temperature started slowly dropping. 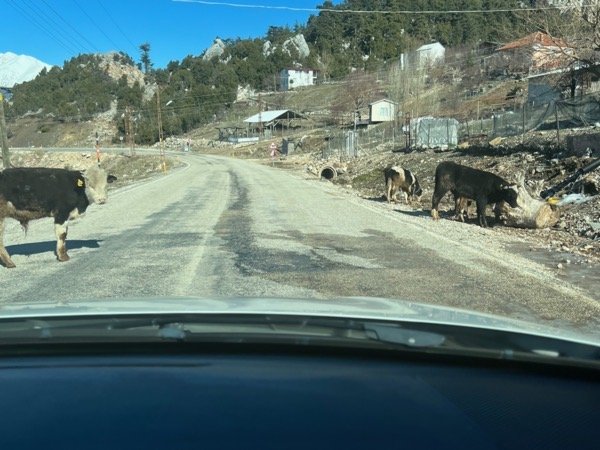 I was actually surprised at the number of villages we passed, and the many small farms that dotted the mountains. The cows scrambled up and down the mountains almost like goats, but they generally seemed to prefer walking on the road. 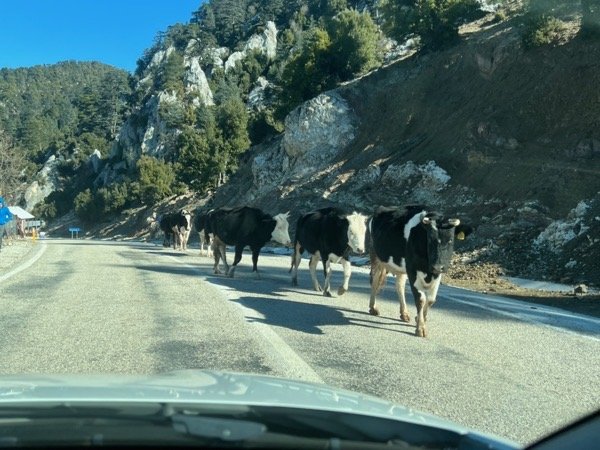 As we climbed higher, we got closer and closer to the snow. After passing through the village of Altinyaka, there were signs posted saying you had to have snow tires to go any further. Ha! We don’t need no snow tires. We have a Canadian driver! 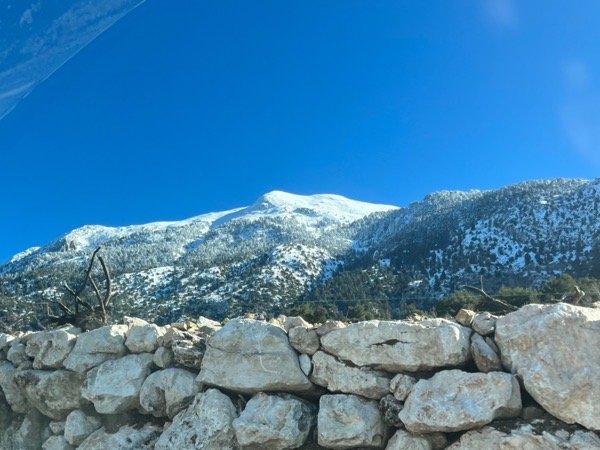 Or so I thought until I started to see how much snow was down close to our road. 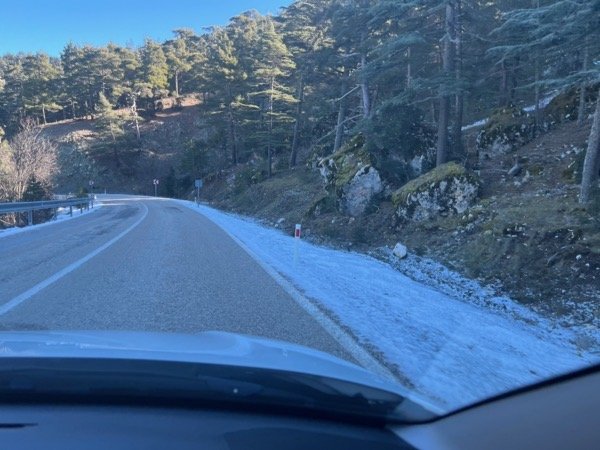 And I checked the car’s thermometer. 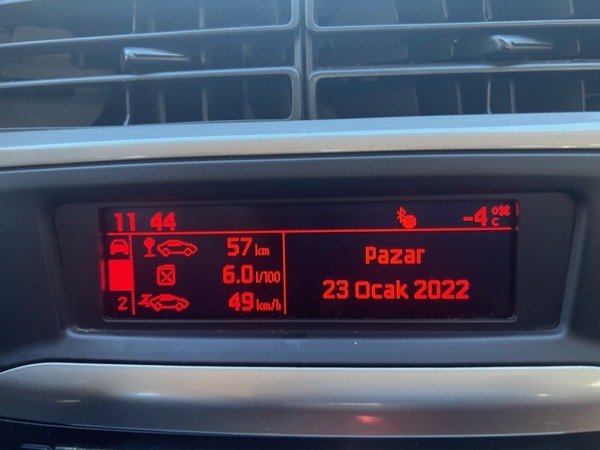 I always get nervous when I start seeing the banded sticks on the sides of the road that will measure the depth of the snow, and show drivers where the road is in the drifts. Fortunately, we never got that high, but I was able to access my iPhone’s altimeter through the iNavX app. 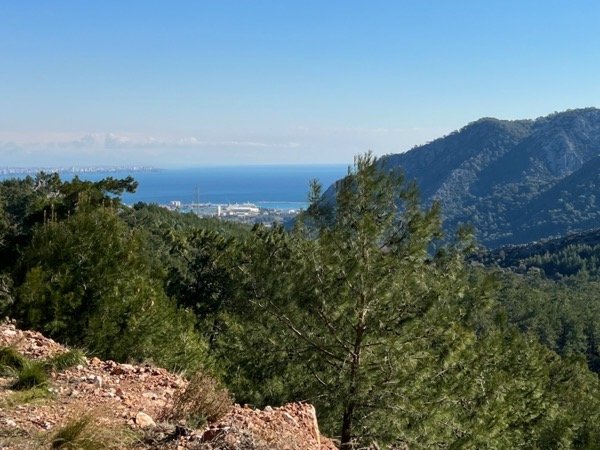 Then we started the descent down the other side into the city of Antalya, our old stomping ground. 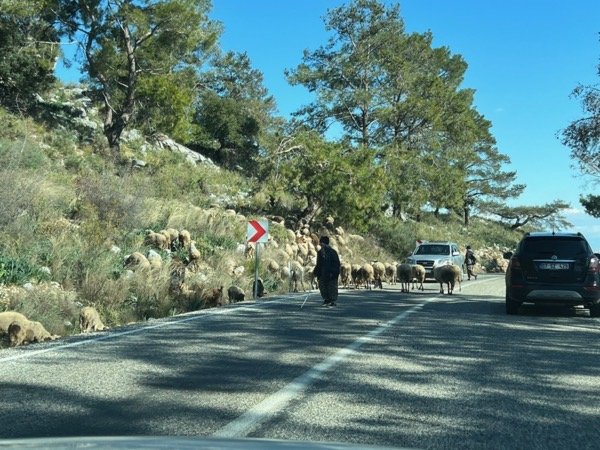 It was goats and sheep crossing the road on the way down. 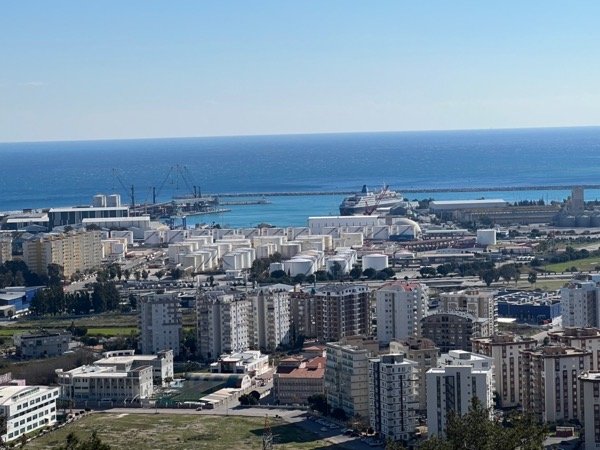 We got a nice bird’s eye view looking down on the port of Antalya. The Free Zone where MÖBIUS was built is on the left side of the harbor, opposite the cruise ship that appears to be parked due to the pandemic. 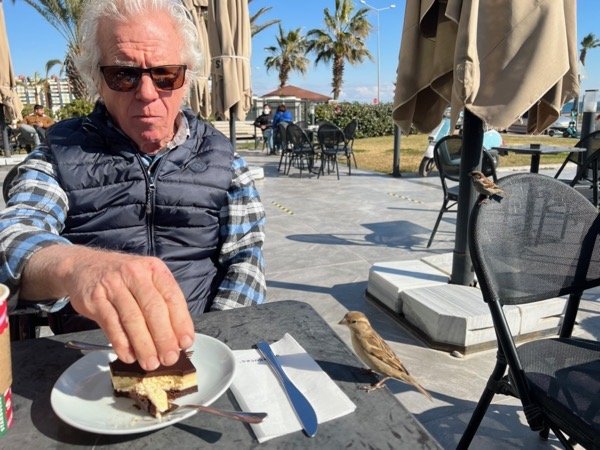 I took the birthday boy to Starbucks for his birthday piece of chocolate brownie cheesecake for which he had to fight an armada of sparrows (and his wife) to get a few bites in. 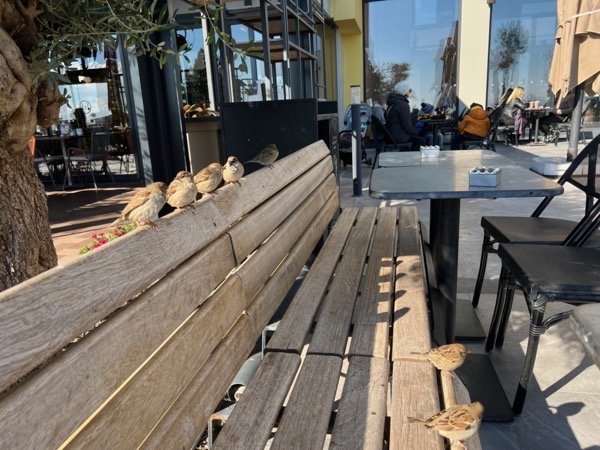 After a nice grocery and wine run, we hopped back into the car and started the drive back home to Finike. 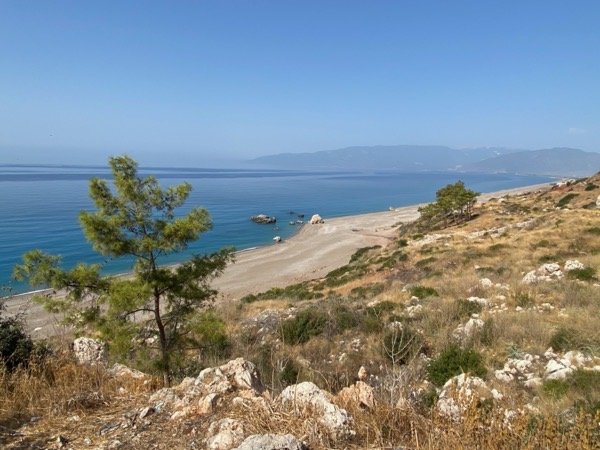 The sun was warm, the Mediterranean was the usual gorgeous blue, and the drive along the coast was almost as much fun as the mountain drive. Sorry to all who were anticipating a Wayne blog, but he deserved to take a day off from all the boat projects.  I promise he will be back soon with more tales of our travails of getting MÖBIUS ready to go to sea. Fair winds! Christine