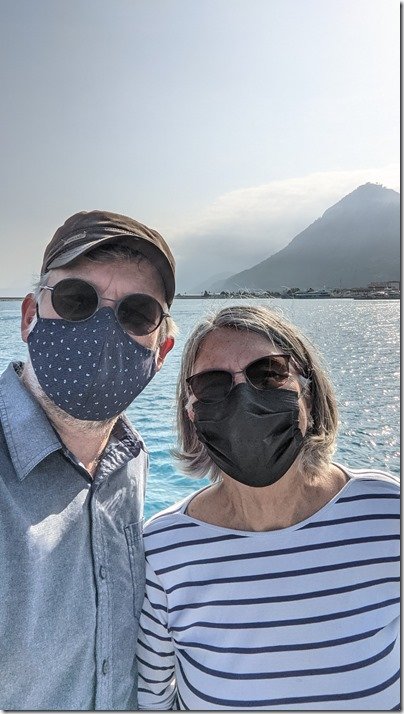 In THIS Progress Update post from February 8-13, I described how we feel like we are living a life that mimics Zeno’s Paradox which asks the question;

If you want to get from Point A to Point B and each step you take is exactly 1/2 the distance between you and Point B, how many steps will it take you to get there?

An infinite number of steps and you will never get all the way there!

However, the most important thing is that forward progress was made again this week, including two very exciting even though it too ended up being one of those half way steps.  But half steps are still steps forward so we’ll take every one we can.  The commissioning phase continued this week as we power up and test all our many systems and start shaking all the gremlins, both large and small, out into the open so we can deal with them.  As you might imagine this often feels like we are playing the marine version of Whack-A-Mole as we get rid of one gremlin and two more pop up.  The major systems we are currently bringing up to speed include the Kabola diesel boiler, the Furuno navigation system, Maretron monitoring system, Domestic Hot Water DHW system and the CPP pitch control system, to name but a few.  None of this testing and problem solving creates very visual or entertaining content so again this week you get a reprieve from my typically much longer blog post so do enjoy this calm before the next storm of activity begins and let’s jump right into the week that was April 5-9, 2021.

The biggest and best First this week by far, was the arrival of our dearest friends who flew half way around the world to spend two weeks with us as the Captain of Team Whack-A-Mole.  Now THAT is a friend!

Some of you will recognize this “guest” who is really much more family as we have been friends and fellow sailors for a very long time and Christine and I have the great honour of being the godparents to all four of the children in this awemazing family.

Can you guess who this masked man is? 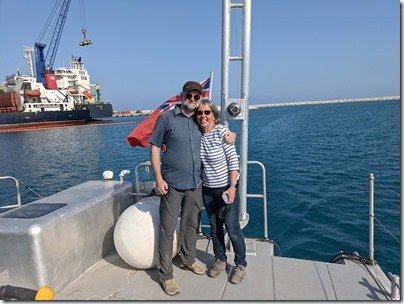 Correct!  John very generously left the rest of his family and flew all the way from Courtney British Columbia to be with us and as you can see from Captain Christine’s huge grin, we are both eXtremely eXcited to have our very first long term guest be such a very dear friend. 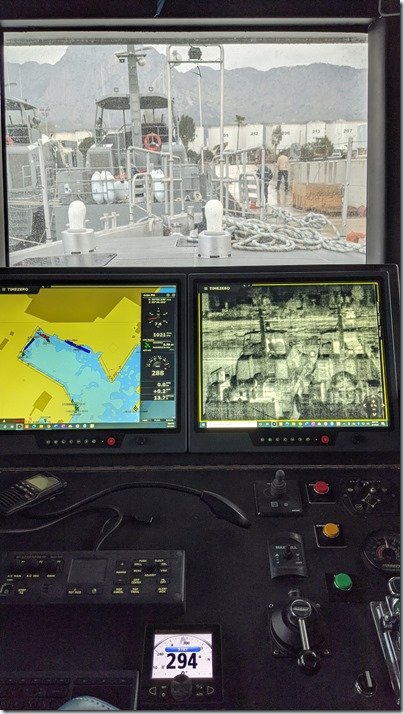 Christine is particularly happy to have John join her in playing Whack-a-Mole with all the electronics systems such as navigation, Radar, AIS, Maretron and more.  John is easily one of THE brightest people I have ever met and when it comes to resolving problems with computer networks and software he is an absolute genius so his plethora of skills has been put to VERY good use this past week.

This photo alone represents many hours of work and generated a LOT of grins onboard when John and Christine were able to get the TimeZero navigation software and the FLIR night vision camera up on both screens at the Main and Upper Helms.

As you can see it is daytime when this shot was taken but it is still fascinating to see how much the FLIR camera augments the reality that you are seeing up at the top looking out the front window at the Main Helm. 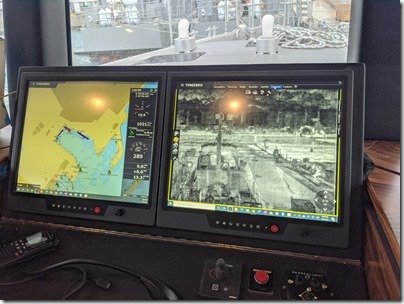 Here is a bit closer view for those interested and click to enlarge any photo to see more.

We will be maximizing John’s talents until he has to fly out at the end of this week on the 15th.  Thanks SO much my friend, we literally could not have built this boat without you! 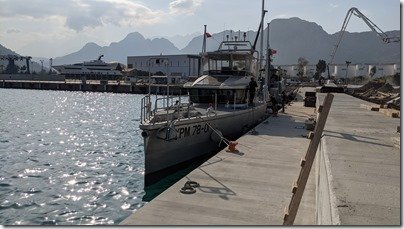 Christine and I have been sleeping aboard Möbius every night since she launched as a safety precaution just in case anything should go wrong with this newborn boat.

And of course we have our two dock mates, these two Police boats which are about to head off to their new home in Oman, to help keep us safe as well. 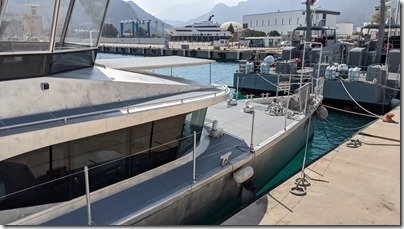 As you can see, Möbius and her two bow buddies are very close friends. 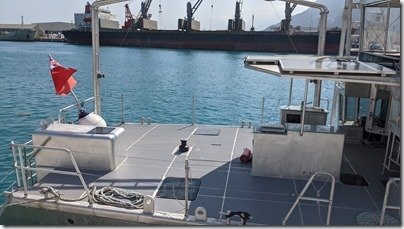 We also have constant entertainment with the various “little” ships like this one that come and go on the other side of the harbour as they get loaded up with goods of all description and move on within two days or so. 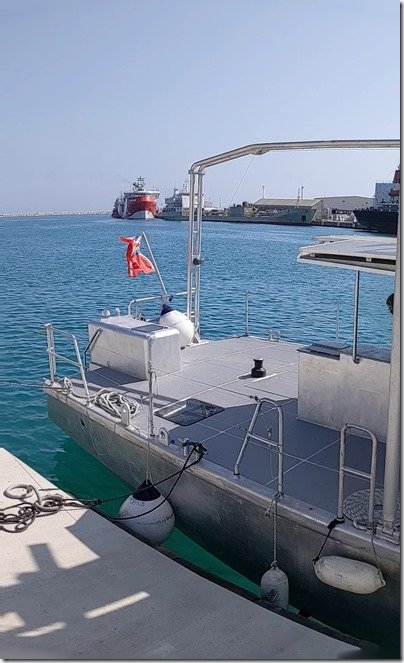 More ships all around us and each one quite unique and very fun to watch and learn.

Since launch we have been gradually moving out of our apartment here in Antalya and onto our new home aboard Möbius and we are now having all our meals onboard and now with John being our first Guest to sleep in the Guest Cabin.  He gives the Guest Cabin two thumbs up and it has been a true treat for Christine and I to be answering all his questions and sharing our eXcitement of our new “baby” with him. 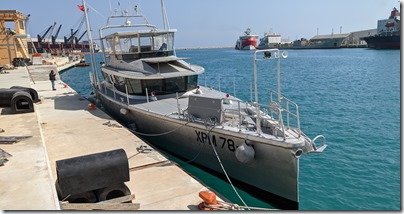 As you can see in this and several of the other photos, the huge renovation of the Antalya Free Zone harbour continues all around us. 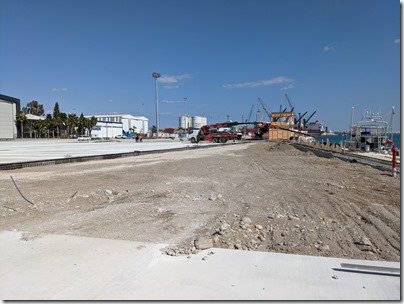 And I do mean ALL around us!

Möbius can just be seen on the very far Right in this shot with the last of the major concrete pours about to go in for the huge superyacht haul out facility they are putting in here. 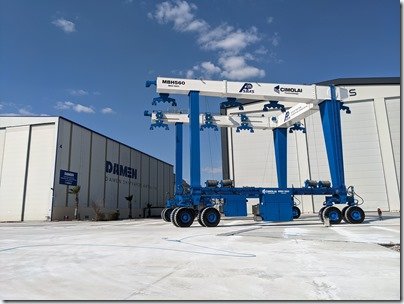 And the Firsts that happened this week were not just onboard Möbius!  We’ve been watching them build this tiny little 560 Tonne TraveLift for the past 2 months and this was her maiden voyage earlier today. 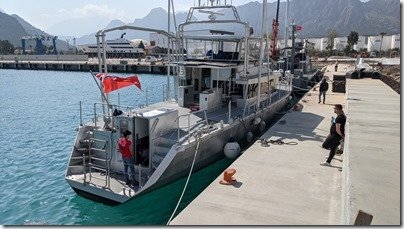 We are now tied up this massive concrete dock that did not exist two weeks ago! 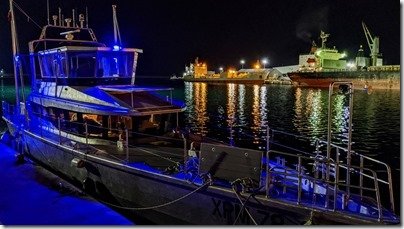 Never a dull moment all day every day here as both construction and ship loading go on 24/7.

You may recall that we had a very unusual wind situation when we were tied up next door at Setur Marina just after we launched which produced some very large swells coming directly into the harbour and marina causing all of us on the outer wall to surge back and forth for most of the day. 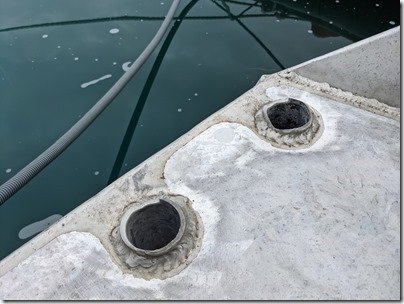 All of the boats beside us suffered multiple snapped lines and ripped out cleats so we were fortunate enough to just have this one ripped off our our Swim Platform.  Gives you an idea of the forces we were dealing with. 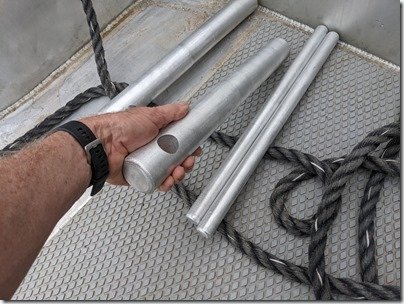 The beauty of aluminium is that even these kinds of breakages are not very difficult to repair and we decided to “upgrade” our cleats from pipe to solid aluminium so we should be able to withstand such situations in the future. 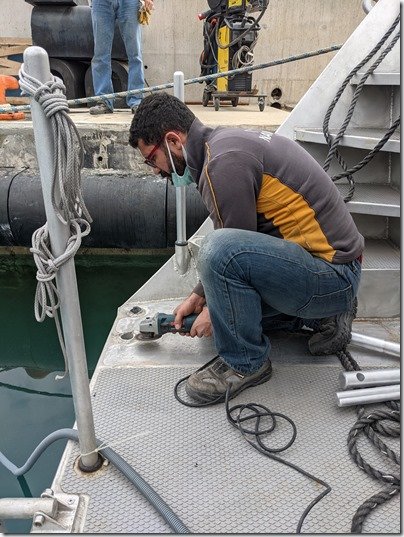 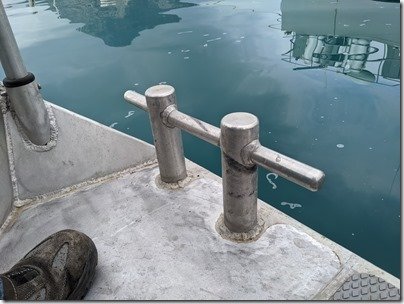 The new and improved cleats are done! 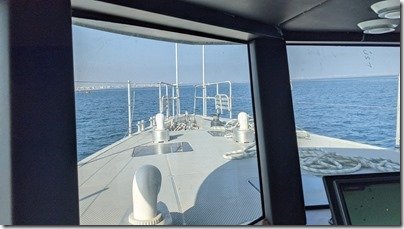 I gave you the best First we had this week right at the beginning with John’s arrival and saved the biggest First for the finale this week which is that we had our first Sea Trial on Tuesday!

Or first half at least. 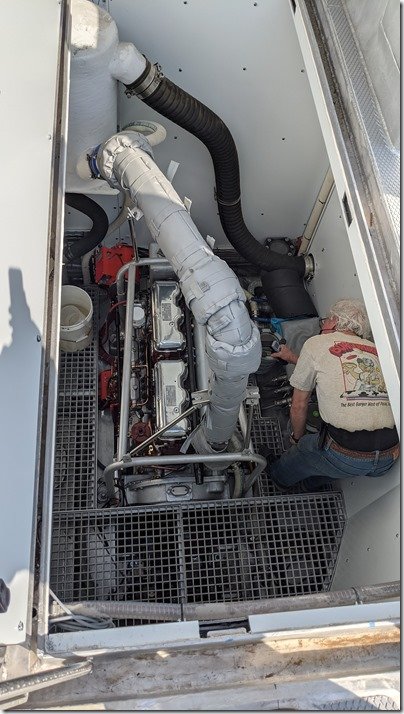 This was my first chance to bring Mr. Gee up to speed and load as we dialed in more and more pitch on the Nogva CPP prop.

We opened up the big hatch overtop of the Engine Room as the paint on Mr. Gee’s exhaust manifold burned in and produced some smoke.

Mr. Gee gave an eXcellent performance and soon had us slicing through the water at just under 10 knots barely breaking a sweat at about 1000 RPM and seemingly not much load.

However, a little bit later we had a sudden loss of oil pressure as it fell from its normal 40 PSI down to 20 so I shut him off to investigate. 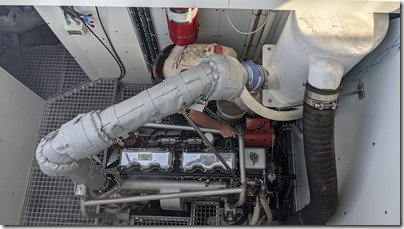 I wasn’t able to find any leaks or other evidence of the problem so we started back up and idled back to the dock.  Hence my reference to this being a half step first sea trial.

I am now busy figuring out what caused the loss in oil pressure and will have more on that for your next week.We were super eXcited to have John be able to join us for our first Sea Trial and he was quite taken with the views and situational awareness that the 360 degrees of glass provides from the lower Main Helm in the SuperSalon.  He shot this little video segment to show you .

The initial portion of the Sea Trial went eXtremely well as we brought Möbius up to just under 10 knots by slowly increasing the pitch on the Nogva CPP prop and Mr. Gee was still loafing along at about 1000 RPM.  Here is a very rough video shot from the Aft Deck when we were doing about 9.6 knots.  My apologies for not having time to edit this into a better quality video but hope you will enjoy coming along for the ride none the less.

** For those wondering, there is a lot of noise during this test run as we have the big overhead Engine Room hatch open as well as the ER door into the Workshop and the WT door into the interior all open.

For those of you who might care, we were also eXtremely happy with the wake we were generating at 9.6 knots and really look forward to the next sea trial when we can bring Möbius up to full speed and find out just what that speed is and what the wake is like at WOT or Wide Open Throttle.  Stay tuned for that in the coming weeks. 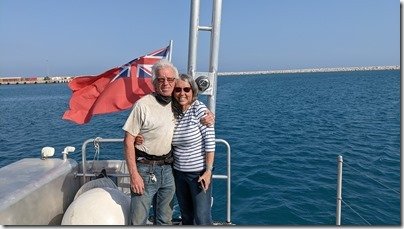 As you can tell, Christine and I are both eXtremely eXcited to reach this new milestone of our first Sea Trial even if it was cut short for now.

Hope you enjoyed this short but sweet Progress Update and please come join us again next week.  And please add any and all comments and questions in the “Join the Discussion” box below.

See you next week,