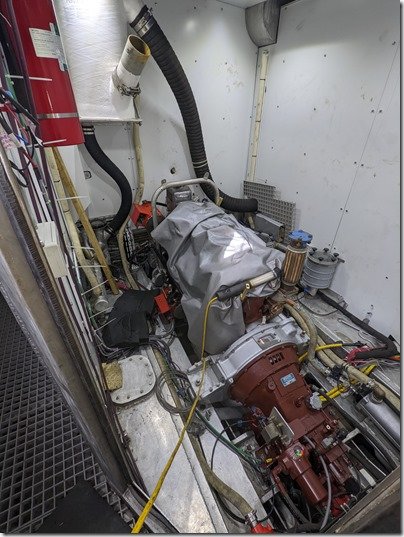 As has been the norm for most updates and perhaps life in general I guess, this will be a mix of good news and bad for all you faithful followers (thanks to you all!)  In the good news column this week’s update will be mercifully short compared to some of the novel length ones I have been writing of late but the related not so good news is that this update will be disappoint all of you who have been anxiously awaiting to see and hear Mr. Gee roar back to his third new lease on life.

The finiteness of time is always the challenge it seems, and especially so on a boat it seems where there are so many things on the To Do list and so little time to get all of them done.  I’m pretty sure most of you have your own version of this dilemma, which is actually a good thing in itself in that who would ever want to have NOTHING left on their To Do list?!?!?  Not me at least.

So this past week has been filled with a litany of To Do list items which too precedent over those in Mr. Gee’s Engine Room (ER) though I certainly did not ignore him completely.

Getting Mr. Gee Ready for Life #3

If you have been following along, here is what things looked like in the ER when I left you in the last Update.  Mr. Gee was back “in bed” with his four “feet” now resting firmly on the wide 25mm thick AL Engine Beds that run down each side of the Engine Bay.  Now came all the “little things” that have to be reconnected, adjusted and tested before he is ready to start.

As many of you can relate to, the “little things” in life can often take most of the time and are of the highest importance and that is very much the case here. 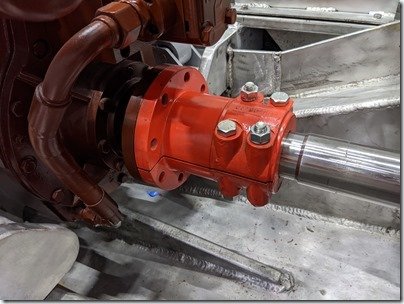 For example, before I can fasten the Mr. Gee’s four feet to the Engine Beds, I need to precisely align these two flanges.  The bright Red one on the Right is attached to the end of the Nogva Prop Shaft and the darker Burgundy on it mates to is the Output flange coming out of the Nogva servo gear box on the far Left. 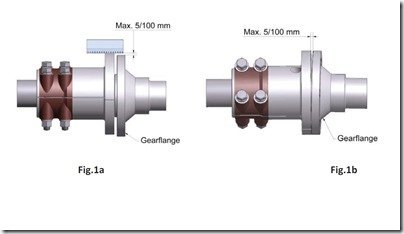 These two flanges must be perfectly aligned axially, meaning both side to side and top to bottom with no more than 5/100th or 0.05mm/0.002”  which for reference is about the thickness of a human hair.To do this, I need to remove the eight hardened bolts which hold the two flanges together, keep the two flanges up against each other and then measure the gap all around where the flanges meet to make sure there is ideally no gap or at least no more than 0.05mm. 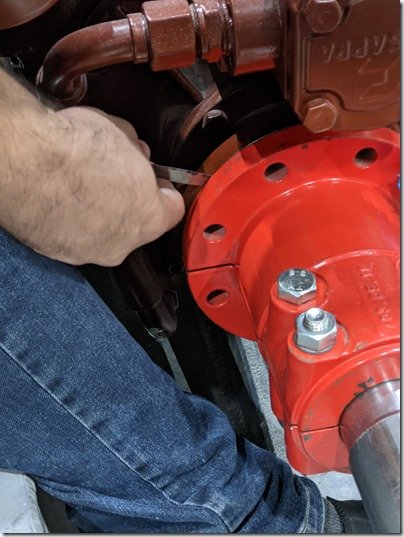 This is done using a feeler gauge you see in my hand here which is a thin piece of steel that is of an exact thickness.  It was close but a bit too big on the Right side (3 O’clock) so I then go up to the front of Mr. Gee and pry his feet over to the Right just a wee bit and go recheck the size of the gap.  If there is a gap top to bottom then you have to use the nuts on the motor mounts to tilt the engine/gearbox assembly to remove the gap. 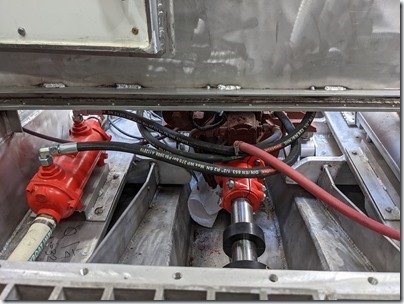 As you might imagine, it takes quite a few trips back and forth to get the two flanges completely flush with each other and once done I could replace the 8 hardened bolts and tighten them down in stages to their final toque of 160 NM/120 FtLbs, which is VERY tight. 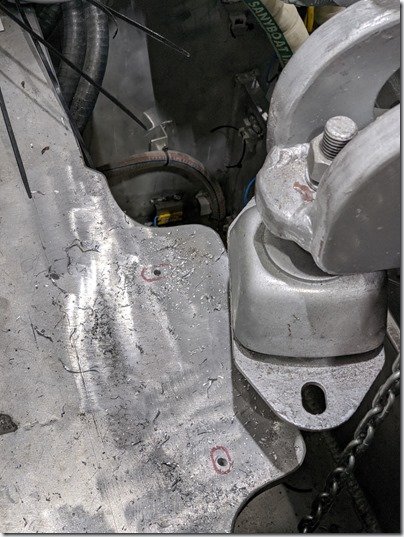 With Mr. Gee & Miss Nogva now perfectly in position, I could install the two hardened bolts in each of his four “feet” and torque these down to the very grunt worthy 225 NM/166 FtLbs.

Note, this is a photo from last year before I had drilled the holes in the Engine Beds so this time I just needed to reinsert the bolts into the existing holes. 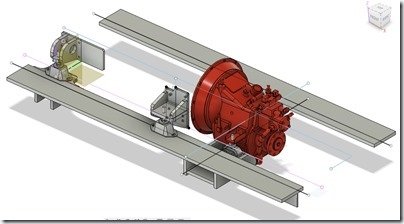 Here is an overview shot from my Fusion 360 screen which is what I used to design all the mounts.  Each side has two feet/mounts for Mr. Gee and one for the Nogva. 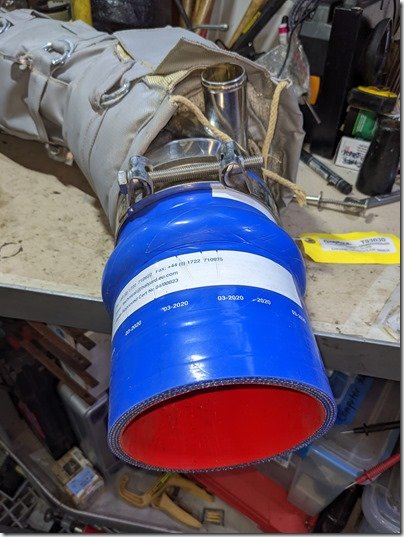 With Mr. Gee now in his final resting spot I could reattach the wet exhaust system.  Wet refers to the fact that sea water is injected into the exhaust gas which removes both noise and heat from the exhaust and allows the use of much easier to handle rubber exhaust hose to take the exhaust gasses out of the boat.

The Blue/Red is special silicone hose where the stainless Mixing Elbow bends downward and mixes the sea water with the exhaust.  The smaller SS pipe you can see pointing up here, is where the hose bringing the sea water attaches. 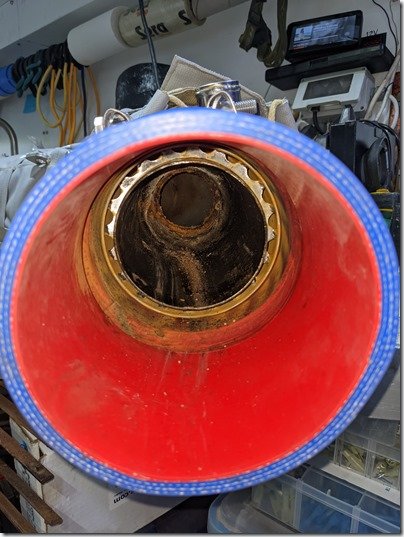 Here is a peek inside the mixing elbow where you can see all the holes around the outer SS circumference where the water sprays evenly into the exhaust gasses. 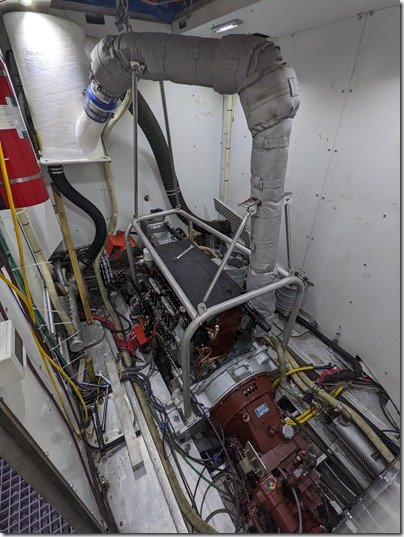 Now I could hoist the whole exhaust pipe assembly into place sliding the Blue silicone hose overtop of the angled input pipe on the large cylindrical Silencer/Separator in the top Separator of the ER.

Once in place I could also reattach the four SS supports which connect the exhaust system to the front and rear roll bars around Mr. Gee.  This has worked out eXtremely well by keeping the exhaust system very tightly in place with no transfer of noise of vibration into the hull it never touches. 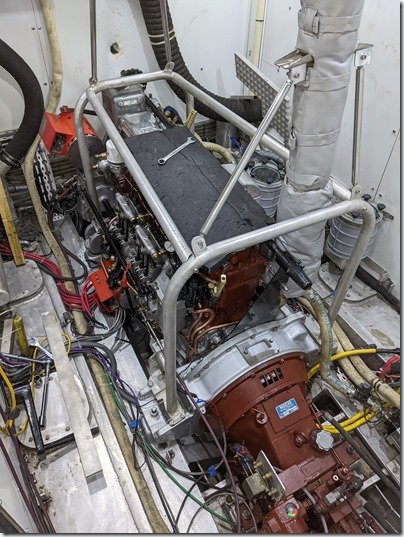 3” SS pipe attaches to the exhaust manifold on the Aft Starboard/Right end of Mr. Gee and then carries the hot exhaust gasses up and over to the SS mixing elbow and into the Silencer/Separator. 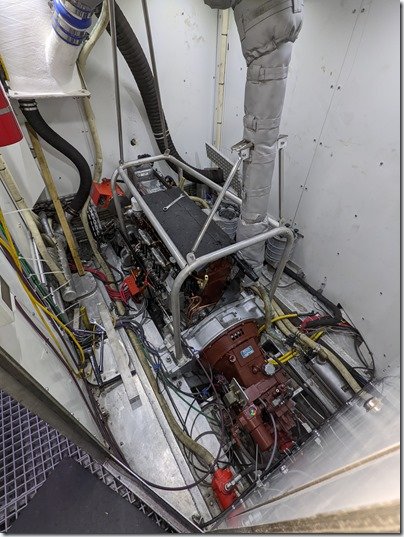 The Black rubber exhaust hose curving down from the Silencer on the Right carries the now cooled and quiet gasses out of the ER and across to the AL exhaust pipe in the hull.

It has proven to be an eXcellent exhaust system; simple, efficient and quiet.  I’ve used a Silencer/Separator combo unit rather than a more traditional “Lift Muffler” as this design has almost no power robbing back pressure and no “sploosh sploosh” as water from lift mufflers create when exhaust and water both exit out the side of the boat. 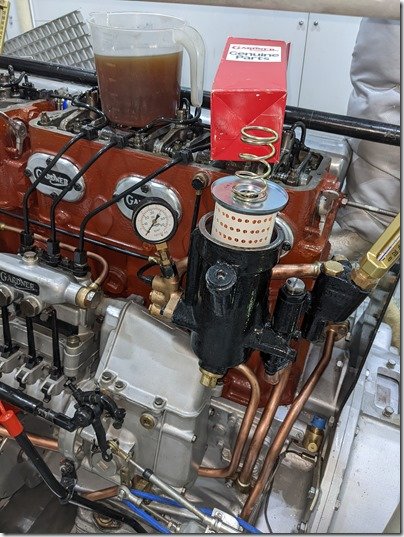 Time at last to install the new oil filter and fill it up with clean new oil. 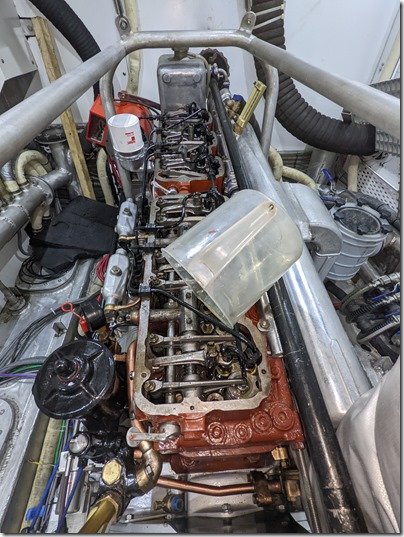 The rest of Mr. Gee’s 28 Liters/ 7.4 USG of engine oil I add by pouring into the two cylinder heads to thoroughly douse all the valves in clean new oil which then drains down to fill up the oil sump/pan. 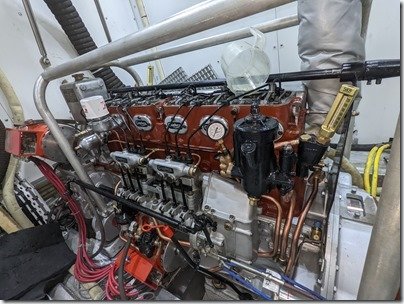 Lots more “little jobs’ such as reconnecting the six large Red cables to each of the two 500 amp Electrodyne alternators you can see on the top and bottom Left side here.

The list of connections is much longer of course and valve clearances need to be set, fuel pump and injectors primed, etc. but each one takes Mr. Gee one step closer to first start up.Unfortunately I ran out of time this week at this point so I will need to leave you hanging here and pick up again next week.

I do my best to “discipline” myself when doing boat jobs to always try to improve on whatever system I’m working on such that it is better than before I started.  Such was the case in completing this latest rebuild of Mr. Gee where I wanted to build and install a much better and safer Engine Control Box. 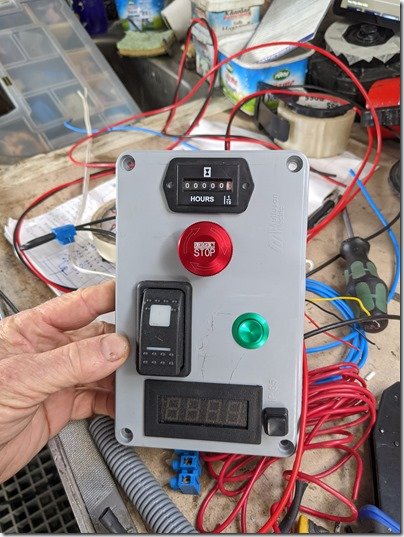 Here is what I came up with.  Quite simple but a bit time consuming to build.  I started with a standard IP65 (waterproof) Grey plastic junction box and cut openings for an Engine Hour meter (top), Red STOP button, power “ignition” switch Left, Green START button Right and digital Tachometer on bottom. 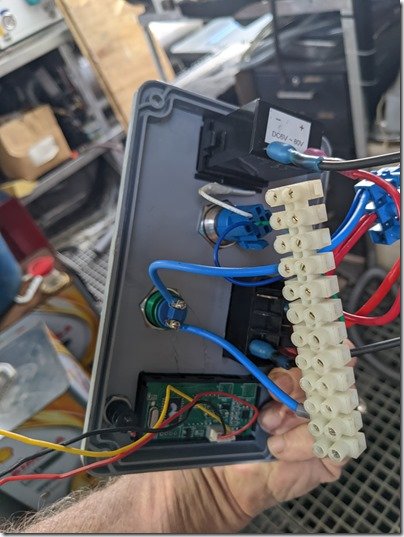 The junction box provided a cool, dry protected spot to make all the connections for these controls so I used these handy junction blocks to make secure connections between all the wires. 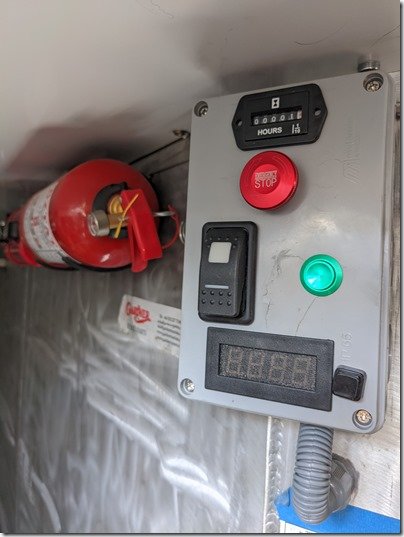 Then I mounted the whole box up high just outside the ER door.

I’ve done my best to reserve the Engine Room to have ONLY the engine inside it;  no other equipment, no batteries, no fuel tanks, etc.  An ER is a great place for the engine but the hotter temperatures and vibration is not so kind to things like batteries, equipment, etc. 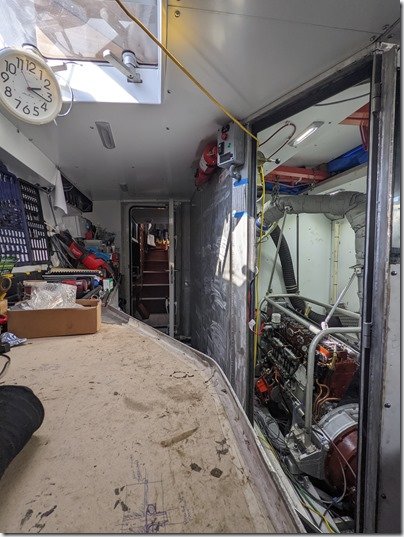 Here is a better shot of the Control Box in the upper center as you look forward down the Port/Left side of the Workshop to the WT door at the far end which separates the Workshop & ER from the interior of the boat.

By mounting this control box outside the ER followed the same thinking and added a safety element in that I could quickly shut down the engine in the unlikely event of seeing a fire inside and not needing to open the ER door. 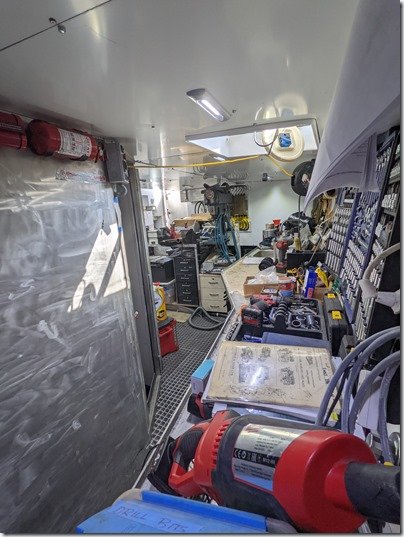 For orientation on how the ER and the new Control Box is mounted, here is the opposite view looking Aft from that WT Door toward the WT door leading out onto the Swim Platform at the far Left end. 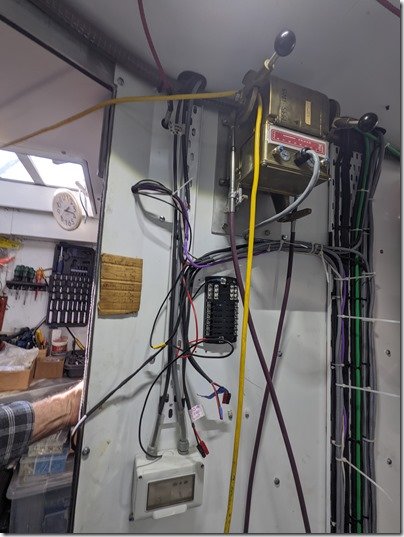 The whole Control Box setup and other wiring is still very much a work in progress as you can see with this perspective from inside the ER looking out through the door on the Left.  In the upper center of this photo you can see how the wires from the Control Box have been led through a hole in the White AlucoBond walls lining the ER.

Off to the right I’ve mounted a new BlueSea junction box which provides me with 12 individually fused connections for each circuit. 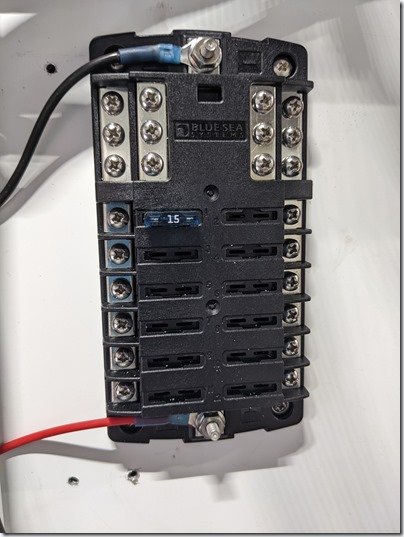 Next week I will be working on making all the connections for circuits such as the Start/Stop solenoids, Sea Water flow alarm, hot water circulation pump from engine to calorifier, engine sensors for pressures and temperatures and connections for the field wires from the alternators to the WakeSpeed 500 remote rectifiers and regulators.

I’ve had great success using these BS junction boxes on previous boats and they do a great job of making secure, neat easily accessed connections and fuses.There were a LOT of other To Do list items commandeering my time this past week but I’ll spare you from all those gory details and leave off here to be continued next week for those of you brave enough to return for more!

My sincere thanks to those who made it to the end of yet another “brief” update from your cub reporter aboard the Good Ship Möbius.  I value all the comments and questions you leave in the “Join the Discussion” box below eXtremely highly so thanks in advance for all those contributions and I hope you will join me here again for continuing adventures as Christine and I work at getting Möbius and ourselves fully sea worthy and ready to throw off the dock lines and head back out to eXplore the world by sea.