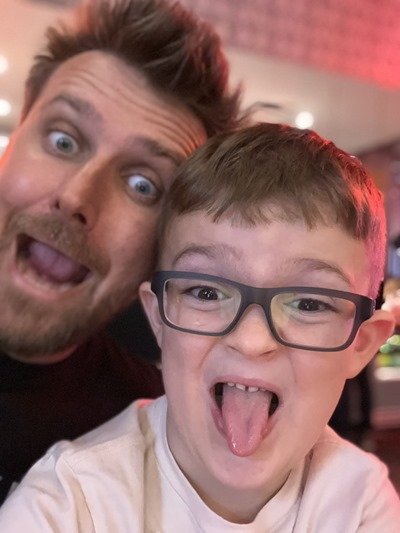 Thanks to Christine and some tech support people at our web host provider, we now have all those technical problems worked out and I am able to post updates again.  Yaaayyyyy!!!

My apologies for any annoyances you may have experienced with the test post and notification Email that went up here on the site instead of posting as a hidden draft only.   I appreciate your patience and happy to be able to post this quick update on what’s been going on aboard the Good Ship Möbius the past two weeks.

Best thing that happened for me last week was that my Captain returned!

As you may recall, back on the 1st of the month, Christine flew over to Miami for some much needed Gramma time with our Grandson Liam, some visits with her family and friends and to look after a few medical appointments.

She had lots of fun outings with Liam, seen here goofing it up with a selfie of him and his Dad, Christine’s son, Tim. 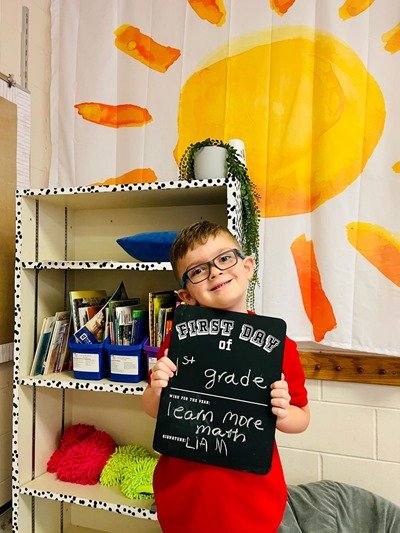 And timing was perfect for Liam’s first day in First Grade.  Yayyyy Liam! 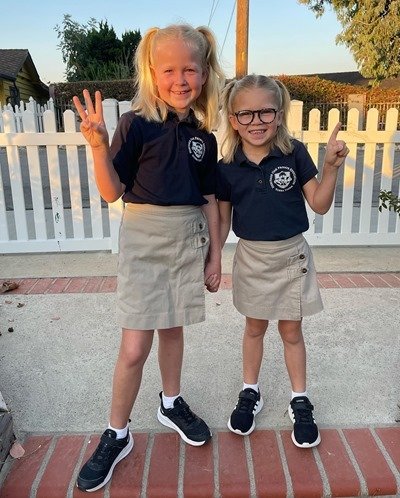 Meanwhile, over on the opposite coast near Los Angeles, our two Granddaughters Brynn (left) and Blair were also starting their first days of the new school year as well so school year 2022 is off and running! 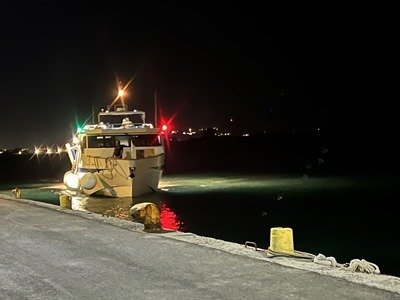 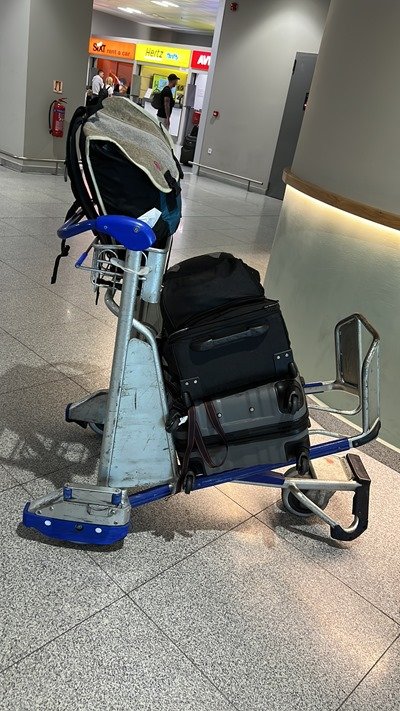 Oh, and did I mention that she was schlepping over 55 Kilos/120 Lbs of new bits and bobs for the boat and ourselves?!  However, very happy to report that all went amazingly smoothly, checked bags went all the way from Miami to Kos without any intervention or loss, but it still requires lots of energy and time with not much sleep in between.  She has slept VERY well the first two nights without any real sense of jet lag and we are both very happy to be back together and home. 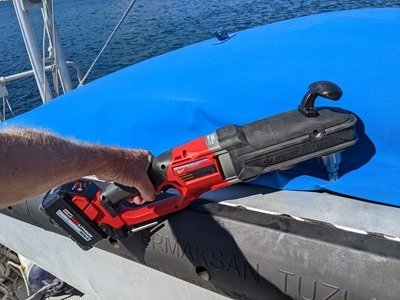 One of the many bits of kit for the boat Christine lugged back with her, and one of the heaviest, was this Super Hole Hawg as Milwaukee calls their monster HD right angle 18V drill.  Weighs in at 8 Kg/17.6 Lbs, has two reversable speeds and over 1000 FtLbs of torque. 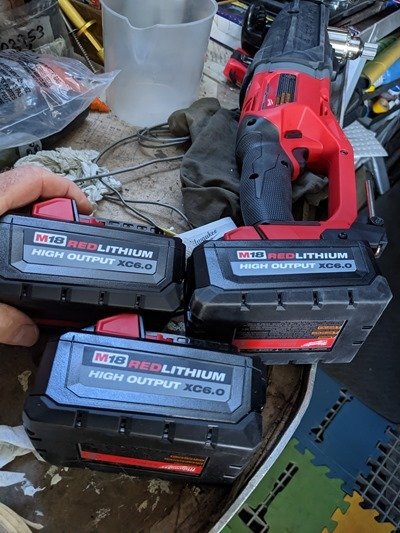 It is quite the beast and I was able to get a very good deal buying it through Home Depot with three of these super sized High Output 6Amp 18V lithium batteries which enables long continuous use between charges.

This is part of our style of doing prototypes of systems on Möbius that allow us to try out different ways of doing things and allow us to find out what is the Goldilocks just right way for us. 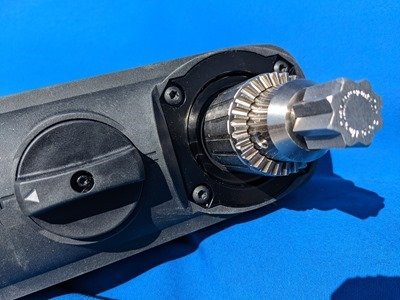 In this case we are trying out this way of converting several of our manual winches to electric.  I ordered this SS adaptor that fits into all our winches. 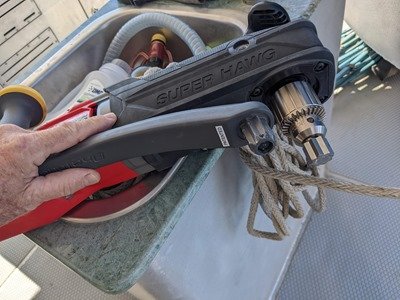 Almost all winches no matter the brand, use this same star pattern for their manual winch handles so this adaptor enables us to try out this powered winch handle on any winch we have so we can see which ones would make sense to convert to full built in electric systems. 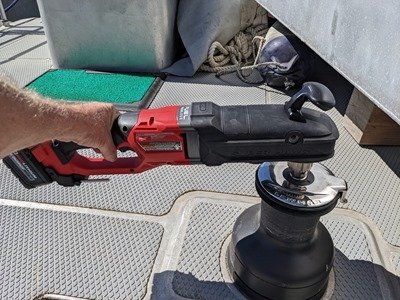 As an added benefit, this power winch handle will also give us an emergency back up for any failure of our already 24V powered electric winches such as this hefty Lewmar 65 on the Aft Deck. 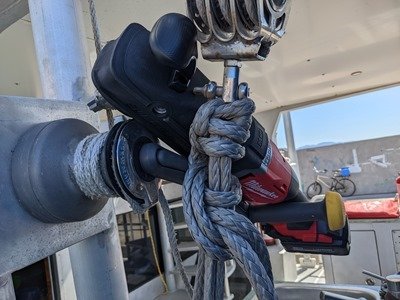 Two of the currently manual winches we are most interested in trying this out on are these horizontally mounted winches on the Tender Davit which we use to raise/lower the Tender in the Davit Arch.  Up to now we have been using the manual winch handles for this job which works well but we like to bring the Tender onboard every evening so this makes it much more convenient and faster.  I will let you know how it all works out once we have tried it out a few times. 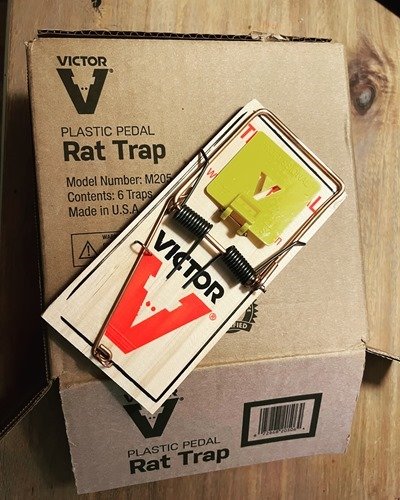 Much lighter and put to immediate use unfortunately, were six of these classic Victor rat traps which I was able to get delivered to Christine hours before she flew out of Florida.  A few days earlier I discovered that I had a new and uninvited guest aboard and these traps are the best way I know of to get them to leave.  Ruby and Barney donated a piece of their kibble for bait which I upgraded with a bit of peanut butter and had had several set out a few hours after we were back onboard Monday night.  A few hours later we heard the distinctive and loud SNAP! of the trap under the sink and I escorted dead Rat #1 off the boat.  Turned out he had two other buddies which were shown the same exit the next night and the traps have all remained undisturbed ever since.  Whew!

For most of the lines we have onboard we use synthetic braided line such as Amsteel or Dyneema as they have SO many advantages such as higher strength that same size SS wire rope, very light weight, easy to handle and they float.  As you might know or guess they are also quite expensive, especially when you buy them from Marine suppliers.  But a tip I can share with you is that the same synthetic line is also now being used extensively in applications such as power winches for off road vehicles, emergency response teams and the like and buying these lines through those outlets is a fraction of the inflated marine cost. 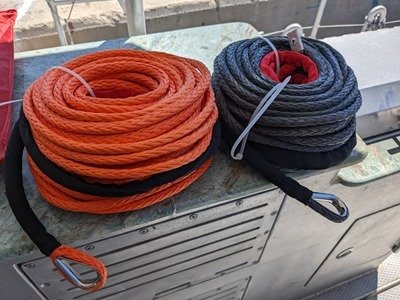 So these two 30 meter/100ft lengths of 13mm/ 1/2” Dyneema also found their way into Christine’s checked luggage. 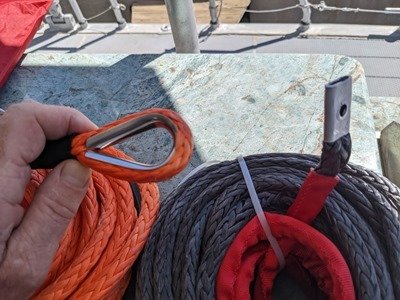 These two are made for electric winches on the fronts of 4×4 and Overland vehicles so they come with a SS thimble on one end and a crimped on fitting for the end that bolts to the winch drum but it is easy to cut these off so I can tie my own eyes, loops or whatever ends I need.  These two are going to be used for some of the rigging on our Paravanes which I now have everything I need and we can start testing out when we get underway again. 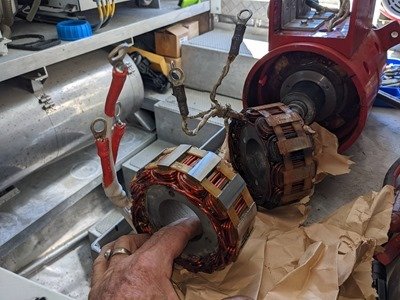 One of the other heavier items Christine brought back with her was this new stator coil for one of our 24V @ 250Ah Electrodyne alternators. 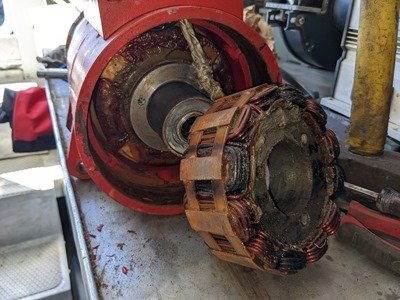 Due to a manufacturing error, there was a short in the external rectifier and as you can see every third one of the copper coils was burned out.  There are two of these coils in each alternator which produce the high AC current which then runs through the thick cables out of the Engine Room over to the external rectifier where it is converted into 24V DC current. 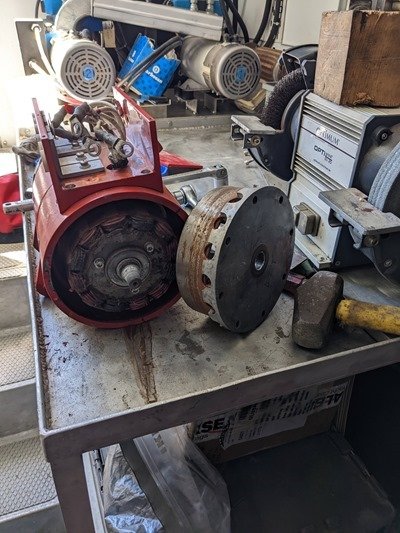 Electrodyne quickly sent a new replacement coil several months ago and this was our first chance to get it brought over to Möbius.  Fairly straightforward process to remove the old coil by first removing the aluminium Rotor that holds the permanent magnets for the alternator at this end.  The holes in this Rotor provide good air flow to keep the alternator cool.  These Electrodyne units actually have two individual alternators, one at each end of the Red housing but only the one on this end needed replacing. 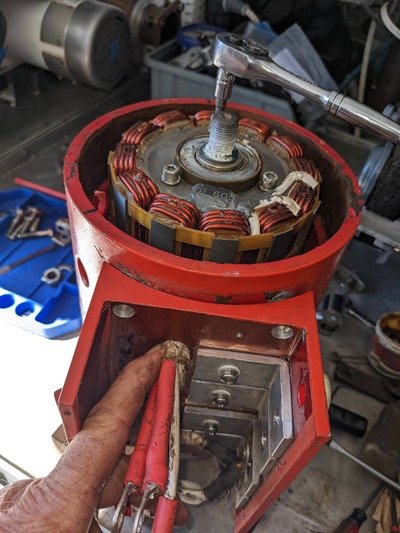 Once the old Stator windings are removed the trickiest part is fishing these three large gauge solid copper wires through the hole in the body of the alternator but just takes some time and holding your tongue just the right way.

Then I could bolt the new Stator windings onto the body. 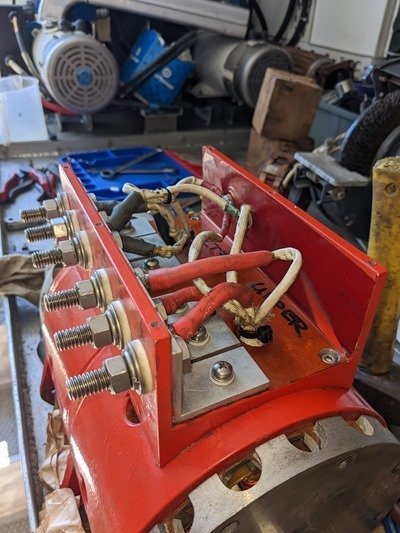 Rotor is bolted back on next and then all the wires inside the junction box up top can be attached to their respective studs. 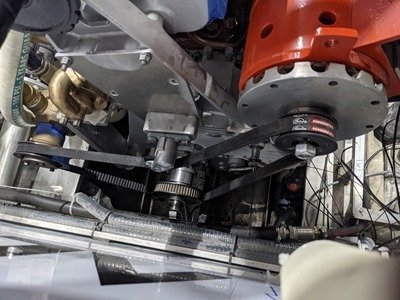 This upper alternator is driven by a cogged belt system I installed, driven by the crankshaft and also powering the bronze sea water pump you see on the far Left. 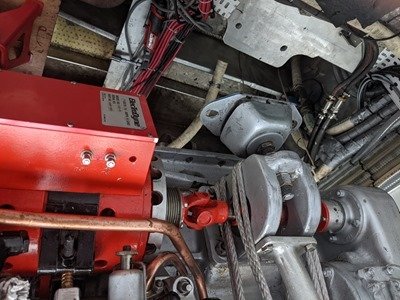 Further down, the second alternator is driven directly by the PTO shaft from the front Left of the engine.

Each of our Electrodyne alternators can provide up to 6kW of power and so with the pair mounted on Mr. Gee we effectively have a 12kW generator whenever he is running.  Each external rectifier is connected to a WakeSpeed 500 Smart Regulator which automatically look after balancing the two alternators and keeping the 1800 Ah House Bank fully charged.

Speaking of Mr. Gee, I am eXtremely pleased to let you know that I am flying up to the Gardner works on Tuesday to be there when the new engine is put through its paces on the dynamometer for the initial breaking in and to create a full data sheet and graphs of torque, horsepower, fuel consumption, etc.  I will be sure to take lots of photos while I’m there and be able to share those with you in next week’s update.

The new engine is due to start its return voyage back to us here in Kalymnos next Friday and hopefully will take “only” 3 weeks or so to get here.  Given that the shipping up to Gardner took over six weeks, that will actually be quite fast!  Everything is relative right?  Once the new Mr. Gee arrives here I will be able to provide you with more details of the installation and most excitingly the results of the initial sea trials so do stay tuned for that.

Thanks for all your patience with the change of pace the past few months and please do keep your questions and comments coming in the Join the Discussion box below.