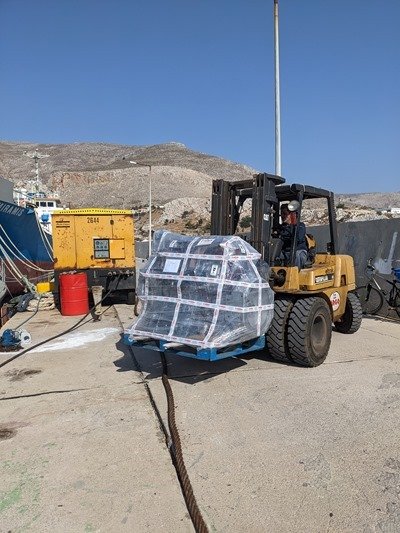 Well, finally finding the time to put together this quick update we have ALL been waiting for and <spoiler alert> let me just start with what you really want to know; yes, the brand new Mr. Gee version 2.0 is now fully installed and Möbius is back up and running!  This update will focus on the installation of the new Mr. Gee and then I’ll do a second one in a few days with outline of where Mr. Gee has powered Möbius to since we left Kalymnos last week on Oct. 30th.

Let me just say that since finally departing our four month home port in Kalymnos, we have now put about 600 nautical smiles under our keel and I am writing this to you from Marina di Ragusa down on the SE corner of Sicily.  We are waiting for the next weather window to continue our travels West and out of the Med across the North coast of Africa, and hope to leave tomorrow (Monday 7 Oct) or Tuesday so it may take me a few days to get that second travel update written and get some internet to be able to post it but do stay tuned for that.  Now, back to as quick a summary as I can do about the installation of the all new Mr. Gee.

It took almost two months for the original Mr. Gee to get from Kalymnos to the Gardner works in Canterbury England but fortunately the return trip was MUCH faster and “only” took about two weeks for this sight for sore eyes turned up on the dock beside us.  All still fully sealed up and just as it had been when it left Gardner Marine Diesel GMD the day after I flew back from being there for the full dynamometer testing that I outlined in a previous post. 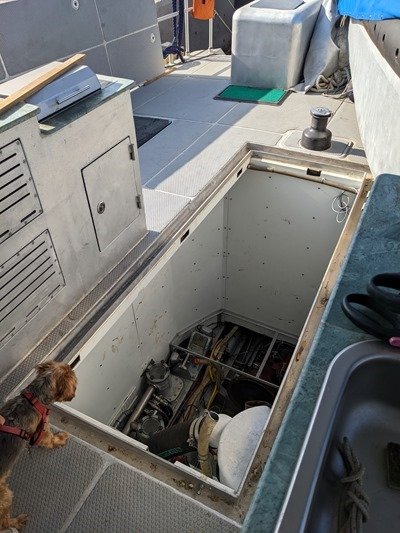 Even Barney was wondering when this abyss in the Engine Room was going to be filled up again and he was on hand to supervise the whole installation. 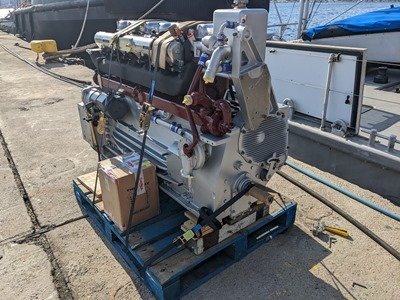 James and Michael at GMD had kindly included the remaining epoxy paint and put that in the box on the pallet. 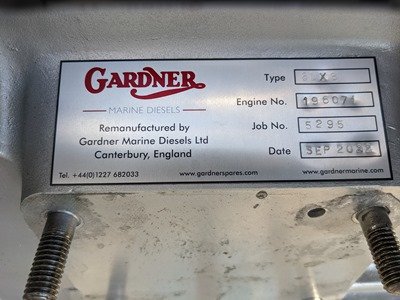 Manufactured September 2022 so can’t get too much newer than that! 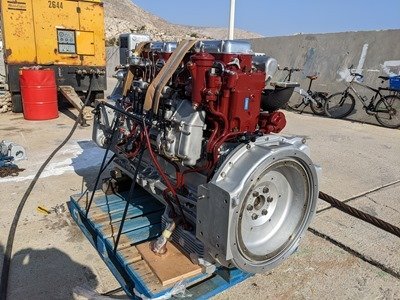 After SO much time and effort, it was sure a great feeling to unwrap this all new version of Mr. Gee and get busy preparing him for the installation. 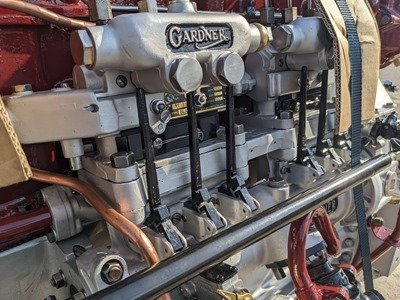 If you look closely at the brass plate on the fuel injection system you can see that it is currently set up for Continuous 100% use with 150 BHP @ 1650 RPM, and as some Gardner fans say these are “Draught Horses”! 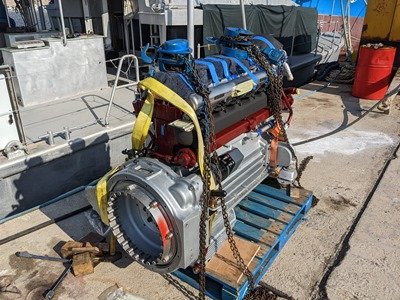 I spent a few hours reinstalling a few things such as the big Electrodyne alternator that is powered by the PTO (Power Take Off) as it was easier to do while sitting out on the dock.  Then I protected the polished valve covers up top with some foam and set up the two chain blocks front and rear for adjusting the angle of the engine as we lowered it in place. 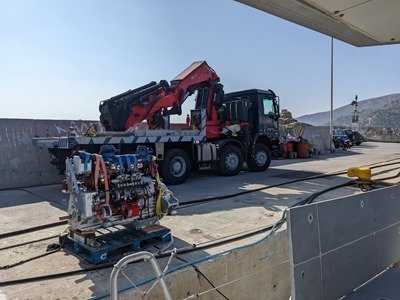 The crane truck arrived right on time which was also a nice change as the first time for taking the engine out, it took over a week to arrange. 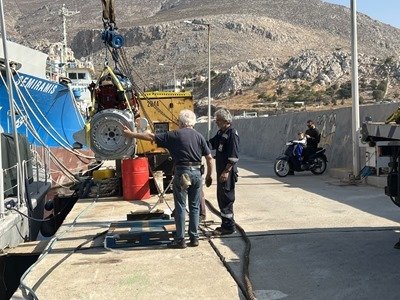 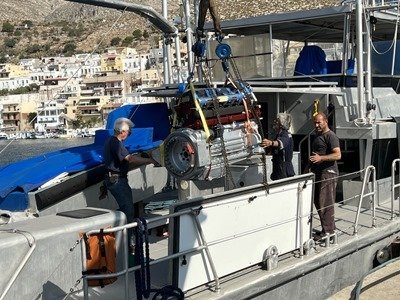 …… and onto Möbius.  Kind compliments of brothers Michael and John Psarompas who own Argo Oil & Tug Boat, two of the crew from the Argo Tug Boat behind us kindly came over to lend some extra hands to help lower the engine into the Engine Room and set the motor mounts onto the anxiously awaiting engine beds. 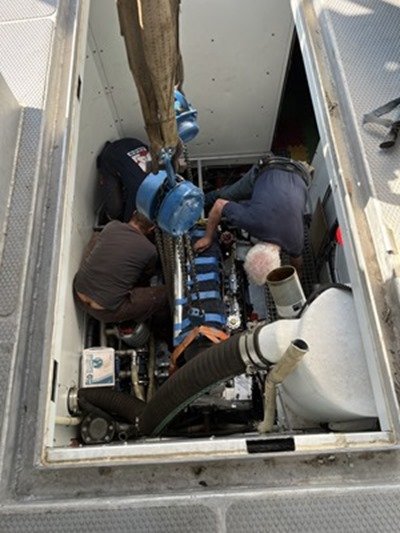 As many of you know this wasn’t my first rodeo wrestling Mr. Gee into place and with these four extra hands it all went quite quickly. 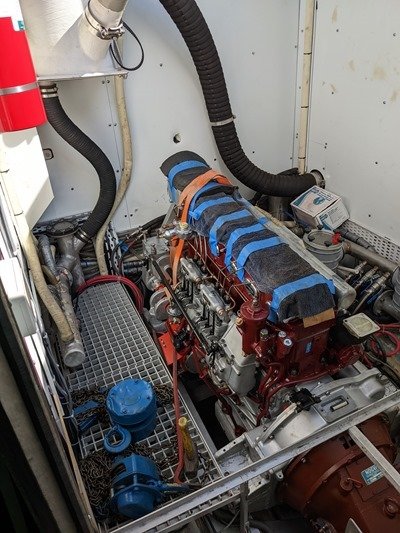 And the all new Mr. Gee was finally settled into his new home and mated up with the Nogva CPP Controllable Pitch Propeller gear box. 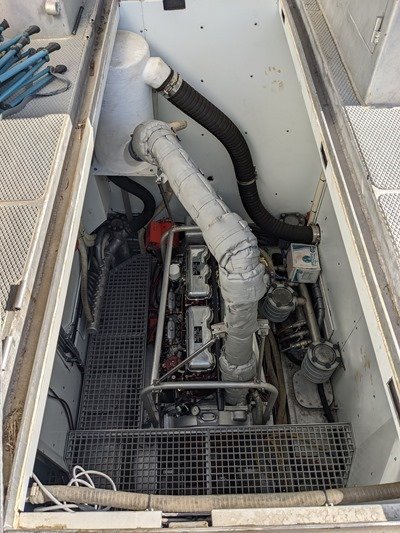 It took me about two days to remount all the systems such as exhaust,the second Electrodyne alternator (top left), fuel lines, engine guard bars and then do the engine/prop shaft alignment and torquing down the engine mounts to lock it all in place.Apologies for this quick and dirty video of the first starting of the all new Mr. Gee v2.0 but hope it adds a bit to how this all went.  I gave a bit of an overview before starting up the engine and then did a bit of a walk around of the engine to show things such as the oil pressure, exhaust water flow, etc.  Hope you enjoy! 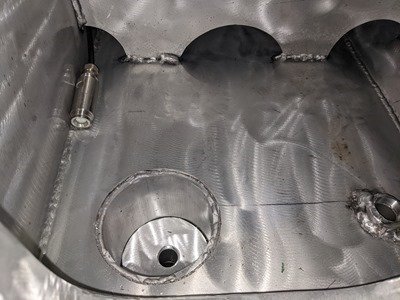 Out of both curiosity and safety I decided to pump the diesel Day Tank empty and open up the bottom inspection port to see how things had faired in the almost two years since the first fill during the build.  Very happy to find what you see here, aka NOTHING.  The sump you see in the lower Left had been doing its job of collecting some of the bits from construction and I had been able to drain these out previously as per the design.  Silver cylinder in the top Left is the Maretron pressure sensor for measuring tank level and the pickup outlet is over on the Right. 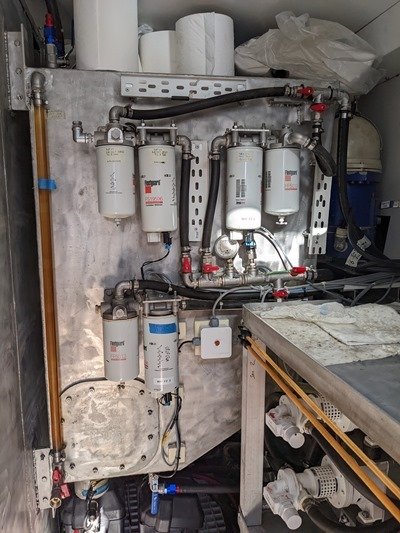 Bolted the inspection cover back on (lower left) and refilled this 660 Liter Day Tank with fresh clean diesel out of the main tanks. 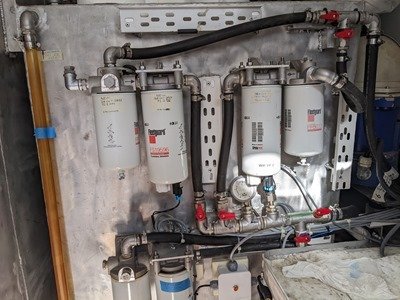 New engine called for new filters so installed these and bled them to get rid of any air. 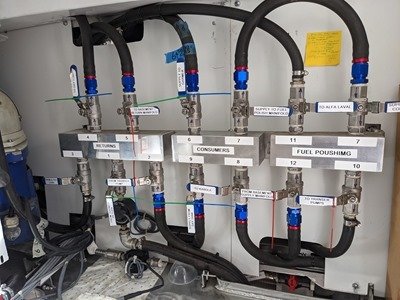 Also took the time to put coloured zip ties on each of the valve handles on the three fuel manifolds to help me double check that I have the right ones open or closed for different operations such as transferring fuel between the main tanks, polishing the fuel (aka cleaning), filling the Day Tank and of course the supply and return for feeding Mr. Gee when he is running. 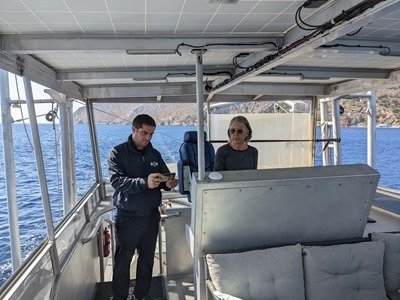 Once I had Mr. Gee and the rest of the systems on Möbius back up and running there was quite a bit of bureaucratic steps we needed to go through before we were allowed to leave.  The boat had been officially “detained” by the Greek Coast Guard and they required that we hire this engineer to prove that the engine and the boat was back up and running again. 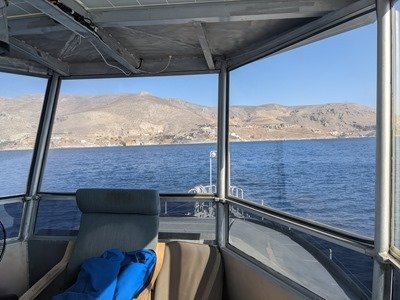 All of the various officials, offices and agencies all needed to collect their “pound of flesh” and ample Euros which took longer than the actual installation of the new engine! 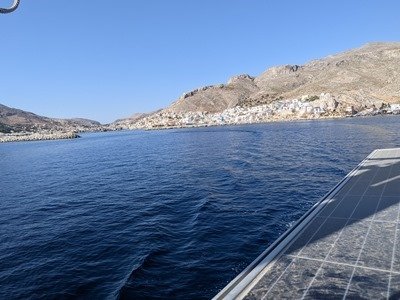 Last but not least, we completed a quick sea trial by doing a big loop outside the harbour with the engineer aboard and we finally had the green light from him and then went through another round of approvals and payments to all the agencies in town but by end of day on 29th of October, 2022, almost four months after we first arrived, we were cleared to depart Kalymnos! 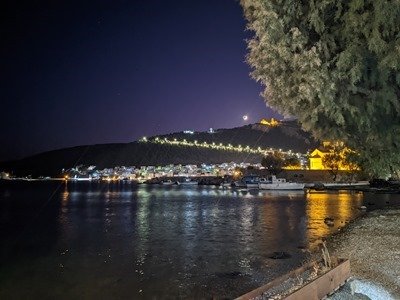 We treated ourselves to one last “date night” on this lovely island of Kalymnos that had come to feel like home and reminded ourselves of just how fortunate we had been to have had the opportunity to get to know this small Greek island and so many of her wonderful inhabitants who had become so familiar and were all so kind and generous to us.

Thanks for the memories and Bye Bye Kalymnos!  We feel SO privileged to have had this extended time to get to know you.